Shirl over at Shirl's Gardenwatch just put up this drool-worthy post about a new Piet Oudolf garden that she discovered this summer at Pensthorpe, in the UK. If you're already a Piet fan, it's a must-see post... and if you're not already enamored of his work, you might be once you check out this new garden!

A mystery plant in one of the photos Shirl posted really caught my eye. Dark foliage, pretty form, great texture... it's not much of a surprise that I had to ask Shirl about it. Seeing the small-sized picture, I guessed that it might be a young, dark-leaf barberry. Shirl wasn't sure what it was, either, but didn't think it was a barberry. She was nice enough to send me her original picture of this area, though, so I could zoom in better on the plants in question... and I agree with her that it probably isn't a barberry.

Anyone want to take a crack at an ID for us? I uploaded the large-size original photo that Shirl emailed me, so you can click it to see the plants in better detail. You can see them behind the sedums in this picture:

We both agree that it probably isn't a barberry (berberis) but haven't hit upon a positive ID yet. My best guess is black cow parsley (anthriscus sylvestris 'Ravenswing') but that's just a guess. I get the impression that this plant is much more fine-textured even than the cow parsley... but I have never seen that growing in person, so I really have no idea.

Shirl and I both really like this mystery plant, and of course feel like we "need" to add it to our respective gardens now that it's come to our attention, so any and all attempts at an ID will be much appreciated! Even if you can "only" help us rule out some of the possibilities, that would be great... :)
Posted by Unknown at 5:20 PM 25 comments:

Between a huge all-weekend event at work and the added excitement of being in a wedding on Saturday (congratulations to my friends Matt and Meagan!)... I feel like I'm so far behind in the garden, on the blog, in the house, and in life in general, that it will take me weeks to recover. Luckily, I also have a couple of weeks of vacation time that I need to "use or lose" by the end of this month, so I'm going to take advantage of them as much as I possibly can.

After spending a few hours at work today tying up some loose ends, I came home to find the late afternoon sunlight doing amazing things to the front yard garden. I greeted the dog, grabbed the camera, and then walked right back outside the door to capture a few shots. I was particularly struck by the gorgeous view my neighbor Carrie has of the Japanese anemones right now: 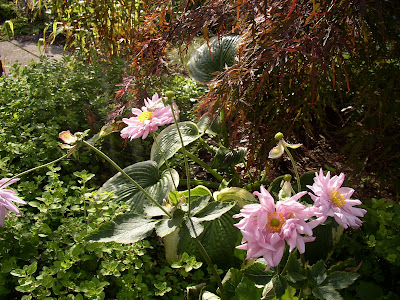 Very nice, since the area is covered in golden oregano and the anemone leaves probably look a bit weedy to her most of the year. By the way, did you notice how well the flowers on my 'Party Dress' double anemone are standing up on their own? If not, here's another chance to see them: 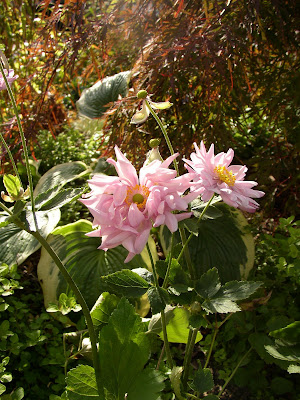 Does anyone else ever check out their garden from the neighbor's view? From my side of the Japanese maple, the view is not quite so dramatic but still pretty. The darkening seedheads of Northern Sea Oats look dark against the 'Purple Dragon' lamium, but light against the Japanese maple foliage: 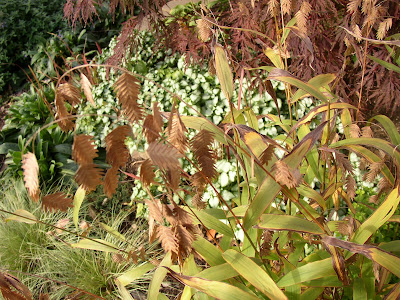 Brown is still an exception, though. Red, gold and silvery blue seem to be the staples in my fall front yard garden. The 'Golden Sword' yucca looked a little frail and ratty all summer long, but the cooler temperatures (and maybe the approach of the 1 year anniversary of this garden planting?) have really caused it to perk up: 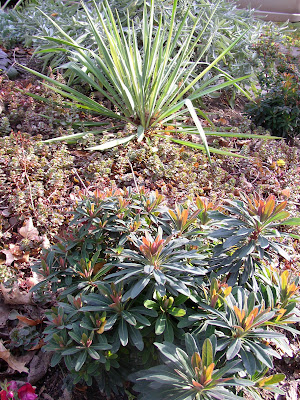 I admit, I don't particularly like the culinary sage behind it, but that will all be harvested this fall to make way for a shorter edging plant that will better show off the golden yucca leaves, too. (I have plenty of culinary sage in the back yard already.)

Notice the bright red snapdragons in the lower left corner of that shot? The snapdragons have really taken off in October. Here's a shot of another red one peeking out from beneath the flowers of 'Hameln' pennisetum, as seen from the front porch stairs above: 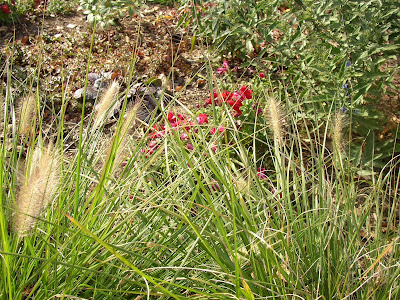 A short distance away from the reds, a self-sown seedling that's blooming in white instead of red also looks nice between 'Hameln' and a baby sea kale: 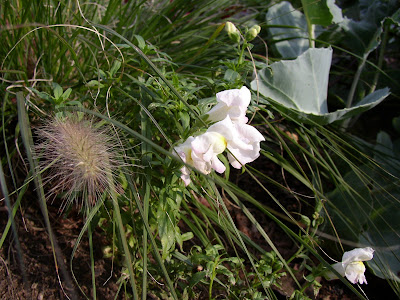 Also near the sea kale are the dramatic flowers of 'Black & Blue' salvia. I love the flowers with the variegated culinary sage, sea kale, and brown sedges... but I admit that I wish the foliage was a little darker! 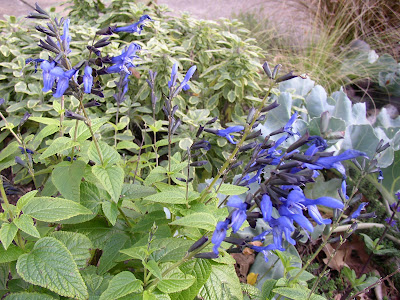 My front yard urn container will have to be dismantled tomorrow so that I can overwinter the cordyline, 'Bonfire' begonia, and maybe even the eucalyptus. (Does anyone have any hints on the eucalyptus? I'm 0-for-2 on overwintering them, and I'll take all the help I can get!) But right now the silver plectranthus (right) and coleus caninus (left) are contributing some unusual blooms to the urn: 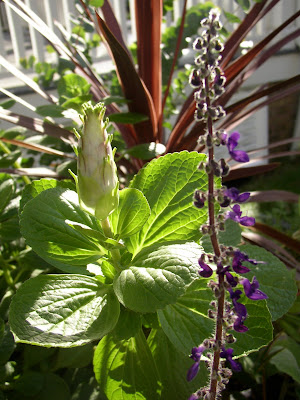 As in the front yard, the back yard is more about the foliage than the flowers. And I love the way the low slanting fall and winter light picks up a fresh green color in this pulmonaria, which otherwise shows a very flat silver hue: 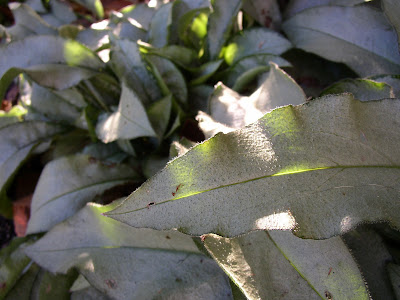 There are some blooms in the backyard garden, though, including the delicate little toad lily flowers that have opened to distract you from the plant's chewed leaf edges: 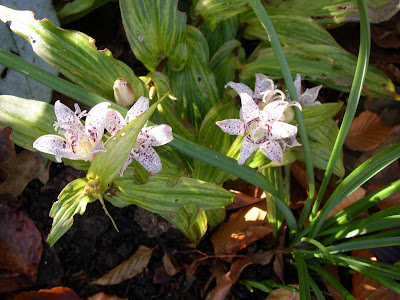 I technically missed Garden Bloggers' Bloom Day for October, but I'm still going to type out my full list of things that were flowering on that day here. It's such a wonderful reference tool, to remember what was in bloom, when, that I definitely want to keep up on that! And after I finish my post and get a little better caught up... I'll be catching up with what's been in bloom in other areas of the world this October, too. :)

I was listening to something on the radio the other day (or did I read it?) where a poet made an interesting comment within his explanation of what distinguishes "mere" poetry from great poetry. He said that part of the allure of flowers is that they are the beautiful proof of the existence of something living--something that is definitely going to die.

Autumn has always been my favorite season, and part of that might well be that I agree with his assessment. There is a poignancy in that fleeting life that accentuates their beauty, and the many tints and colors that plants take on during the last gasp of fall only serve to highlight that.

Cooler weather, for one, tips red the leaves on my doublefile viburnum, brightens my golden oregano to a fresh chartreuse, and frosts my purple sage with a pretty lavender shade: 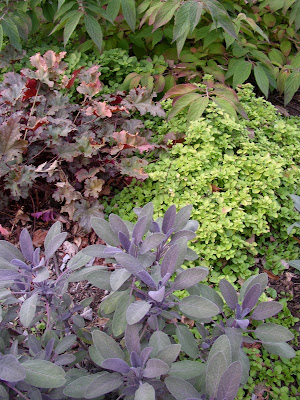 It also causes new leaves to emerge from the tired heucheras that I grow in too much sun, just becuase I want them to be where they are from a design standpoint. Some autumn-emerging leaves emerge the same purple-green as the summer leaves, but many of mine emerge in shades of pink and peach: 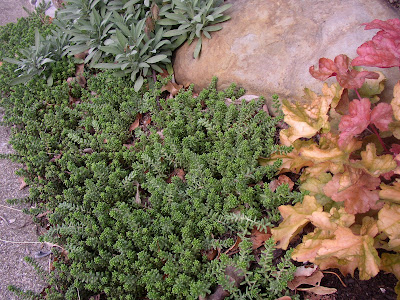 On the north side of the doublefile viburnum, the leaves are more than tipped red, and they combine nicely with the blue foliage of the catmint that hasn't stopped blooming for months: 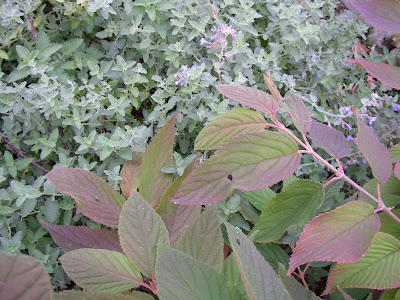 Sometimes, cooler temperatures and fall rains cause very good surprises. Mr. McGregor's Daughter and I have both found that 'Party Dress' Japanese anemones are more like groundcover anemones, sprawling over their low-growing neighbors with abandon. Between the rain and the cold we've had for the past couple of weeks, this is the most upright I've seen them yet: 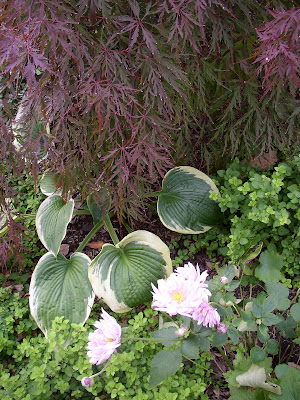 I do have an oft-stated theory that the best way to get a plant whipped into shape is to threaten to remove it, and/or complain about it. I'm not sure if MMD's post about the truth behind Japanese anemones has helped my luck with 'Party Dress,' but it sure hasn't hurt. Here's another look: 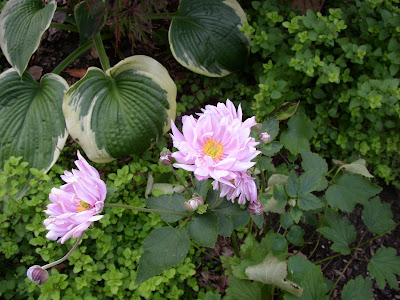 One of the things I particularly like about fall is the way that disappearing foliage makes you notice and appreciate things in the garden that are obscured by flashier summer fare. In the "dry lock garden," I really like the browns of these rocks with the blue fescue and 'Blue Spruce' sedum: 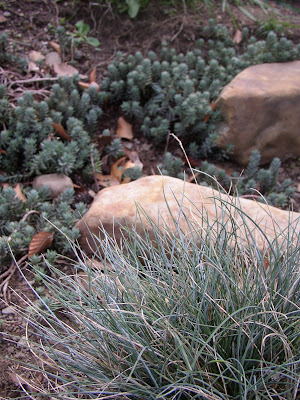 And I love these dark little berries on my 'Skypencil' Japanese holly: 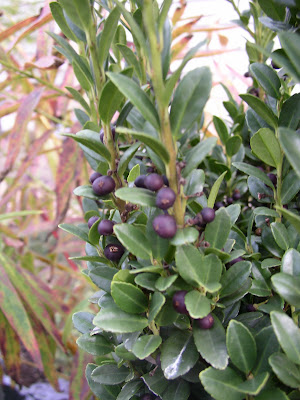 I even love 'Matrona,' now that her sickeningly sweet shade of first-flowering pink has deepened. She combines well with 'Hopi Red Dye' amaranth, and a jolt of dwarf zebra grass causes a clashing that I would hate in June but fine interesting in October: 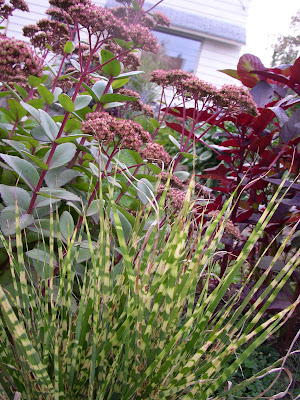 Lest we think that all is about done for the year, remember that there is still room for new growth! I needed these 2 'Midnight Reiter' geraniums, 4 'Key Lime Pie' heuchera, and 3 sedum sieboldii like a fish needs a bicycle, but at $2 each I couldn't resist: 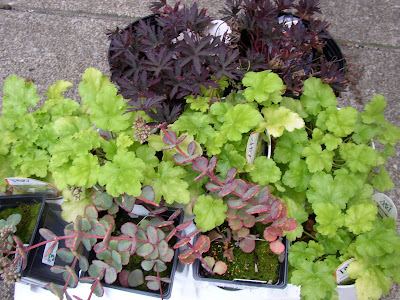 I can always fit in sedums, and the geraniums will join another 'Midnight Reiter' that I think needs a friend. I'll be honest, though: I have no idea where to put the heuchera at all! I'm thinking that I may just sink the whole pot into the ground over the winter, and then dig them up in the spring to use in containers. Who knows where they will end up, eventually.

And then, there's this new plant: 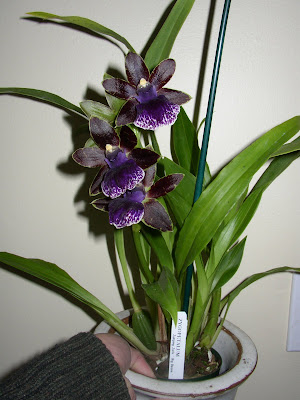 This dark beauty is an orchid, part of my bridesmaid gift from my friend Meagan. I have it in the pot you see temporarily, but we also went to a paint-your-own pottery place to make official ones. I am both scared and excited to see mine... it's one of those things that will either turn out really well, or absolutely horribly! We'll see.

In any case, Meagan's wedding is coming up next Saturday, the 18th. I have a few things to get together by then for the wedding, and this is also my busiest week of the entire fall at work... so I will continue to be scarce on the blog. (Although I'll try to make Garden Bloggers' Bloom Day!) I do have a lot of half-finished posts in the queue, though, so maybe when things settle down later in the month I can play a little catch-up.