The Best Watermelon I (N)Ever Grew... 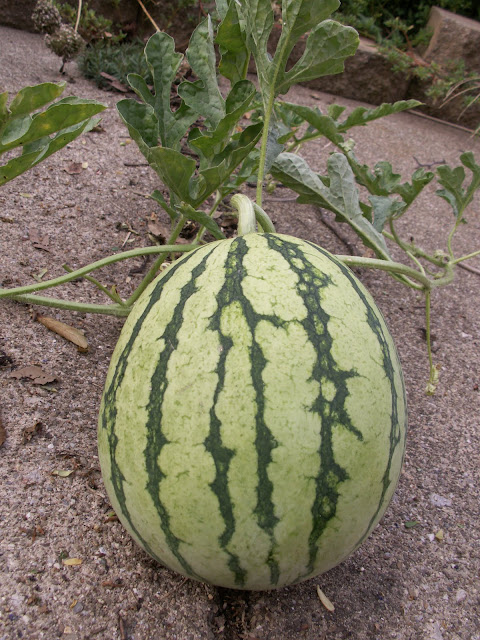 Isn't it a beauty? Bigger than any of the ones I grew last year, and still growing!  I didn't have a hand in planting it, however, I was just smart enough to let it grow.  Ma Nature decided to seed this watermelon next to the driveway and remind me who's really the top gardener around here.  (As if I could forget!)

In the end, I still win--I will get to enjoy its deliciousness in a few weeks.  :)

Color vs. Texture: Which is Your Favorite Type of Contrast?

I posted a LOT of silvery shots yesterday for the August Foliage Follow-Up, so I thought that it might also be interesting to show the only two non-silver photos that ended up on my hard drive after my foliage-focused garden tour. After uploading the photos, I realized that they illustrate two very different types of contrast that I play with in my garden: Color contrast, and texture contrast. 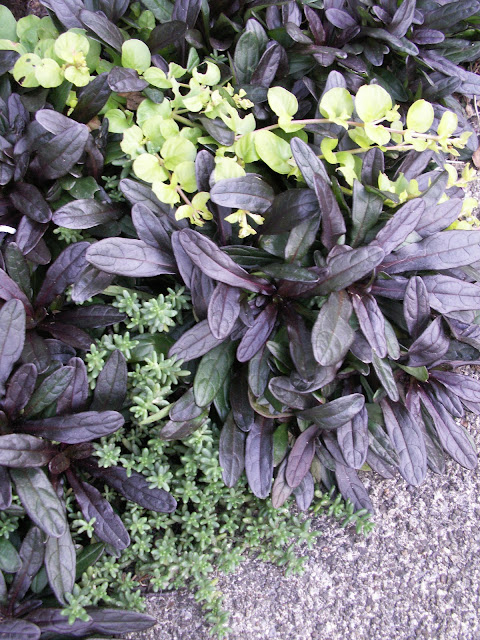 Mega-watt color contrast:
Green 'Chubby Fingers' sedum, dark 'Chocolate Chip' ajuga and golden creeping jenny mingle amiably on the edge of the driveway garden.  In a closeup photo like this, you can see some textural contrasts as well... but in the grand scheme, when you are viewing the garden from normal height, these small-scale groundcovers all provide a similar, fine texture for the garden floor. 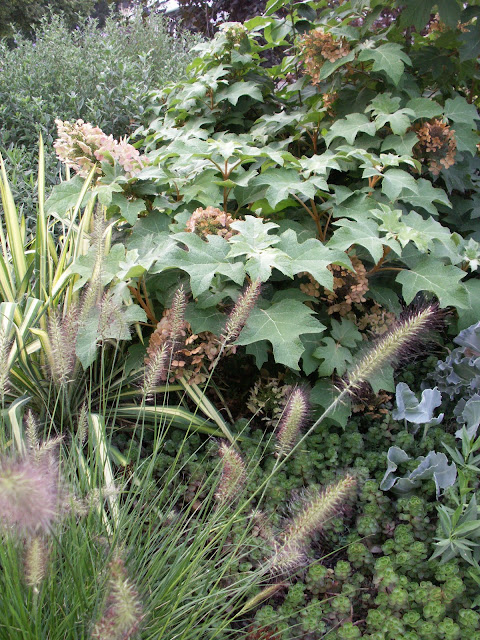 Textural contrast:
'Hameln' pennisetum, sedum spurium* and oakleaf hydrangea. All three plants feature a medium shade of green, with reddish/brownish accents in their flowers, stems and leaves... but the oakleaf hydrangea leaves are bold, and the fine-textured sedum and grass differ in leaf shape for additional textural interest.
Foliage contrast is much more obvious, of course. It's like the tight minidress that flaunts a woman's assets and leaves little to the imagination. Textural contrast, to continue the fashion analogy, is more like the dress that looks demure from the front but is (surprise!) completely backless and drop-dead sexy.  I enjoy using both kinds of contrast in my garden, along with some plant form contrast thrown in for good measure. (And a few areas of low contrast, too, to give the eye a place to rest.)

So what kind of contrast do you all employ in your own gardens? Do you tend to steer clear of all contrast, or do you find that one type of contrast is more pleasing than another to your eye?  I'd love to hear everyone's thoughts on this... particularly as a have a few garden areas to revamp in the coming year! 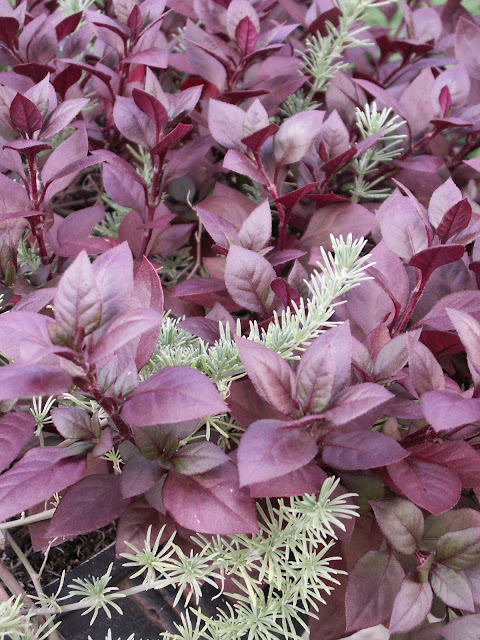 Each month, when the Foliage Follow-Up rolls around, I walk around in my garden and take pictures of anything and everything that catches my eye. Back inside, I scroll through the new photos to look for a common thread--and sometimes make a second trip out for even more photos that fit my chosen theme.

This week, no additional trips were necessary: The "Silver Foliage" theme came through loud and clear, with frosty plants making an appearance in all but two of the pictures! Silver-foliaged plants are usually hardy, drought tolerant, and shrug off the heat of the summer... so it's no wonder that they are putting on a great show right now. Here's a quick roundup of a few favorites: 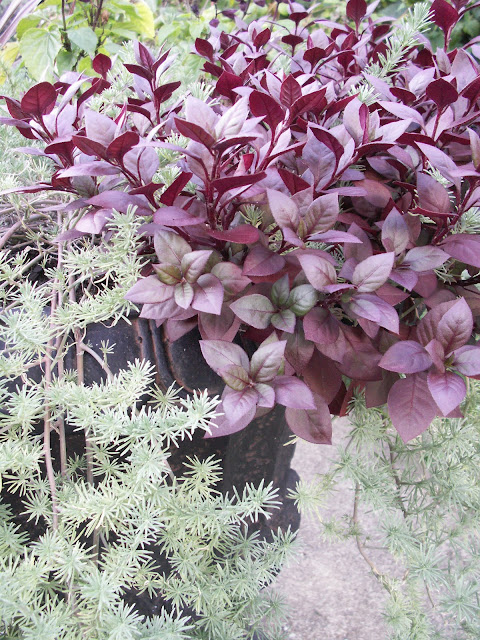 One of two silver lotus vine I have planted. This one (also shown in the first photo) began life in a hanging basket and now lives in the urn along with purple alternanthera, 'Vista Burgundy' salvia, celosia and a red spike. 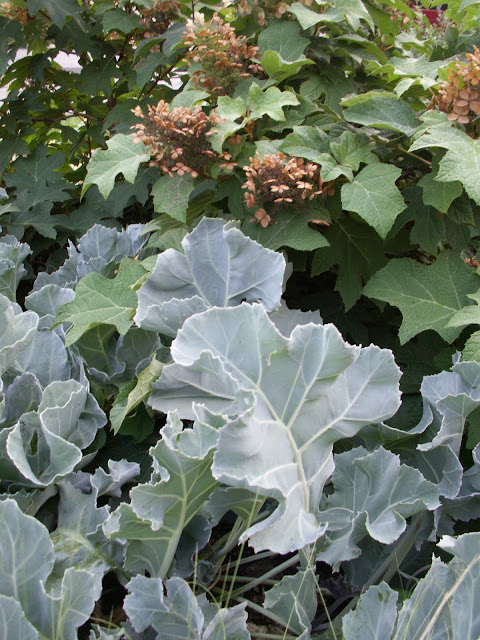 Powdery blue sea kale leaves hold their own against the bold foliage of the oakleaf hydrangea. 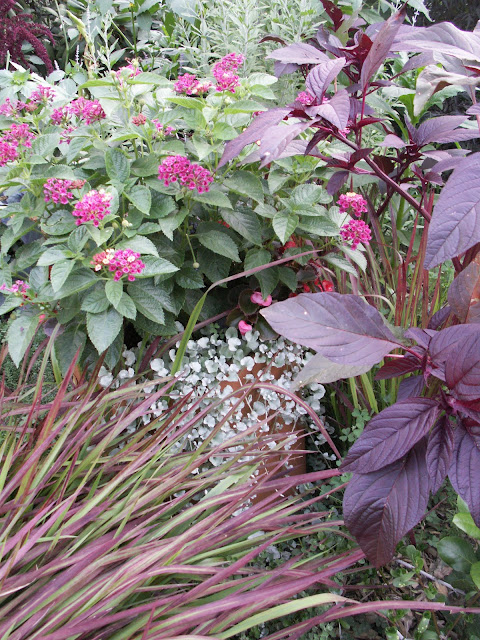 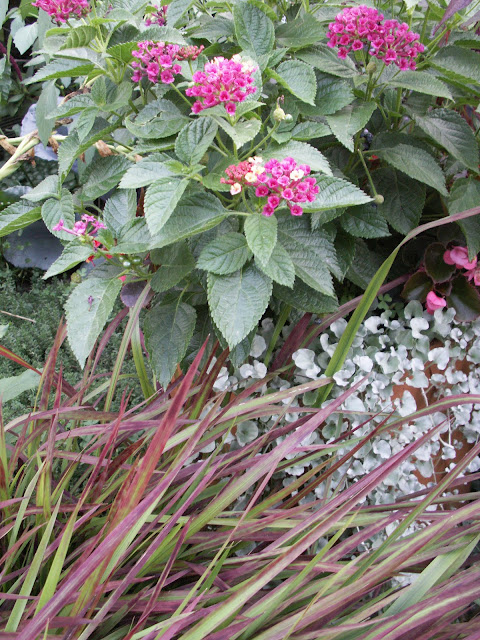 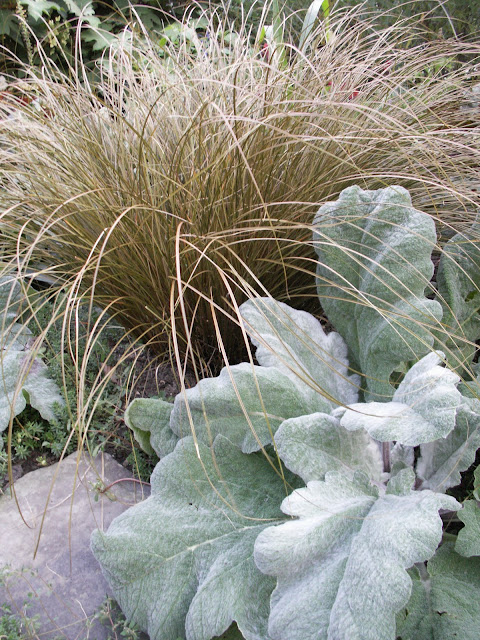 You knew this was coming: A photo of my latest obsession, salvia argentea (a.k.a. silver sage). 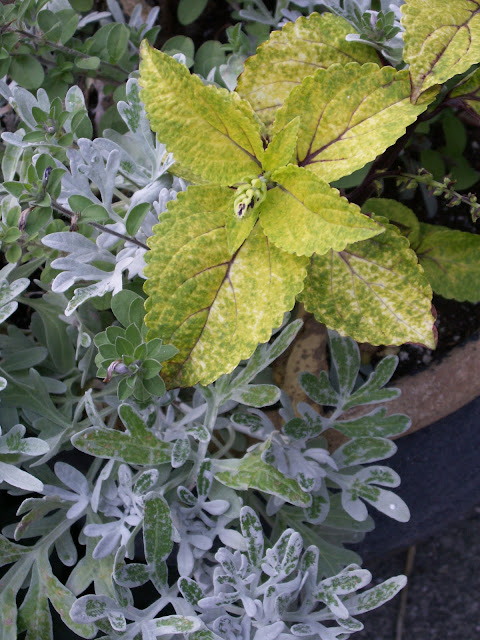 I like dusty miller in general, but my inner plant snob only seems to remember the many ways it is usually abused in yards around here... and urges me to buy something (anything) else.
This year, we were able to compromise and plant 'Silver Cascade' (above) along with 'Blue Daze' evolvulus, a feathery magenta celosia, and a coleus that looks an awful lot like 'Wizard Pineapple' but came as part of an unnamed multipack. 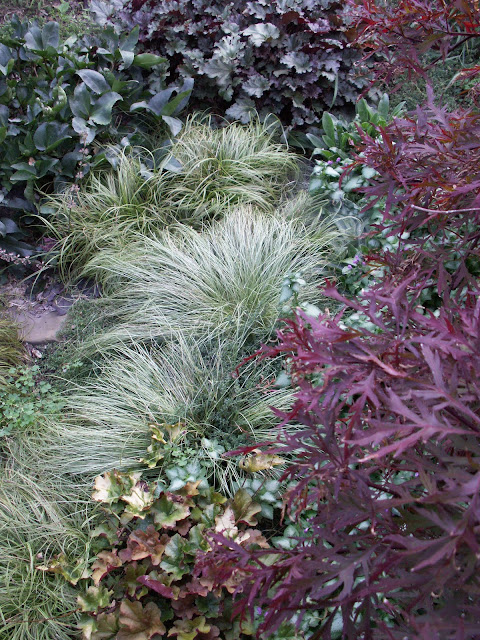 Two silvery plants in this photo, to end the silver streak: 'Purple Dragon' lamium sprawls out from beneath the Japanese maple, and short fountains of 'Frosty Curls' carex comans froth up between 'Beetlemania' carex, 'Ivory Prince' hellebores, and various heuchera.
Hope you enjoyed the silver rush here in the August Foliage Follow-Up. For more great foliage from around the world, check out Pam's August Foliage Follow-Up over at Digging! 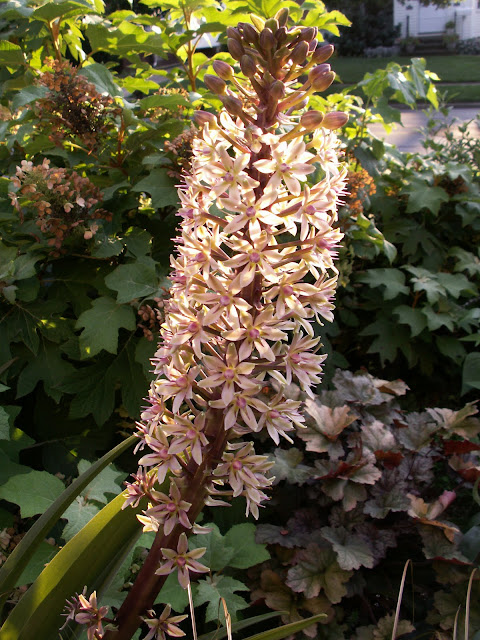 'Sparkling Burgundy' eucomis, heuchera, and oakleaf hydrangea
August is always an exciting, but bittersweet, time in the garden. It's exciting to see the late summer bloomers, like the Japanese anemone and the pineapple lily featured above, return. And it's always fun to see where the tall verbena decide to reseed themselves. 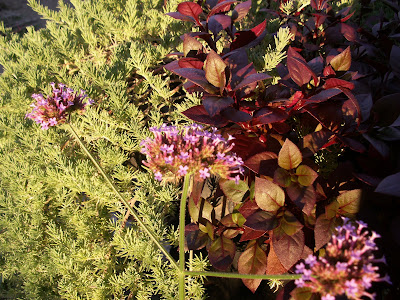 Verbena bonariensis, stretching from a tiny driveway crack to mingle with the urn plantings
At the same time, may of the tropicals hit their second wind: 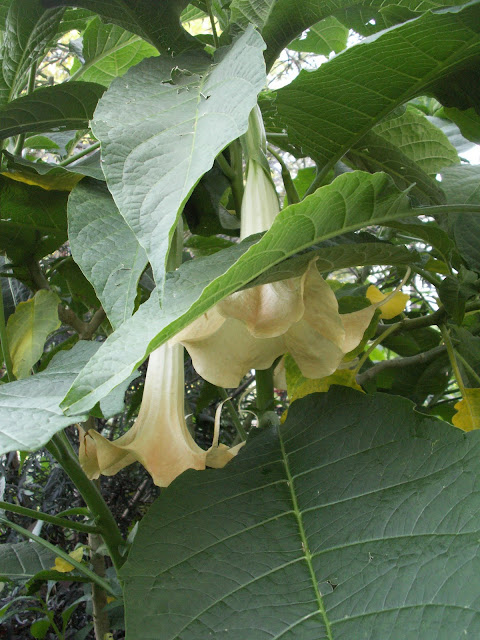 Unknown brugmansia, a cutting from the botanical garden a few years back
And it's always fun to see how well the drought-tolerant annuals have fared.  In the front yard, that means the usual snapdragons, portulaca, and 'Black and Blue' salvia, along with the new-to-my-garden "Mexican sunflower, a.k.a. tithonia. 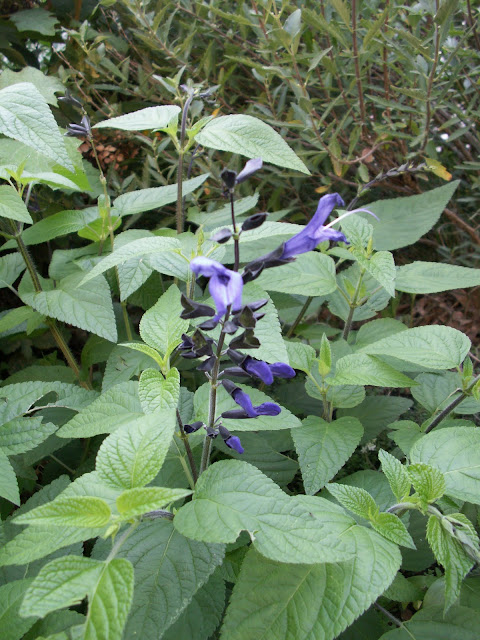 Salvia gauranitica 'Black and Blue' in front of a blue caryopteris 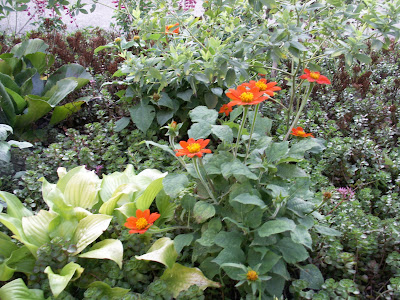 Unnamed orange-flowering tithonia, emerging from red sedum.
(Highlight provided by 'Sun Power' hosta.)
In the backyard, the drought-tolerant 'Vodka' wax begonias are joined by a different variety of lantana than I usually plant, and a surprisingly drought-tolerant fuchsia: 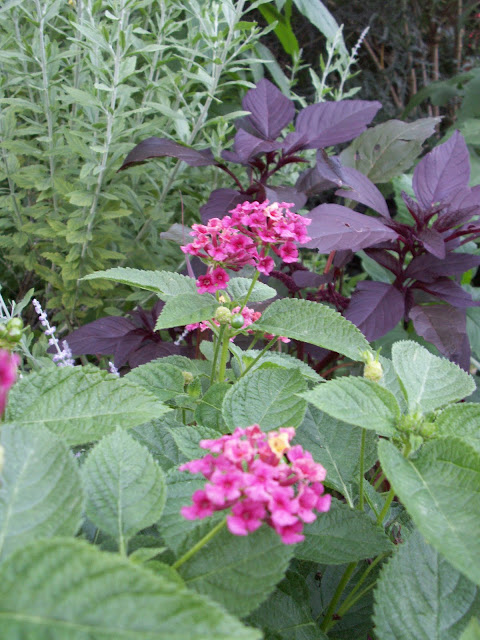 'Bandana Cherry' lantana--the flowers on this are so variable in color that I'll definitely choose a different variety next year. 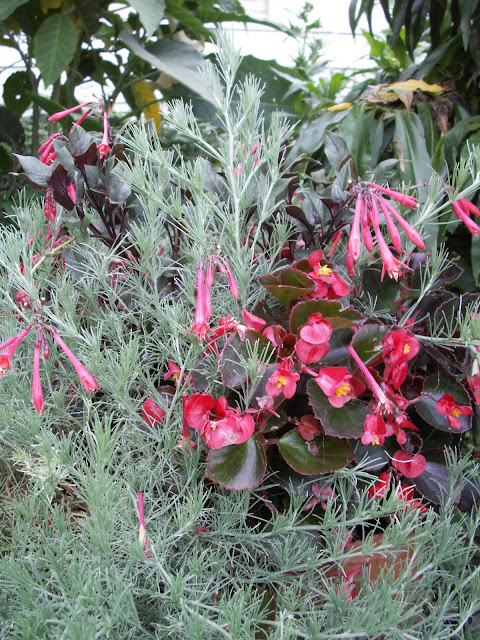 The bittersweet part of August comes with the knowledge that there are mere weeks left of the growing season. So many good intentions and best-laid plans have come to naught, so many missed opportunities have passed me by. There's nothing to be done about it now, though, except enjoy the last big flush of the native honeysuckle agains the neighbor's house and the blue sky... while I still can. 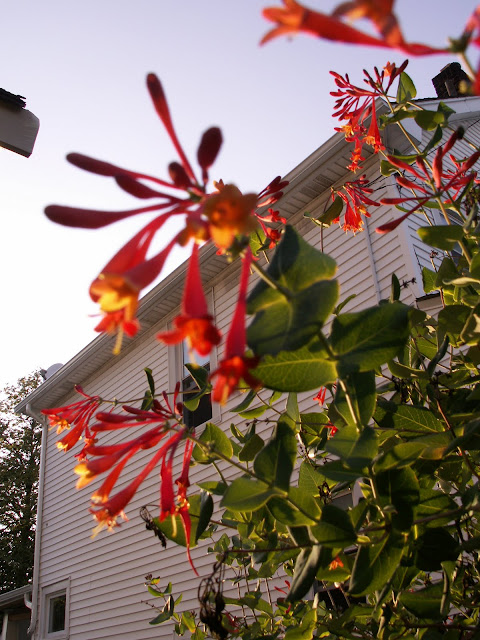 I'm not sure where there is anything quite as adorable as a baby vegetable... and this eggplant is TINY. (See the light purple eggplant flower hovering at the top of the photo for comparison.) 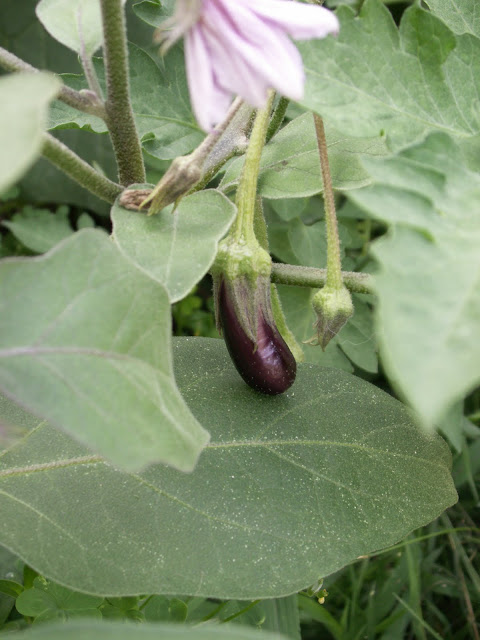 These are the delicious, never bitter, super easy to grow 'Ichiban' japanese eggplants, by the way. I fell in love with them maybe 5 years ago, and I don't foresee a time when I will want to trade them for another type. They're simply perfect.

A Lot Going On (in the Front Yard Garden) 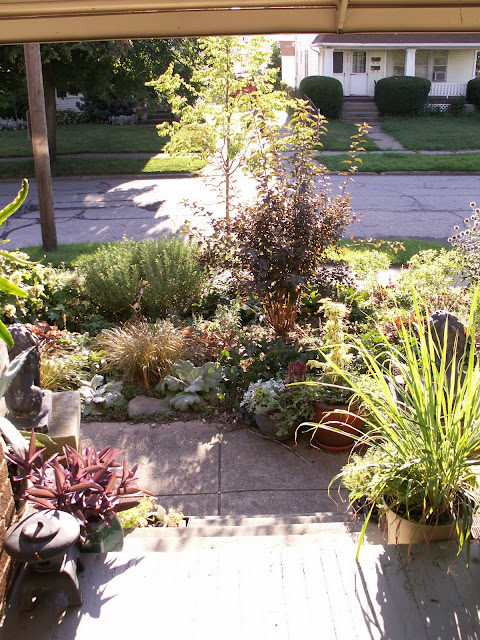 There's a lot going on in the front yard these days. Lots of color (even though there are few blooms) and lots of texture through the many, varied plants that reside there.  It's finally starting to look like the drought-tolerant tapestry that I had envisioned! 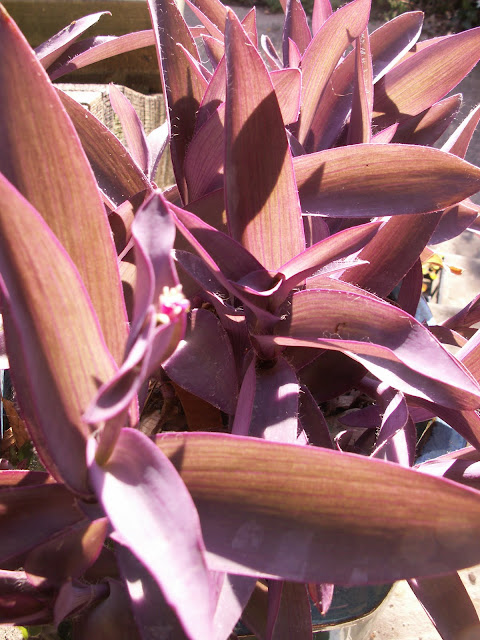 I know that I have mentioned this before, but one of my favorite things about the front yard is the way that the evening sun provides pretty backlighting that just makes all of the foliage colors glow. These purple heart leaves are normally so dark that they appear to be almost flat in color, but when they are backlit, they show an amazing amount of shade variation and detail. 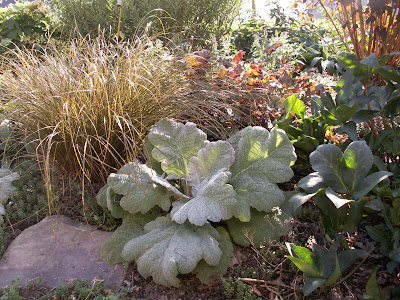 Even the silver sage, salvia argentea, is transformed by the setting sun. Its thick, downy leaves show off glowing light green patches and some pretty veining detail. 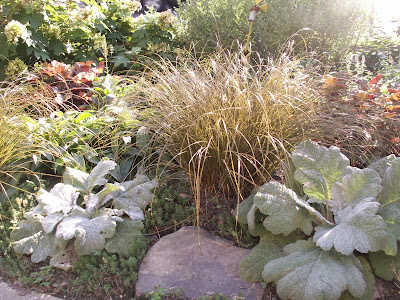 The salvia plants themselves offer up a nice textural counterpoint to the fine-foliaged sedums and brown grasses (mostly carex buchannii) in the front yard. 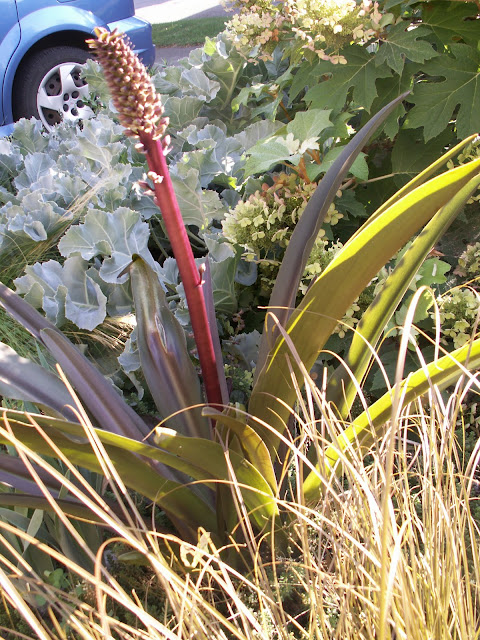 Right next door, sunshine turns the leaves of my pineapple lily ('Sparkling Burgundy' eucomis) to shades of yellow-green. You can really see the color contrast when you compare the green leaves to the burgundy ones in the background that are shaded by the oakleaf hydrangea. 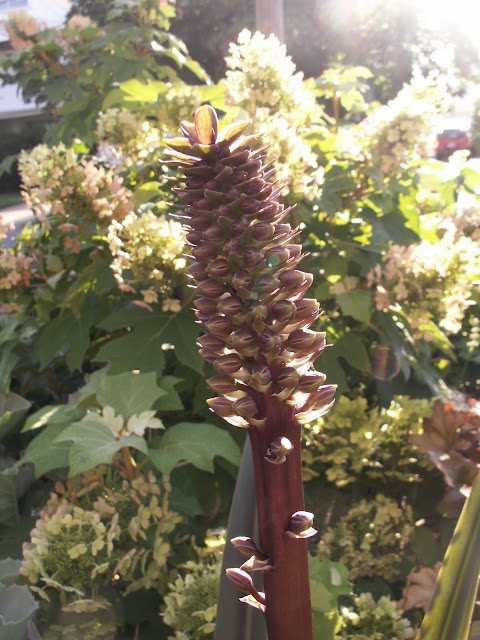 And yes, once again I am looking forward to the pineapple lily's bloom! I love how the color of the stalk and buds are picked up by the rosy tint of the oakleaf hydrangea in the background. I try to tie in a few things like this throughout the entire front yard garden--it helps to keep the garden looking like a cohesive design, rather than a mishmash of randomly chosen plants.


More of a tour of the new front yard garden to come... but probably later in the week. It seems that we have more thunderstorms in the near future here.  I never mind thunderstorms, but I really wish that they would cool things off a little bit. The tomatoes might be loving this weather, but my sled dog Garden Assistant definitely does NOT approve!