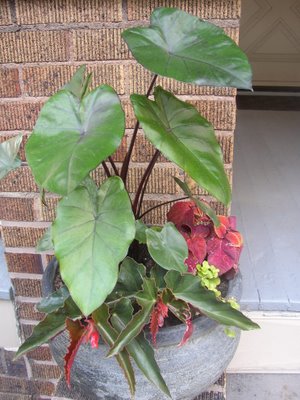 We really need to talk about the living conditions in here. All of us would like a little more breathing room, for one thing.

Breathing room? Your living quarters aren't supposed to be spacious, you know. The experts all say to plant containers so that they look finished from the beginning, not so that you're still waiting for it to finally fill out in August.

Oh, I see how this is going to go. You're going to act like there isn't a problem here, aren't you?

What do you expect? I'm German--we're known for being stoic. There are no problems, just changes of circumstance.

You're not all German. There's some Welsh and Spanish there too.

A tiny smidgen of Spanish. And the quarter Welsh only means that I just might be able to spin a good yarn about this whole thing at the end of the season. But you're digressing here--like I said, the main point is that it's a good thing for you to look full.

Oh, looking full is no problem. We can look full all day long... or at least until that big guy in the back finally crowds us out and we all have to jump ship. Look at his size. And it's only June!

Well, yeah, I am surprised about that. I figured he wouldn't like me and wouldn't grow very well. But he has his own separate pot sunk into your container so his growth will be limited, I promise. If he gets to be a problem I may move him to separate living quarters. Until then, you can just ignore him. Kind of like the elephant in the middle of the living room that nobody wants to talk about.

Verrrrry funny. I take it that "stoic" does not indicate that one has a really good sense of humor, eh?

Oh, just shut up and keep looking pretty.
Posted by Unknown at 12:34 AM