The Secret Life of Slugs 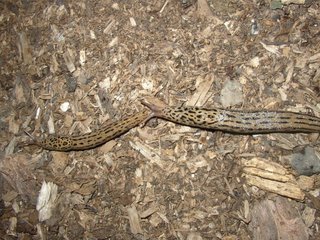 I was out watering a few plants tonight when I stumbled upon the tableau you see here. (I generally do not water, but I lost my mind a bit on Saturday and moved plants. Yes, in the middle of August. I know.)

These two were practically attached as they traversed the mulch in my garden--and yes, they're each about 4 inches long. We grow 'em big here, unfortunately.

As tends to happen lately, I dropped what I was doing and ran inside for the camera. Once pictures were downloaded, I hit Google and typed in "slug mating" on a hunch that a little slug lovin' might be what I was witnessing here.

I must have happened upon mere slug courtship, based on some of the fascinating pictures I found on the subject of "Aerial Slug Mating." Yes, really. They apparently like to hang from a rope of slime to mate--perhaps the slug version of the mile high club? If you're squeamish, the pictures on the link above might gross you out a little... but if you have a rather childlike curiousity about the natural world the pictures are absolutely fascinating.
Posted by Unknown at 10:29 PM

I know you warned us, but I had to click the link. That was phenomenally gross! I'm bookmarking the page because I recently started a diet and any time that I need to lose my appetite, I'm going to look at it again. Those pictures could be the key to permanent weight loss.

*shivers* I don't much like slugs..
but saying that, I do own an earing made of wood, carved to look exactly like a slug, which I love to wear.
I tried drying some cephalaphora flowers, and they did dry nicely! They did loose a bit of color, but look cute. Little bumpy balls on skinny stems. I should take a shot of them, and post it in my blog later today, so you can see.

LOL Claire--great idea! I may have to print them out and post them on my fridge!

Salix, thank you for the report! I usually check out your blog anyway, and will definitely make a note to look for the dried cephalaphora pics later. :)

Whoaaaaah, that is some intense Cirque du Soleil lovemaking! What a trip, those leopard slugs! In southern California, we only have (or I've onlt seen) smallish slugs, and those escaped escargot snails.

Whoaaaaah, that is some intense Cirque du Soleil lovemaking! What a trip, those leopard slugs! In southern California, we only have (or I've onlt seen) smallish slugs, and those escaped escargot snails.

Who knew about the secret life of slugs? I'm happy to report no 4" long slugs in my gardens (at least not that I've seen!) Gross picture, I clicked right on by your warning!

Cirque du Soleil is right! I went back out into the garden later to see if I could find them hanging from my Japanese maple (the only thing tall enough on that side of the yard) but had no luck.
Either the mood was gone, or the neighbor's house provided a more romantic location... lol.

We saw this for real in Seattle last summer - couldn't believe it! They were on the front wall of my daughter's house near the door, very educational!

I fall into the "childlike curiosity about the natural world'
" category so have pressed the button to peek. No wonder slugs are covered with slime. Grotesque but amazing information. I'll never look at a slug in the same way, not that I wanted to look at slugs in the first place...p.s. how'd the amaranth dry?

There's something so...romantic about all that entwining, isn't there?

That has to be one of the more bizzare gardening related things I have ever seen. Thank god I looked after dinner. *blech*

Thanks for sharing, though. :)

Slugs may be one of the more gross examples of "animal husbandry", but I used to live with a boyfriend on his Quarter horse farm, and helped him breed his stud to some mares...talk about "getting in the mood"...oh boy....

Those leopard slugs are beneficials - they eat other slugs, so be happy they are making whoopie . . .
I have some poems about slugs, here is a little selection that you can read on-line:
http://groups.yahoo.com/group/harvests_thoughts/message/109