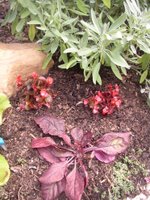 Last weekend, I moved a few of this year's container perennials, like the salvia lyrata 'Purple Knockout' at left, into more permanent homes. As I was planting, I had to rip out some tired nasturtiums, cut back some ratty calendula, divide some golden oregano, and move a few other plants to accommodate the newcomers.

The net result of all of this action was that I would end up having some pretty bare spots around my small perennials for the rest of the fall... but it's getting close to the end of the season and the plants need to have time to settle in, so I resigned myself to ignoring the bare spots for a month or two. 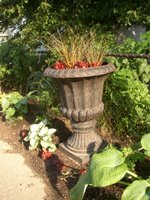 Also included in my plans for that day was dismantling a large urn from the side garden. It contained 3 carex buchannii (brown sedge) that needed to be planted out, as well as about a dozen 'Vodka' wax begonias that I'd added in when they went on sale during the summer.

The begonias never did get very big, and I learned from Janet, a fellow blogger, that the reason for my begonia failure was likely my tendency to overwater them. (I will not make the same mistake next year!) I realized that my container was going to look rather plundered without the carex, so the plan was to unplant it entirely.

I had a little line of dug-up begonias sitting on the cement in short order, and I couldn't help thinking what a shame it would be not to see their lovely red leaves as longas possible. It took a while for things to compute--I didn't have coffee that morning--but I finally had the eureka moment: 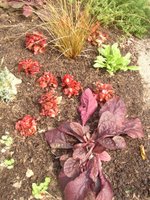 I was just going to toss the begonias anyway, so I really wouldn't lose anything but a few minutes by planting them around the lyreleaf sages and next to the carex buchannii.

I was so happy with the effect that I took a couple of the 'Vodka' begonias that had been planted in the driveway bed and moved them between the other salvia lyrata and the silvery culinary sage. 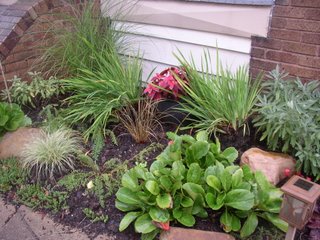 Then I plopped a couple of clumps of dwarf Siberian iris into the front bed--those will have to be moved sooner rather than later, or actually planted--and went searching for a little color to add in between them. A grey pot filled with red coleus, dragonwing begonia, yellow creeping jenny, and tuberous begonia fit the bill perfectly. I love how it sets off the brown sedge in front of it.

This front bed will look completely different next year. I'll talk more about my plans for it later, as that seems to be a good subject for a winter dreaming post... but I'm very happy that a little late-season annual shuffling means that I can keep enjoying it for this season as well!
Posted by Unknown at 6:21 PM

Your front boarder looks very good. I like this autum collection we can buy in the moment!

How lovely serendipity is! I have those blank spots right now too and have decided to accept them. Panic can ensue when they first appear, at least to me, anyway...as you say, it is getting near the end of the season and plants do continue to settle in. What a beautiful urn! I haven't focused on begonias, interesting to learn from you.

love the front border.lots of textures and colours to admire.Cant wait to hear your garden dreams...

Sigrun and Snappy, thank you both for the compliments. :)

Lisa, I laughed when I read your comment... because I just finished reading your blog where you said that you're not ready to use "the F-word" yet to describe the season! *grin*

You are so right when you describe the panic, Judith. I am going to have to plant those iris soon and might have to fill in with some type of seasonal decor or another, because the thought of that very visible front bed looking bare again really makes me feel the panic coming back!

It looks like late summer/early fall is remodelling season for more than one of us! Fun to see what you're doing.