To Pinch or Not to Pinch? 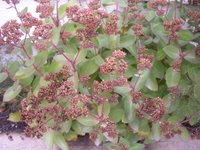 This year, I decided to do a little expirement with my 'Matrona' sedum. I don't particularly like the bloom on them--I fail to work pink into my garden very well--but I love the foliage.

I wondered if delaying bloom until a time when little else was flowering in the garden would make me like them more. Since I have two of them, I decided to let one grow without intervention and pinch back the other continually through the spring and early summer. The first picture shows the unpinched sedum, which is now beyond its disgustingly cheerful pink stage and into the dark pinky-brown shades that I much prefer. 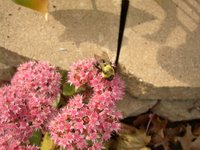 The second picture was also taken last week and shows the 'Matrona' that I pinched through early August. It's blooming right now, and I am happy to have something else blooming in the yard for the last of the bees to enjoy... so I guess that my experiment was a success in that regard. Instead of turning up my nose at the sedum, I smile as I check it for bees. 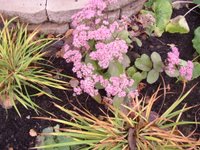 The last picture shows why, bees or no, I will not be pinching my sedums quite so far into the summer this year... unless I move them. Their pink looks a little insipid against the fall colors of yellowing iris foliage. I was planning to keep this sedum here, but if I suppress its bloom until later in the season I risk having to look at a pink and yellow clash made all the worse by the rich fall colors around them. Yikes!

Maybe siting it nearer to a dark purple, burgundy or red foliage may suit the sedum's autumn show a little better. Near the oakleaf hydrangea? Closer to the doublefile viburnum? At this point in the season, I have several months to decide where its next "new home" will be... and that's good, because I tend to change my mind several times before giving anything a permanent home.
Posted by Unknown at 9:00 PM

What about pairing it with an 'Obsidian' heuchera? I don't know, the effect might be too pretty, with the dark purple rounded leaves setting off the pink. But part of the problem I see with the iris there is that the leaves are thin and spiky. The colour and texture contrast is just too jarring. That's why I'm thinking heuchera. A 'Palace Purple' might work, too. It's more of a bronzey colour, but the leaves are a bit pointier, so it might cut down on the prettiness factor.

Wherever you decide to move it, this was a really good idea! I'd kill to have something, anything, blooming right now!

I agree with Karen...pink and purple would be cool...you could maybe even have a gold or light green grass nearby for more texture and contrasts!

Good point, Karen. The color is so jarring that I didn't even pay much attention to the forms and the way that they interact. That sedum is smaller than the other one--it was a chunk that I sliced off of the (m)other plant last fall. Still, echoing forms instead of doing my usual contrasting might mitigate the effect of "pink" further... hmm. Thank you for pointing that out.

Colleen, grow calendulas next year! I whacked them all back hard in August and am still getting rebloom now. And they're cheap and easy to grow, which I love. :)

Lisa, I happen to have some unnamed purple heucheras in the front yard, next to some light-green 'Frosted Curls" carex and a couple of pennisetums as well... hmm...

By the way, I would like to point out that this is really one of the things that I appreciate most about having a blog. I can show pictures, explain my thought process, get feedback from wonderful gardeners whose gardens and thoughts I appreciate...

I've never grown calendulas! I'll definitely have to try that. Thanks!