During the summer of 2005, I worked part-time at a local garden center. One of my first tasks in the spring was to go through last year's shrubs and trees to determine which ones would be sellable and which ones were not. I waded through the pots of shrubs, arranging the salvageable ones in a small circle, pitching the dead ones directly in the dumpster, and setting a handful of questionable plants aside for further review.

As the manager looked through the "maybes," he nixed a small mountain laurel, 'Olympic Fire' kalmia latifolia, that I had almost placed in the save area from the beginning. Sure its leaves were a bit desiccated by the winter winds, but the couple of branches I had lightly scratched with my thumbnail showed living green tissue underneath the thin bark.

I tried to bite my tongue--after all, this was only my first or second day of work--but I couldn't hold back for very long. "Um... you know that mountain laurel you said to pitch? There's a lot of green under the bark. If you don't mind, I would like to try and save it. We could put it back behind the fence there so customers don't see it until it's rehabbed..."

The manager, who I would come to know was a really great guy, looked at me, and then at the mountain laurel, and then back at me. "Well, we could do that," he said slowly, "but I think that it might get more TLC at your house. So if you want it, why don't you just take it home and see what you can do with it?" 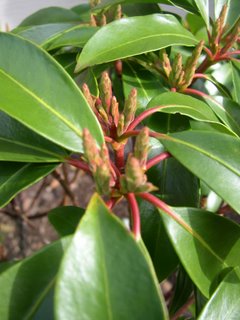 And so the mountain laurel came to live at my house last spring. It didn't do much during the summer--didn't look a whole lot better than it did when I planted it, but didn't look any worse, either. I gave it the occasional deep watering to help it establish a good root system, and pruned off a couple of dead branches in the late winter.

This year, it didn't put on any noticeable growth but I did get two clusters of flowers. I pinched one cluster back immediately, but let the other cluster bloom for a couple of days before I punched that off as well. I watered it deeply once, during a midspring drought, but otherwise left it alone.

With all of the bed construction and plant moving that I have been doing this summer and fall, I mostly forgot about the mountain laurel until I was planting bulbs last week. As I took photographs to chronicle where the bulbs were planted, I noticed buds at the end of each and every branch of my mountain laurel and took a picture of them as well .

Will the buds sprout new leaves in the spring? Will they be clusters of flowers? I haven't had the plant long enough to know, but I am heartened by seeing these signs of new growth in the fall. As the temperatures drop, it's very nice to have a promise of interesting things to come.
Posted by Unknown at 12:17 PM

I read somewhere that all perennials will "sleep the first year, creep the second, and leap the third year"...so I bet you've got a really good thing going! I personally have a couple bushes (forsythia and azealia) that tend to suffer thru winter, and I plan to put white "bush jackets" over them. It's mesh stuff with a drawstring you can tighten around the bottom...better than the cardboard "rose huts" for up here, because the huts seem to make a nice home for voles, who proceed to deccimate the plants. We'll see how it goes...

It sounds like you did everything right, including approaching your boss diplomatically.

Lisa, I'm just too lazy for all of that... yes, I'm hanging my head in shame here. "Survival of the Fittest" seems to be my garden motto--I'm rather heartless. *grin*

Kathy, thanks. I was actually just feeling bad about tossing it out and wanted to save it to sell at the garden center--I wasn't asking to take it home. They had a "rehab" area for plants that were being nursed behind the fence, and I figured that I could probably get it sellable by summertime.

As it was, he was probably right that I couldn't... it really didn't look any better through the growing season!

Lovely mountain Laurel.I think you have done well to save it.Im always looking for plants to TLC.I hope it flowers prodigiously for you!

Wow, that's going to look fantastic when it really gets going and starts flowering for you. (I have no doubt that will happen.)

And I think we have the same garden motto. ;-)

Sounds like you are having some good luck. Mountain laurels like acidic soils, so depending on the soil in your garden, you might consider adding something like sulfur to the soil to lower the pH a bit. That might give it a nice boost.

Well thats just great isn't it, I'm sure plants can tell when you care about them. I bet loads of stuff gets tossed at garden centres that people who cared could get to thrive.

snappy, thank you! Hopefully my mountain laurel and your from-cutting hydrangea will both flourish. :)

Thanks, Karen! I'm glad to see that I'm not the only one following the survival of the fittest motto... lol.

ukbob, I am sure that lots of stuff does get tossed. I was lucky that I stumbled upon that one, as I know that our "big box" stores and other garden centers do not allow people to take stuff like that home to nurse. I understand having to run the place like a business, but it still kind of pains me to see.

Isn't that exciting? I'm forever amazed at the urge to live in all beings, plant-beings as well! I have a terrible time throwing anything out, even onto the compost pile where I can reason that it will be reincarnated.