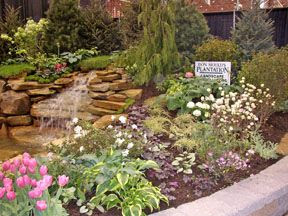 Water and stone seemed to be the common thread that wove together this year's display gardens... along with a distressing amount of reliance on the same color palette. I know that when you think of Ireland, fields of heaths and heathers in swaths of dusty pinks and purples may come to mind. But I simply cannot believe that those colors plus maybe a few white or soft yellow highlights are the only flower colors available in Ireland.

There was the odd glimpse of red: red tulips, an azalea that was blooming a little more crimson than cerise, etc. But the only garden that strayed from the general script was a charming little bright yellow cottage planted with an exhuberant mix of red-flowered begonias, dusky purple phormiums, elephant ears, and blue-flowered hydrangeas. Although it wasn't something I would normally like, seeing it was a visual relief! 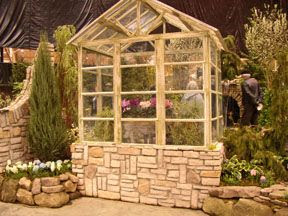 But I digress. There were a number of interesting features within the gardens themselves. I loved this little pseudo greenhouse. I couldn't help but wonder whether I could incorporate something like this in my backyard, using some of my trashpicked windows. 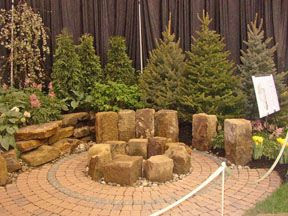 Another take on the tradition of druidic standing stones... but this one is more like a campfire 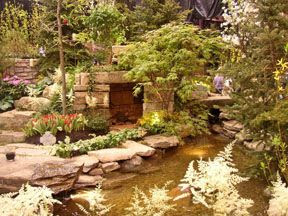 This garden had an interesting little hidden cave by the side of a "stream"... it's hard to see inside, but there was a campfire set up inside. The case of Guiness bottles on the top of the cave was a little bit too much of pseudo-clever joke, though. 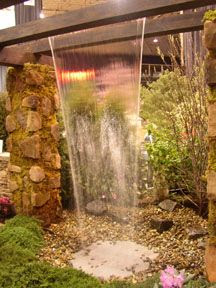 This sheet of falling water came out of a pipe hidden in the last beam of an arbor. The supporting columns were sheathed in rocks and fake moss.

This little nook was my favorite water feature, I think. Water gurgled softly through the opening of the millstone. I appreciate how the stone bench seat echoes the curve: 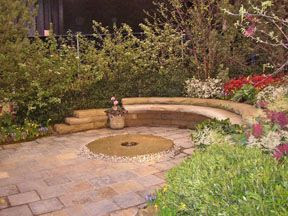 I still have to share the pictures of my favorite display--and the idea I'm going to steal for incorporating metal in my garden this year. But I have made a resolution to shorten up my long-winded posts a little... so this is enough for now. (See, Hank? It wasn't all "smokey watery gateways to hell"... although I'm still grinning over that comment!)
Posted by Unknown at 8:33 PM

Hey, I liked that misty [not smokey] watery gate to the land where Spinal Tap used to play.

Do the stone blocks remind anyone of Jens Jensen's council rings? So they'd be fake Native American instead of fake Irish?

The millstone is classier, but I'd like the sheet of falling water.

I loved that little greenhouse idea! I bet you could figure out how to do it with "found" windows. Hmmm...I'll have to start watching trash day a little closer around here :-)

These last couple of posts are giving me a boost of much-needed late winter cheer, btw. And I agree with you on the color palette...I'm sure plants bloom in colors other than pink and lavender in Ireland :-)

WOW! Way nicer than the NJ show. Thanks for sharing.

I'm with you all about the last water feature... the gurling millstone of water and the curved bench are MUCH more my speed. Not nearly so natural though... but I don't care. I live in suburbia now. Nothing is natural anymore... but... whatever.

That sheet of water provoked an instant and "pointed" reaction. Strange. I glimpsed the photo and thought: I REALLY want that. But then I thought about it. I think context is particularly important on something like that, else it might not work so well. I think I'll have to ponder that one. I'm with Annie.

By the way, THANK YOU for putting up these posts. Very nice.

That millstone is really cool, but have you ever priced them? The prices on this link
http://www.millstones.com/
are pretty standard, so if you've got 5 g's or so, you too can own one! Maybe somebody does reproductions out of concrete...hmm...

My word, that is too funny - the main door prize in the Vancouver Home & Garden show is a trip to Ireland - and there's a beer tasting session. Hmmm... international collaboration??? I wonder.

To read the comments of a passionate gardener are very interesting to me. I am also fascinated by the pictures you took and the angle you took them from.

Also the comments from your readers.

As you probably are aware the big Landscapers who build these intricate, elaborate, and expensive displays are not interested in providing you with "ideas". They are looking for work.

The hope of these contractors is to excite those Americans who have no wish to pick up a shovel or push a wheelbarrow but to retain said landscaper to install a dream, a vision, or a great space.

That's why I am interested to see what you are going to take from the show and use.

I am so glad I am never again going to do one of those shows. It was really tough to get through, to work your way through hundreds of "dumb" questions to find those few to contract to, otherwise no contractors would build displays. Anyway it's past history.

It's a good read, thanks for sharing, and posting what caught your eye.

I liked the idea of the hidden cave, for some reason. I like finding someting unexpected around a corner in the garden.

I understand what Rick is saying. I'm sure it costs a lot to put together these displays, and the contractors who do, want to get some customers from doing it. Since I'm not ever likely to hire a landscaper for a big job (unless I win the lottery), maybe that's why I'm never all that excited about what they do, since it is out of my reach. I just enjoy the flowers. Our "flower & patio" show is in early March.

I don't think you're long-winded, more like just right winded! Your writing is interesting and entertaining. I will look forward to the next installment!

I, too, think your pictures are especially good. Thanks for a most pleasant visit!

Rick... you and this "layman" thing... you are pushing buttons.

I agree. I think I'm learning as much from everyone's reactions and opinions. Posts like this one are a garden "rorchach test" of sorts.

I can't imagine working one of these consumer shows. I have a hard enough time dealing with people in my office... nevermind THOUSANDS.

Hi Kim, glad to see you've come out of hibernation. I enjoyed looking around the show with you. I'm not really much of a planner or theme person, if I think of something or see something I tend to bung it in somewhere and if I like it thats all that matters. So if I'd had a garden at the show you would probably have looked at it and thought OMG whats that! I reckon for sure you would have seen plenty of colour in it though.

As for the Guinness maybe the idea was to empty the bottles then you can see the funny side of it.

I hope you are going to show us more of your garden soon. Bob.

You are NOT too long-winded, Study!

* Waiting on the edge of my seat for the next batch of photos and the (finally!) metal-garden-incorporation idea *

I love the millstone. And I totally love the little greenhouse. I was at a garden show last year and there was a greenhouse and attached chicken house completely made out of salvaged materials and was just so adorable shabby chic. I have a stack of windows about thigh high and an old french door waiting in the wings. You can bet my eyes are scanning the curbside every clean up day.

Annie, I'll have to go look up Jens Jensen's council rings... haven't heard of those before. I do admit to liking the watery gateway to hell in my previous post, though. *grin*

Hank, I wish that I had taken a picture that better showed the context. The lighting is tricky at best in that building, and trying to stand at one end of the long arbor and take a picture of the falling water sheet at the end... well, it defeated me. I'll go back and see if I might have gotten something in another shot by accident, though. It looked good in context.

Lisa, I bet you could find a reproduction in cement--or make one out of hypertufa--now that you say that! I actually have access to a millstone, though. My grandfather used to work at a cement place, and he stacked I think 5 cement rings (from drainage projects) on top of each other, then topped it off with an old millstone that came from god knows where to use as a table in their backyard. Dad says that it's crumbling and needs to be taken apart anyway...

heavy petal, probably more like a huge push from the tourism board in Ireland! :)

Rick, your comment is absolutely fascinating... can I prod you into putting up a more detailed "behind the scenes" post of your own about what it's like to create a display and work at one of these shows? (I think all DIY gardeners know instinctively that these shows aren't really aimed at us, but you never know where you'll get ideas. And some of the work really was beautiful.)

Carol, I liked the idea of the hidden cave, too. Especially since I didn't notice it immediately, and it was located right by the side of the stream bed.

gotta garden, thanks for the compliments! I'm afraid that concise writing is not my strong point, though. And I'm okay with that, mostly. *grin*

(Hank, what does this personality test reveal about me?!?!)

UKBob, I got a grin out of your Guinness comment! Now that you mention it, I keep seeing pictures on your blog of the garden where you work... do you have any older pictures of gardens that you created yourself?

Christine, thanks... I'm getting to the metal, I swear! lol.

meresy_g... and old French door? I'm kind of drooling over here at that one! Now that you mention it, I have a knee-high stack of larger single pane windows of my own. I was going to make a cold frame or ten out of them, but I could incorporate them within a wooden framework to create a little greenhouse of sorts instead. Hmm...

I have been gardening since I was 15 so I will have some old garden pics somewhere. I will have to sort through the store room one day and find some out for you, I will let you know when I post something from my past. Bob.

Hello,
just found your blog.
Enjoy the pictures of the Cleveland garden show, great ideas.
I have posted quite a lot of pictures from our 2007 Canada Blooms garden show on my blog, perhaps you like to take a look.
cheers..

Wow!! nice garden you can also make your garden as like this by shopping garden decor items at CouponAlbum. Here you will get so many discounts and best offers on every purchase. It is my favorite site also. Come and enjoy it!!!!