Visit to the CBG II: Theme Gardens and Lessons Learned

The "Theme Gardens" at the Cleveland Botanical Garden are those built for the most recent Flower Show. This year's theme was "Rhythm & Hues," with each garden designer taking a very different approach. There were structures where water cascaded off of the roof and onto drums below and whimsical fountains where water poured out of the mouths of musical instruments. 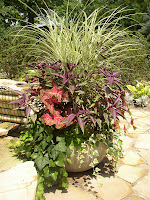 At this time of the summer, most of the theme garden plantings are not flashy. It is now when the interest provided by leaf color and texture, along with hardscaping, makes a huge difference. What struck me most as I explored this area were the ideas that I could take and apply to my own garden. These theme gardens reminded me more of a "real person's" backyard garden--albeit a very beautiful, well-design one. I could imagine this gorgeous container anchoring the corner of my garage... unfortunately, it wouldn't have fit into my car!

One garden featured a seculed patio with a water feature in which water spilled down a concave wall. A semicircle of stone in front of the feature seemed to complete the circle visually, and the whole patio was refreshingly cool thanks to a combination of mist and leafy cover. 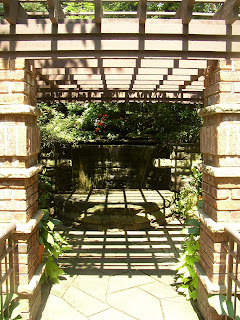 I took this picture of the entrance to the patio, but it wasn't until I went home and studied it that I realized why I appreciated it so much. I love the repetition of rectangular patterns in this patio entrance. In the midst of the more organic forms that populate the botanical garden--and in contrast to the circular water feature inside--these straight lines added an orderliness that was somehow very relaxing and comforting.

Using tall timbers as the lowest level of overhead beams in the arbor here was fantastic. It allows the squares revealed by the sunlight on the floor to be repeated on the "ceiling" as well. In effect, it looks like perspective lines have been drawn to pull your eye toward the water feature inside. The bricked columns on either side continue the rectangular theme but add a nice vertical and a sense of arrival as well. 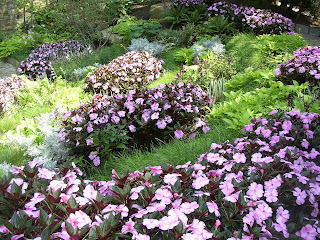 The "Opera Hortensia" was definitely one of the more colorful theme gardens. Two curving walls of arches bookended the garden, with an open area near the lower wall that evoked a stage. A patchwork of plants swept across the curving slope, giving the feeling that each plant grouping was a separate party of viewers settled in to enjoy an evening concert. The seemingly random clumps lent a nice rhythmic feel to the planting. The planting wasn't overly dramatic... from above, it just felt nice in a quiet kind of way. You can see what I mean in the first picture. 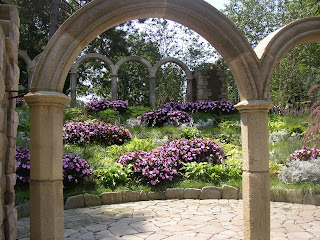 Now check out the framed view in the second picture. Okay, so the "frames" are gorgeous cement (stone?) arches, but don't let that distract you--I really think that they would be just as beautiful if they were plain wood. The arches do not support any climbing vines or hanging baskets, as their purpose is to focus your attention and provide context. Framing the plantings in this way makes them seem much more important than they would be without the arches. Now I keep thinking about views that I might want to highlight via framing in my own garden... 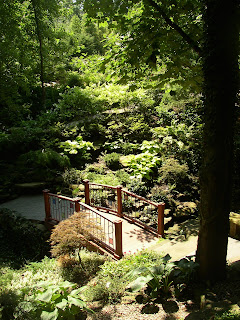 The last theme garden that I want to highlight was this sunken woodland gem, designed by The Pattie Group. The pathway meanders down the hillside through the wild-seeming plantings. Large-leaf hostas and ligularias contrast with other fine-textured plants and random rock outcroppings.

Sunlight snakes through this garden via a break between stands of tall trees. I might have just been here at exactly the right time of the day and year, but you can see that the sunlight patterns are highlighting the subtle river of yellow-leaf plants (including large hostas) that they planted to "flow" down the hill in an accidental-looking way. I can't believe it's accidental, though, and it got me to thinking about how I could better take advantage of the patterns of light in my yard. 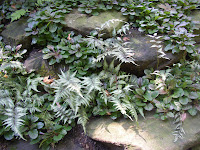 As I sat on a rather conveniently placed large stone in a small landing area, I lamented the fact that I have a level yard. There were so many beautifully used changes in level here. But I did take some inspiration from the ajuga and ferns planted within a collection of rocks behind the natural bench. You don't need large levels to tuck some of these smaller plants into groupings of rock and dirt artfully--I think that I could arrange this on a smaller scale at the back of my lot, beneath the grape arbor.

As we left the cooling refreshment of this last theme garden, Amy and I felt a little bit tired... there had been so much to take in. Luckily the Hershey Children's Garden awaited around the bend, full of excitement and a return to the energy and enthusiasm of childhood. Stay tuned for a tour of that garden, which will probably be posted later this weekend.
Posted by Unknown at 5:39 PM

I love ajua, and it looks great with the fern. I had ajuga at a previous house and had forgotten how much I like it. I'm going to make a note to look for a place that needs some ground cover. Thanks for the tour.

The Opera Hortensia garden is stunning in use of color, framing, and treatment of a slope. It does look like an ampitheater. I also appreciated the rectangular trellis you photographed. Very nice.

How right you are that hardscaping is crucial to framing the beautiful plants in a garden. Thanks for the tour!

I don't remember the Opera Hortensia looking that stunning when we were there! Or maybe it's your photography! Undoubtedly, it's probably grown quite a bit since May though. Gorgeous!

And I don't remember the pergola/fountain thing. I'm losing my mind, I swear. I'll have to go back and look at my photos.

Looks like you didn't miss a whole lot by going later! Vendors, sure, but it looks like they kept all the best new features. I'm glad you got to see them, even if you didn't get to see me. LOLOLOL.

I didn't realize that I needed to travel to Cleveland until just now! I love botanical gardens, how nice you have such a lovely one in your area.

You can always create changes in levels even in a level yard by making piles of rocks and putting dirt around them. . . You should see my "hills" here in my level yard.

Oh, we are so blessed! it is raining RIGHT NOW!!! Well, maybe nto so blessed, there was a ground strike right behind my barn right then. I think I'll get off the computer now before I get electrocuted.

I remember being awed by this botanical garden a few years ago and it looks wonderful in your pictures! Their children's garden was just the best and I was wishing our botanical garden had something to equal it, but that might be hard to accomplish. Wonderful photos!

Kim: I can't wait to see how you 'frame a view' in your own garden! It certainly does make an impact doesn't it? Love all the photographs. I find the New Guinea impatiens planted between the grass a bit curious, appealing, but curious. Thanks!

Cleveland ROCKS! I have been on a structure-incorporating kick this year, so I really appreciate your fantastic photos.

Your garden is soooo eye-catching. I just love lookin' at its pics.
;-)

Thanks for the little tour of the botanical garden.

Nice tour! I'm also looking forward to seeing how these ideas translate in your garden. I just saw a commercial for the Green Bay Botanical Garden the other day, I think I need to go check it out! (I've only lived up here for 9 years and never been :(