I have big plans for this Labor Day--big garden plans, that is. The remaining mulch pile needs to be spread around the plants that never got it when they should have in the late spring, for one thing. And the little girls next door, who are adorable but who impede my "me time" in the garden like you wouldn't believe, just got into the truck with their Mom and drove away with many bags of food and picnic items tucked around them... so I hope that means they plan a long day of fun away from the house. 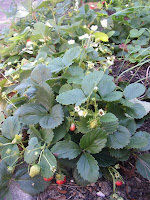 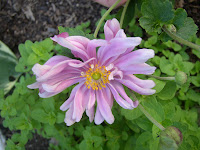 Taking a preliminary walk around the garden this morning, I found a few things to be content about. Not only are my 'Ozark' strawberries continuing to provide sweet red berries, but they are covered with flowers that promise an extended harvest. Even better, the gifted 'Party Dress' Japanese anemone has decided to open its first bloom! The flowers are amazingly beautiful, and now that I know they are prone to flopping, I will be better prepared to give them a little lift next year. 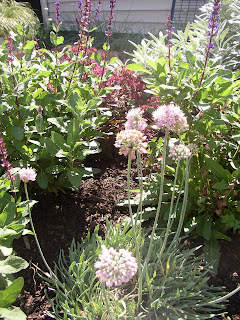 It seems that I finally found the right place for my small ornamental onion, allium senescens glaucum. Its previous companions either dwarfed it entirely or simply did nothing to show off its fun, twisty foliage.

I moved it to what I think of as the "dry garden," where (except for an amended area where an espalier apple grows) the soil is sandy and barren. It's really nice combined there with 'Caradonna' salvia, 'Arthur Branch' sedum, 'Newe Ya'ar' culinary sage, 'Vodoo' sedum, and various flat, rusty-colored fieldstones. They form a little textural tapestry that you have to look over when you reach the end of the garden path, in order to view the Japanese rock garden.

(And I can't say enough about that 'Caradonna' salvia, by the way. I gave away my last 'May Night' in order to make room for more 'Caradonnas' because their flower stems are a dark purple color that deepen the blue flowers. It gives them so much more presence IMHO.) 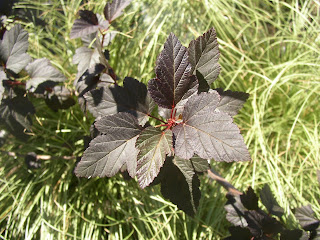 The 'Diablo' purple ninebark seems to be adjusting to its new home without a peep of complaint. I picked up three 'Frosted Curls' carex grasses in the annuals clearance section of our local garden center, and placed the pots underneath the ninebark branches to see if I would like this combo as much as I thought I would. (I do!)

This carex was listed as hardy to zone 7 on the tag, but I successfully overwintered three of them last year after buying them from another source where they were listed as hardy to zone 6. We did have good groundcover in the form of lots of snow this winter, though, so I'm going to hedge my bets and mulch over them in December.

My other big job for the day will be to plant the variegated iris and lamium that I "stole" yesterday from my grandma's and mom's house, respectively. I say "stole" in quotation marks because they both have allowed me to take divisions of these plants before and I knew neither one would care if I did so again. But technically, I didn't ask before picking up the shovel... and I have a good reason for that, I promise.

The lamium seems to transplant with no problem, but grandma's variegated iris are the only ones that I can't get to take here. (Siberians, various tall bearded types... they all grow like crazy.) Since one garden superstition says that stolen plants tend to thrive--ostensibly to increase the guilt of the thief--I'm banking on that to happen for me in this case! Maybe that in combination with the "Third time's the charm" rule will mean that I get to enjoy a nice patch of variegated iris next year? I hope.
Posted by Unknown at 12:11 PM

Happy Labor Day, it sounds like you have a lot of labor planned! The Carex has proved hardy here (6 on the edge of 7). I like your Diablo combination but be prepared for some pruning. My Ninebarks got up to about 8 feet before I cut them off to 3 feet. They are sprouting again and I think I will try and hold them at 4 feet.

I haven't heard of that Saliva but am going to look into it.

digital flower pictures, thanks for the heads up on the hardiness of the carex. I hope that proves true for here, too.

Yes, the ninebark will have to be pruned back very hard. My aunt and uncle have one that they keep at about 4ft, and I think that they cut it back to the ground every spring in order to do so. It's apparently easy to keep them short this way, but on the flip side you don't get to enjoy the exfoliating bark as much since it looks more pronounced on older branches.

Aw, I am glad to finally get to see a photo of the 'Party Dress' Japanese anemone in her new habitat. She's quite pretty, and definitely ready for an elegant event :)

That's interesting that the variegated iris doesn't transplant as well...I have two and they have never been as vigorous as the other types of iris. Maybe someone should steal them from me!

My grandmother always said that stolen plants grew the best!

Ah, your A. 'Party Dress' beat mine. Ours has yet to bloom though I'm hoping it will do so in a week or two. Great to see what it will look like. I was a little dismayed that the stems are weak and one of them has already fallen over without the flower opening. So I know what you mean about propping them up. Looks wonderful, almost like a pink 'Whirlwind'.

Swamp Girl: thanks for stopping by my Garden Wise Guy blog. You are absolutely permitted (no, encouraged) to use the term Plant Janitor anytime you wish. I'd love some help defining and proliferating this subspecies taxonomy, as too many people call themselves "gardeners" and defile the term for the rest of us.

Thanks for the fun read on today's blog!

I didn't know that stolen plants grew better! I had heard that you shouldn't say "thank you" for a passalong plant, but I'm not sure why. Wait until my sisters find out about stealing plants. We'll never be able to trust each other again when we visit each others' gardens.

Yeah, the tradition of not saying thank you is widespread - but your readers now want a complete report on the truth of the stolen plant theory. Will it jinx anything if I wish you luck with the variegated iris, Kim?

The 'Ozark' strawberries are still producing fruit? Maybe it's time for us to think about growing everbearing strawberries again. They never made enough fruit at one time to make preserves or a family-size shortcake, but we don't need those quantities now. I'd be happy with a dozen fresh-picked strawberries on a bowl of cereal.

Did someone say something about spreading mulch? :)

Well I hope you accomplished your Labor Day goal of finishing off your mulch pile. That's always a great feeling to get those last few shovels.

Your remarks about the little girls made me laugh. I can't get rid of my little girls who provide garden distractions, quite that easily. ;)

I am going to divide my variegated irises soon. Maybe a different source would work? I could always send you a couple of rhizomes.

"Stolen plants always thrive"...really? That's awesome, since I plan to steal a couple plants from work! I got permission for one but not the other, so I hope they'll both still grow well. Funny about the varig. iris...mine pretty much survive and that's all, too.