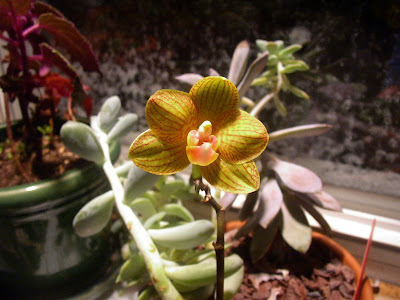 I suppose that my orchid thinks that showing its cheery, smiling face is going to make me forget that it opened a whole day late. This tardiness, in spite of my constant reminders for the past few weeks that it had to be open by the 15th for December's Bloom Day, makes me say: "Harumpf!"
(I already used "Bah Humbug!" yesterday.) 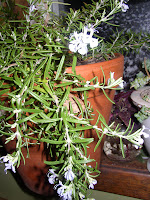 On the other hand, I just flat-out missed the blooms on this rosemary. It was behind another pot of rosemary on the kitchen counter, and since the branches all cascade down they were hidden from view. This may be the last year that I bring rosemary inside, by the way, as I learned that one of my garden center co-workers has successfully overwintered hers outside for the past 5 years. They are now shrubs--I will definitely have to try that!
The flowers on 'Huntington Carpet' are actually a very pretty light blue, but I had to use my flash because the picture kept turning out yellow without it. That's the one thing I hate this time of the year--I'm so busy at work, and the sun rises so late and sets so early, that I rarely get enough daylight at home.

But next month will be better.
Posted by Unknown at 7:53 PM

So true...just a few more days till the solstice when I always call my dad and rejoice...the days are getting longer! And how nice to catch the rosemary blooming...I love how GBBD makes us pay more attention!

That naughty orchid. It should cooperate next time. Possibly it will be blooming for you next month. I like seeing your blooms at any time.

That's right, next month will be better, Kim. Repeat after me. "A few more days and the days will be getting longer!" And your orchid will hold for ages.
Another gardener with blooms on their rosemary. As I confessed to Yolanda, I'd have blooms if I'd stop eating the rosemary! Well, the kitties try to prune it too....

Love the orchid, Kim. Mine should be in bloom again this week sometime.

I brought my rosemary in this winter and now it's really dropping leaves (needles, I say) for some reason. Maybe I should have just put it in our garage or something. I hope it lives until spring! It's fairly large and did wonderfully this summer, so I'd hate to lose it.

I've not seen the prostrate rosemary before!

Your orchid may have opened a little late, but it was certainly worth waiting for, I'd say. How cool that you may be able to overwinter rosemary outdoors. I brought two indoors and they promptly died; the one I left in my garden (mid-Zone 6) is ice-coated but still looks nice and green. Still, it has while to go until spring!

Don't be too har with your orchid, she did her best and she is so beautiful! :-)

A beautiful update on GBBD kim. That orchid looks great (and better late then never - wich is what usualy happens with orchids at my place)

Love the veining on that orchid!

I think rosemary is hardier than it gets credit for. I had 2 different varieties survive outdoors for many years, but lost one in a really cold winter. The other one is still going strong. I bought them so long ago I don't remember which varieties they are (if I ever knew), but 'Arp' is said to be one of the hardiest.

Have you seen Adaptation? Your pretty orchid made me think of it. It's about orchid hunters, kind of, sort of, not at all. I'm writing a review sometime tomorrow in spite of the fact that it's four years old. Anyway you'd like it I think.

Beautiful orchid and white Rosemary...we are sitting at a temperature of minus 12 degrees, so your post is a feast for the eyes :)

Kim, that orchid almost looks cheeky doesn't it? Something like a cheeky kitten.

When I stayed at Sooke Harbour House (on Vancouver Island, BC) last month, outside my room was a rosemary bush that was well over 8 feet tall and twice as wide. The gardener said they just finished pruning it!! I've seen them grow in others gardens but this was the largest and tallest I've ever seen. I have to buy new plants every year because living up north we definitely can't overwinter these mediterranean plants. Yours looks lovely with those delicate blue blossoms!

Orchids have a mind of their own, don't they? Mine never cooperate with me, either. But they should, because I'm the one who waters them!

The solstice is tomorrow morning... these dark days will be brightening up.

My rosemary has been growing outdoors for near 20 years, and cuttings have gone to Holland and Germany, where it also grows outside. This variety grows into a huge shrub, and doesn't mind the winter at all.

As far as I know, rosemary can be overwintered until up to minus 15 degrees, so I left mine outside the last winters because it always started blooming in the garage where I couldn't see it. Now I'm expecting the first blooms as soon as January (if there is no frost). Just in case there is really hard frost this winter, my Christmas tree is going to be cut up and used as protection against the cold easterly winds.

That's a lovely orchid you got. My phalaenopsis is of the rather boring pink kind. However, it seems to be happy that I forget about it most of the time: this year there are two stems with buds at the same time. I'll post a picture as soon as the first one opens.

Merry Christmas and remember: the days are getting longer again. :)

Leslie, so true. It also gives me something to look forward to each month--instead of just "anticipating" the new bloom of an orchid, there's the added drama of wondering whether it will come in time for bloom day.

Lisa at Greenbow, you really think it might? I know they're long bloomers but I wasn't sure how long... I'll have to keep up with that.

jodi, lol! Very true, you will not likely get blooms if you keep eating the rosemary. Unless you're like me and have FOUR pots of it inside. *grin*

Kylee, they do that sometimes. Is your house pretty warm? I try to keep mine relatively cool in the winter, so I have it near the vent for my stovetop. (And 'Irene' is another pretty creeping rosemary... but I've only seen that one for sale in catalogs. I can find cheap herb pots of the 'Huntington Carpet' locally most years.)

Nan Ondra, please let me know how yours does in your mid-zone 6 this year! It would be so great to be able to keep mine outside.

gintoino, very true. Maybe you should neglect your orchids a little more? I am only getting this bloom because I kept forgetting to cut off an old bloomstalk!

Entangled, it IS a pretty orchid. I am just tired these days, that's all. :) As for the rosemary, my friend Katie seems to think that she's had good luck because she plants it in the ground in the spring and it has plenty of time to settle in. We'll see. 'Arp' is definitely tasty, too, but 'Spice Island' is my favorite so far--I hope they are BOTH hardy for me.

Meagan, need you ask if I have seen a movie?! lol. No, of course not... maybe we should start having movie night instead of bookstore night now that it's winter and the bookstore is busier?

Wildlife Gardener, MINUS 12 degrees? Yikes! I hope you're measuring in celsius...

coldclimategardening, it appears to work. Yay!

Diane, now that you mention it, that orchid does look a little cheeky! She kind of has her head cocked to the side like she's laughing at me, no? "HA!"

Oh, to have to prune my rosemary like a hedgerow... :)

Carol, maybe that's why. They're just ungrateful, those orchids! ;) *grumbles*

chuck b, very true. I actually like the dark days of winter, I just hate that I don't get to spend any daylight time at my house when work is this busy and I'm working 7 days/week. Ah well.

Salix Tree, that's very interesting! Do you know what your climate would be the equivalent of in terms of our "zones?"

Corinna, that's great information--and a great idea to use the Christmas tree as protection. I'll have to "mentally file" that for next year.

I'm keeping it in the utility room, which is cooler than the rest of the house except when I'm doing laundry. I'll just have to see if it survives till spring. Not a big loss, but it is the nicest rosemary I've ever had.

Dear Kim, Happy Christmas to you!

Beautiful rosemary plant, Kim. I haul mine indoors each fall (on sun porch) then lug back out in spring, however, now too huge it rests frozen in the garage. Have never had luck wintering over outdoors. Do have a lovely holiday and if ever in the area, pop in for some crab cakes!

The orchid is lovely, if tardy! I have nothing, repeat NOTHING to post for bloom day, since I don't have any actual plants growing in the ground yet! None! Well, just the camellia, but it's done already. Sigh! Next year!
~Angela :-)

Merry Christmas Kim!!! You had more action on bloom day than me, but that's how it goes. Enjoy your hectic holiday...spring is coming! :)

We're nearer to Spring in December than we were in September. ;-)
Harumpf or no, that is a very pretty bloom. My rosemary was in flower too but outdoors instead of in.

Hey again, Kim! I hope you're happily busy having a great holiday and planning ahead for future flower-filled Bloom Days!