This is my first full weekend off after a long winter and long busy season at my job. I had such grand plans for Saturday: Get up early, clean the house in the morning while the sun warmed the earth after Friday's rain, and then get outside to do some more garden cleanup and enjoy the afternoon sunshine.

I barely remember turning my alarm off, and when I finally forced one eye open I was horrified to see that it was 10:55am. After taking the dog for a very short walk, and putting dinner in the crock pot, I was forced to rest. A few naps and a phone call to my parents later, I figured out that I must have the flu. No Spring Fling in Austin for me, but no gardening on Saturday either, in spite of it being a beautiful day. So I indulged in a little retail therapy, garden-style, to make myself feel better.

My friend Meagan is not quite a gardener (yet) but she'll be very happy to see the plants that I bought online yesterday. The spikey flowerheads and thistle-like foliage of echinops ritro* is going in "the mailman's walkway," and you might remember that Meagan very enthusiastically suggested a system of trip wires and booby traps when I first mentioned my mailman woes.

I suppose that the blue globe thistles are the gardener's softhearted alternative, but really I just like them. They are blue, kind of primitive-looking, drought-tolerant and tall so they'll fit the scheme and give some much-needed height to the front garden. 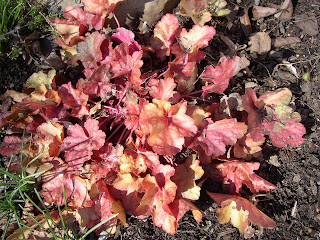 Meagan originally hails from the gardening mecca of the PNW (Eugene, Oregon) and has extolled the beauty of St. John's wort to me over the past few years. I refuse to buy the *ahem* overly enthusiastic groundcover version, and I missed out on buying the bushy 'Albury Purple' for cheap when the first garden center I worked at went out of business. But I have long planned to include 'Albury' in my front garden, and a golden-leaf variety, 'Golden Tusan,' hopped into my online shopping cart as well, in a moment of weakness. (Darn flu! lol.)

I'm not sure where I'll use 'Tusan' yet, maybe as a bright splash in a container. I'll have to spend some more time on Nan Ondra's blog, Hayefield House, for additional ideas. If you haven't yet checked out her 3-part 'Golden Shrubs' posts, or the 'Golden Foliage' perennials post, you're missing out on some beautiful ideas. 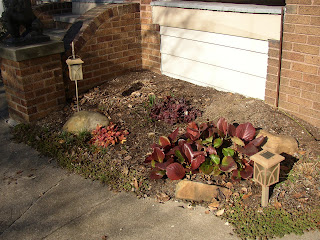 Today, I woke up without a fever (I think) but I continued my regimen: Drink 1 Gatorade, refill Gatorade bottle with water 3 times, repeat. Around noontime I felt good enough to go out in the backyard and poke around a bit. I raked out the small driveway bed, which took all of 30 minutes, and then had to come inside to take an hourlong nap.

Late in the afternoon, I went out front and cleaned up the front corner bed and then cut back the rest of the grasses in the front garden. There's still a lot of cleanup to do, and mulching, but I feel better that the bright colors of the bergenia, heuchera (including 'Peach Flambe,' which is also shown above in its near-psychadelic, PNW-worthy close-up) are now unobstructed by old yarrow foliage and such. 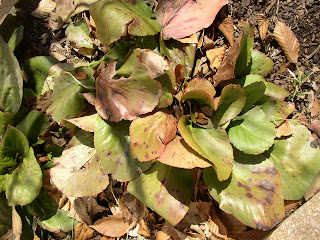 Speaking of bergenia, I promised Layanee, Cultivated and a few others that I would show my "bad" bergenia. So here it is, in all its glory!

This is the plain old bergenia cordifolia, and it has much rattier foliage in the spring and no fall color--hence it being banished to the backyard. I should probably shovel prune it, but in the summer it adds a nice thick-leaf texture underneath the cherry tree, and it doesn't mind being dry. And it's far back enough in the yard that I don't have to see it every day! 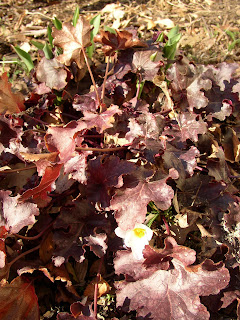 Because I hate to end a post with an ugly picture like that bergenia, I'll also show one of today's surprises. The chipmunks must not have gotten every single one of the crocus bulbs last spring after all, because one is peaking through this dark-leaf heuchera. (Behind it you see the foliage of more tulips that I don't remember planting. Argh.)

Hopefully this spring will bring more of the welcome surprises, like this little crocus, and less of the unwelcome ones, like travel plans gone awry and flu bugs coming to visit...


*Photo of echinops ritro courtesy of van swearingen, on Flickr
Posted by Unknown at 9:35 PM

Aw, feel better soon, girlie! I think you're doing the right thing to mix your malaise with cheer...may not help but it can't hurt! ;-) I got a little cleanup done this weekend too, but luckily the plants know what to do. They'll do it with or without us, too! :)

Oh Kim...how unfair is that? I hope you're feeling better and better and I'm glad you got to do at least a little gardening and retail therapy...and I hope you have time off next weekend too so you get a real gardening day!

Oh Kim, I hate to hear that you are feeling poorly. Poor baby. Nothing like a little shopping therapy to make one able to face the world.

I have tried berginia a couple of times without any luck. What is your secret to successful growing? I thought my soil was too dry, yet you said it likes dry. Maybe it just didn't get established before being dry. Hmmmmm

Thanks, Lisa! I know that they'll do it with or without us... but since the whole neighborhood things I'm nuts for not having an all-lawn front yard, I'd like to always have my best foot forward there. :)

Leslie, I might have overdone it with the second trip outside... but it will soon be bedtime for me, and hopefully a good 10 hours of sleep will help! No luck next weekend, though. Friday I have off, but the forecast says rain. Saturday is Brian's birthday and we're going to be out celebrating... and Sunday I start at the garden center already! Yikes!

Thanks, Lisa. I don't know if the shopping therapy helped, but being sick definitely took the guilt edge off there. *grin*

Do you have clay soil down there? Maybe the difference is clay vs. sandy soil--I know that bergenia is a staple in Beth Chatto's dry gravel garden in England, and that's apparently pretty well-draining. Hmm.

WooHOO! (To the thorns and St. Johns Wart... not being sick.) Hope you continue to feel better, tea helps.

Kim: My Friday could have been worse! I could have gotten the flu! So sorry and why was it so nice out? It is never raining when you're sick! Laughed at your bad bergenia. I looked at mine thinking I might see some flower buds but no, not yet. Glad you are feeling better and you had the ability to make me feel better also. What a pal!

Lol, Meagan! I knew you'd be happy both about thistle-y-ness and about the St. John's Wort. :)

Layanee, you're so right--it never is raining and crappy when you're sick, is it? I caught pneumonia when I was 12... in August! How unfair is that? lol.

Glad to see that my bad bergenia made you smile/laugh. Interestingly, I've had more flowers on the "bad" bergenia than on the "good" bergenia!

I'm looking at Bergenia cultivars in the catalogs right now, and trying to remember to pronounce it with a soft G. The Bluestone Perennials catalog says that B. cordifolia 'Winterglow' "does really well in many spots where other plants refuse to grow". That seems rather vague? BTW, the cultivar name is apparently Winterglut in German. I couldn't help thinking of the midwestern glut of winter this year.

I do hope that you are feeling better now - I'm a bit late at getting around, actually have been wandering around much at all. The flu is no fun in any season, much less when spring is around the corner (as your winter aconite seems to suggest!). Anyway, I hope you are feeling stronger, and you'll love that echinops - I have a clump in my garden, and it's really beautiful and remarkably reliable.

(I still wish I could try the bergenia - but there's not a chance in hell it would make it here, that is - if I remember it's zone restrictions properly.)

It looks like there was a silver lining to your missing Spring Fling... those flu-type things take a couple of days to incubate so odds are you'd have still been sick - but on an airplane or in a strange hotel room instead of your own cozy cottage.
Poor baby! There, there!

I hope you're feeling better by now, Kim! Flu is NOT fun.

And now you know why Bergenia is not one of my favorites. Mine looks very much like your bad one most of the time. I don't recall which one I have, but it's quite underwhelming.

Retail therapy - absolutely. My problem is that I need therapy even when I'm feeling just fine. I've really overdone it this spring and there's still more I want. Specific things. Like a witch hazel and the trick is to find a nice-sized one that doesn't cost an arm and a leg.