Did you ever notice that the best time to finish a relatively non-essential task is when you really should be doing something else? Specifically, something that has a much more urgent deadline? I have been putting off cleaning the house for reasons that I don't want to go into fully at the moment... but they may involve me being a fairly stubborn girl who feels that she receives an overall lack of assistance from a certain someone else who tends to get my house just as messy as I do.

So instead of cleaning the house--which I should have been doing all day since my brother and sister-in-law (the Apartment Dwellers, not the Overachievers) are coming to stay at my place tomorrow night--I decided it was time to go outside for a good long session of garden therapy. 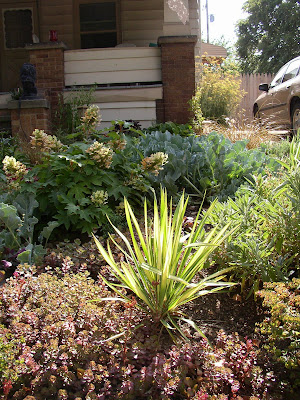 All of the gardens could use lots of work, but I started in the front yard, as you might have guessed from the picture above. My yard is on a bit of a slope, and I like the way the front garden looks from the sidewalk, particularly when the morning sun backlights the 'Golden Sword' yucca in the front corner.

The huge stand of bronze fennel absolutely glows in the morning light, too: 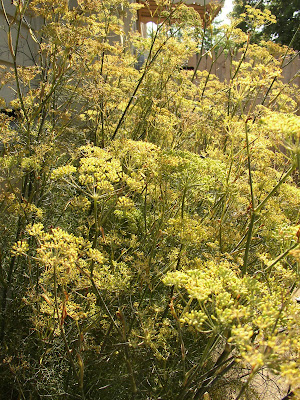 The bronze fennel amazes me. It somehow grows in a 1ft by 6ft strip of dirt between the porch and the driveway, without the benefit of water. The roof overhang prevents it from getting much more than a little mist of moisture when it rains, and the gardener is too stingy to water it when it looks this good without her help. I do cut it back occasionally, however, which I did shortly after taking its photo today. (No big loss in cutting it back hard. The butterflies have ignored it for the past few years anyway... *sigh*)

Another garden feature that I love to see in the morning light is my urn planting: 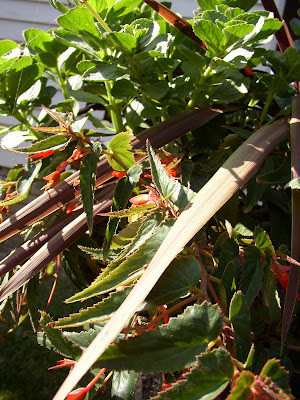 A lot of people--bloggers, magazines and media alike--have been talking about container recipes and plans this year. I would love to have an elegant, zen-like look to my container plantings, and that's always my original goal, but somehow I always end up with the "everything but the kitchen sink" planting scheme instead. I think my problem is that I just can't pass up fun textures, like these: 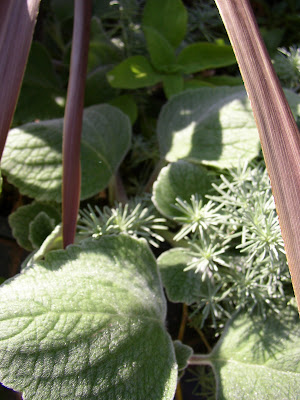 I want to pet this fuzzy-leaf plectranthus argenteus whenever I see it, but it looks really adorable mixing with the silver lotus vine under the blades of red cordyline. In the shadows at the back of this picture you can see part of the 'Golden Delicious' pineapple sage... I overwintered everything you see here except for the lotus vine, so it was a fairly cheap container to put together.

But more on that later. A couple of other things in the garden proper caught my eye today, including a new bloom: 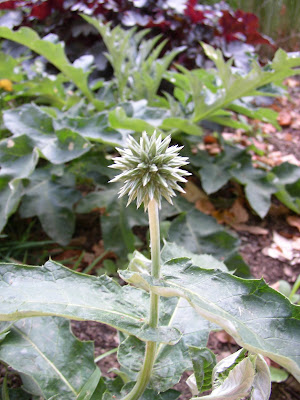 This is one of three echinops ritro, aka globe thistle, that I bought from Bluestone Perennials this spring. I didn't really expect any of them to bloom for me yet this year, as Bluestone plants are usually very healthy but very small, but I've been loving the foliage--it reminds me of cardoons. Seeing this little flower, which looks to me like the horticultural version of the mace, really made my day.

And then I had to take a picture to show just how nicely the golden marjoram, origanum vulgare 'Aureum,' mixes in with its neighbors: 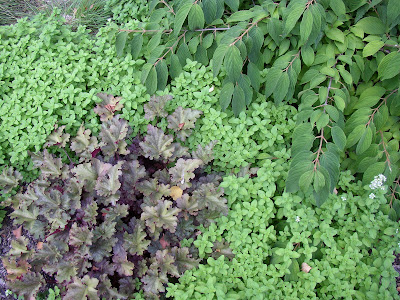 It's almost at its mingling limit with the purple heucheras, so I gave the heuchera (and a nearby purple sage, and some hellebores) some breathing room this afternoon by pulling and cutting enough clumps of oregano out from their perimeter. I just love using this as a groundcover, though, both where the dog tends to pounce on the garden and where it only has to look good.

Speaking of looking good, it's now past midnight so I can now officially freak myself out by saying that Craig and Jen are going to be arriving at my house later today. Yikes! Time to go clean the kitchen before heading to bed...
Posted by Unknown at 12:03 AM

Ah yes, I love it when the garden benefits from my procrastination, as it is usually the one that I am procrastinating about...

I love the oregano ground cover!

Have a great weekend.

I love all the color and texture in your garden Kim. I hope you feel better after your garden therapy and some blogging. Have fun with your company this weekend.

Katie, the procrastination worked out well for me in the front yard... but not so much in the backyard, where the stupid crabgrass wants to take over! :( And I love that oregano, too--it comes out bright yellow, then fades to this light green, and you can also cook with it.

Greenbow Lisa, thanks! I do feel better after some gardening and blogging... and starting to volunteer at the Cleveland Botanical Garden this morning. *grin* But more on that last point in another post...

I love all your foliage textures and color contrasts. You've done a beautiful job. Forget that Zen look and enjoy your more exuberant creations. :-)

Thanks, Pam! I do need to be better at celebrating my "strengths" rather than noticing my weaknesses. It's my darned inner perfectionist... *sigh*

Tell that certain someone that if he wants to sleep in your bed he needs to wash some sheets and vacuum every once in a while. That usually brings them round. I'm lucky that my husband loves to clean and is far less tolerant of filth than I am. When company's coming I take the view that we can always shut the door to the messy bedroom or leave a few lights off so they can't see the cobwebs on the ceiling. He's bleaching the screen door and dusting the bookshelves for a cook-out.

I love your front bed Kim! Doesn't look like any space for the mail carrier to try to walk through so maybe she'll get the message! I am definitely in the group that does unnecessary stuff and then have to panic..hope you have a nice visit!

Kim, I love all the foliage colors and textures. They're very sensual. I'm a firm believer rules are made to be broken. Your "everything but the kitchen sink" planting scheme is very appealing.

I break all the rules with containers too. What happens is that 4-5 plants go in, fight it out, and 3 emerge triumphant.

You've got very nice colours and textures in your garden! I think the oregano looks great next to the purple heuchera..maybe i should try that out myself.
/Katarina

Your bronze fennel is gorgeous! I have only one plant of it at the moment, from a mixed wildflower seed packet. It's not quite blooming yet. Your photo inspires me to let it go to seed, so I'll have more next year!

This post was a fun read...I find myself wanting to comment maybe too much! When I have company I clean the public spaces; if they're spending the night they get a clean room and bath and the public spaces get cleaned! I do like the oregano and think it looks very good with the heuchera. Have you seen the variegated oregano? Lovely! I plant parsley for the caterpillars and butterflies and they never visit it. So far this year no caterpillars on the fennel...maybe they'll show up later? They do rather like to spread their seeds about! You have a lovely garden.
Gail

Hi Kim, you are an inspiration once again. When company is coming, go out into the garden and take some photos then post about it. A great stress reliever and you don't end up doing a lot of frantic work that no one notices anyway. I am impressed with your non gardening weekend story also. Thanks for showing us some of your stomping grounds. You are one energetic gal! I loved your reseeders too and envy the amarathus. I have tried to grow it several times and this year have one little sad 'Hot Biscquits', not exactly like the picture on the packet. Hope you had/are having a good visit with the relatives.

My garden and house are looking neglected too, which begs to make me wonder where I have been lately

Garden therapy is much better than cleaning therapy which is no therapy at all! I love the 'everything but the kitchen sink' comment. I think they look great. The silver textures are wonderful. Your sedum and yucca? with the hydrangea in the background look so nice together in that first shot and the bronze fennel belongs in a 'hell strip' as it can take over. Have fun with the 'Apartment Dwellers'!

Well geeze, why'd I plant fennel if it doesn't get butterflies? All my litris and most of the ironweed is done, so the butterfly bushes are taking over until the joe pye weed and caryopteris gets going. Aren't you happy to know this? Yes you are. I hope my bluestone echinops blooms, too--cool thing that it is.

Zen is so boring! I like the textures in the container & they are much more interesting than anything Zen could ever be. I find that avoiding unpleasant tasks until the last minutes is very inspirational. It's motivating to have to run through the house with the vacuum because your guests will arrive in 10 minutes. I love the idea of a flower as a mini mace. There's that Brunhilda factor going in your garden again.

The Golden Marjoram is lovely next to the heuchera.
I too like your container colors and textures. No zen needed! My containers rarely look the way I picture them to begin with. They're all experimental it seems...and only a few turn out the way I really want them to. That's part of the fun though.
My cleaning gets done best when company is coming. I need to invite someone over ;)
My floor needs vacuuming, but I'm off to the garden again...after taking a break for a rain/hail storm this afternoon. At least it gave me a chance to visit a couple of blogs...but not enough time to vacuum :)

Heh, you have discovered my favorite "excuse" for not cleaning house! What the hey, I say that a house is to live IN, nor FOR. So enjoy the garden therapy every chance you get! :)

Your bronze fennel is amazing! I just planted a small one and now I have somebody to look up to. It probably won't amount to much until next year.