My last week of vacation did not quite go as planned. By that, I mean that I did not get nearly as many of my projects completed as I had wanted, largely due to an unseasonable spell of cold weather.

Not only were the temps too low for me to finish staining the fence, but also I suddenly had to bring tender houseplants inside ahead of schedule! (Admittedly, this is my own internal schedule; I am not good at following things like garden chore calendars.) I then had to sand, prime and paint my collection of trashpicked plant stands quickly, in order to get said plants off of my kitchen floor and allow me to cook in there again.

I did sneak in a little time for garden cleanup, too, as my tomatoes, peppers and eggplants had to be harvested as well. I got the tomatoes and peppers before the cold set in, but these aubergine* plants were very wilty before I managed to get the remaining eggplants safely roasted and frozen away: 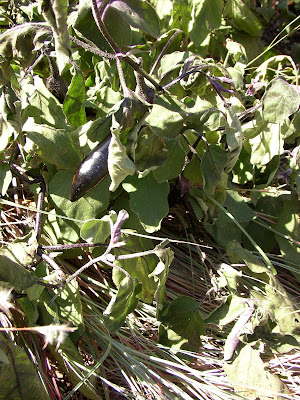 While out cleaning up the eggplants, I couldn't resist taking a few other photos of the backyard garden as well. The light (at around 2pm) was bright and intense in a very cold way, but unlike the summertime sunshine, it no longer bears down from directly overhead. Instead, it shines at an angle, casting interesting shadows on this vignette of rock, 'Dragon's Blood' sedum and coppery beech leaves: 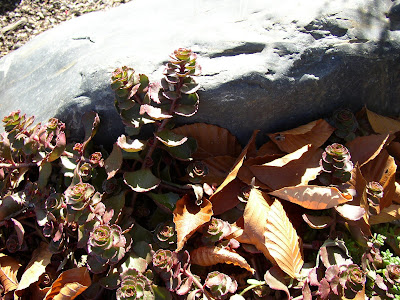 I never seem to tire of seeing the red sedums and beech leaves together. There's something about the graceful arch of the leaf veins and the compact swirls of chubby sedum leaves that I appreciate together. Here the two are mixed with some of the more lax blades of 'The Blues' little bluestem: 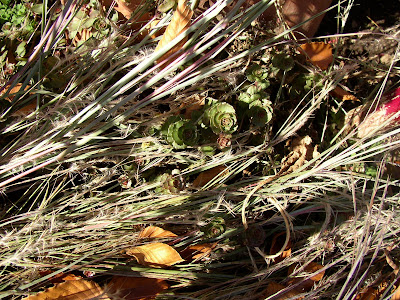 From an artistic standpoint, I like how the grass blades add a strong sense of line and motion in the photo above, breaking up the meandering swirls of the other plants' foliage. Nearby, some of my 'Hopi Red Dye' amaranth leaves were wilted, too, but the plants still show up well against the brightening clumps of 'Rotstrahlbusch' switchgrass: 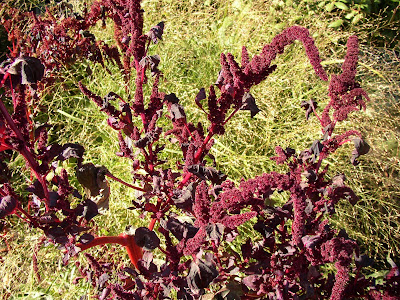 By the way, this panicum is often labeled as "the best of the red switchgrasses," but don't believe that for a minute--unless mine were mislabeled when I got them! Mine may have a little red on their tips, but they turn this bright green-yellow in the fall instead of the intense red I was expecting. It's still a pretty and welcome addition to the garden, though. In the photograph below, look underneath the grey house at the far end of the bed to see its frothy brightness in the bed planted outside my dining room window: 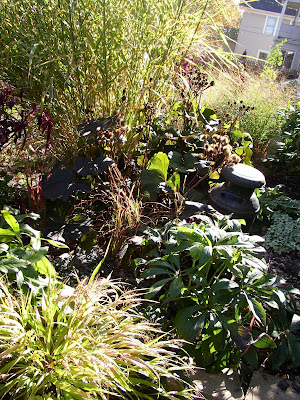 Why I can't seem to take a straight picture of this area, I will never know. Maybe it has something to do with the fact that I'm always cocking my head to the right and thinking about what it will look like when it fills in?! There's always something to see here, in any case... right now, the fuzzy seedheads of 'Othello' ligularia keep attracting my attention. Here they are against a background of their own backlit leaves... 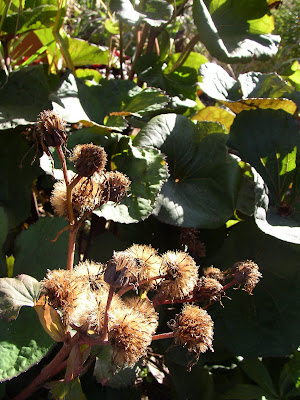 ... but I also enjoy them in this picture, which shows a clump of the seedheads resting against the cap on my trashpicked black milk can: 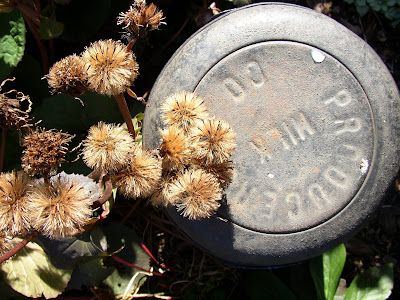 A few of the backyard beds look very messy; so much so that I am loathe to show them here. But I have been enjoying a couple of other rather unkempt areas, like the driveway bed. With lots of assertive, colorful foliage in this bed, the quieter plant combinations often fly under the radar. One such are these shiny leaves of European ginger with the similarly-hued green of the nearby Buckler fern leaves: What keeps this combination from being boring for me are the contrast of fine-textured fern with chunky-textured ginger, and the way the shiny ginger leaves look next to their matte-finish fern counterparts. But it's nice to have the color continuity there... too much contrast all throughout a garden can just look like a jumbled mess instead of the organized chaos that I love.

Closer to the house in the same driveway bed, my little 'Ozark' alpine strawberries are blooming like crazy. I renovated this little bed a few weeks ago, and I like the way it has responded: 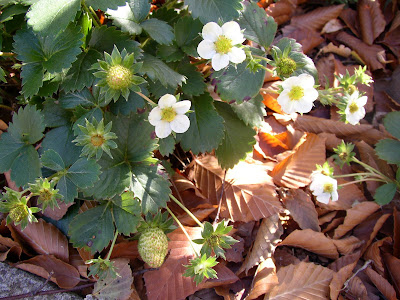 Some berries on other plants are turning red already, and I'm looking forward to eating at least one or two. Late fall berries are not nearly as sweet as their late spring and summer cousins, but their tartness is still a welcome burst of "fresh" in my mouth at the end of the growing season.

I still have some October Observations to share and show from the front yard... but now my vacation is officially over and I need to get myself ready to head back to the grind tomorrow! So stay tuned for Part 2 of this fall ramble... :)

*English and French kitchen gardeners almost often refer to eggplants as aubergines. The inner me who dislikes pretension is afraid to call an eggplant an aubergine too often. But I also feel that "aubergine" is a much more beautiful word, aesthetically speaking, so I do use it sometimes. Think about it--wouldn't you be more likely to order a dish with the grand name, "Aubergine Parmegiana" than you would to order "Eggplant Parmesan?" (Melanzane is what the Italians call eggplant, however, so it's usually referred to in Italy as "Parmigiana di Melanzane" instead of either of those two options!) But as usual, I digress...
Posted by Unknown at 9:33 PM

Love those fuzzy seedheads and that amaranth look great against the switchgrass. It's all about contrast in shape and colour, isn't it?

The Dutch also refer to eggplants as aubergines. :-)

I see that your The Blues are still lax! Mine perked up during the driest times, but most of the time it is reclining....looks like a move is in store for the spring. I love seedheads and daily am becoming more fascinated by them...which is good for a gardener in fall....when you look closely they are more than brown.

Btw, that is a great looking ginger plant...I have a native but the leaves are not shiny.

How daring! Singing the praises of a garden on its way out. I love the juxtaposition of dead leaves with seed heads or still green plants.

The word aubergine should be used as many times as possible through out the day- pretension be damned. It sounds like chocolate pudding feels on the tongue. The same reason I use the phrase je-ne-sais-quoi. It sounds beautiful and describes perfectly what no other phrase would.

Mind you- my freckles and buck teeth go a long ways towards negating any pretension I might aspire to.

Hi Kim, I am in love with your jumbled mess versus organized chaos theory! HA Also the aubergine versus eggplant, no contest on who wins that battle although spelling challenges might enter the fray there. And the above comment is brilliant. I feel the same way about my funky glasses. Who can be taken seriously with rhinestones at their temples! ;->
Frances

Loved the off-kilter house there. Must make walking around interesting. I guess you just can't wear slippery shoes, huh?
--Kate

Love the word 'aubergine' both as a color and a vegetable. It rolls off the tongue doesn't it.

Dearest Kim ... no one describes the challenges of gardens better than you with camera near! You have the gift of embracing all your fans with your enticing charm and wit. I always smile and chuckle walking beside you. Big hugs!

Isn't ligularia a great plant, Kim? I was admiring the seedheads on ours last week, before the big cold snap and even bigger wind. Now we're having mild temperatures and fog, of all things, in early November; which makes the denuded trees look quite oddly charming.

Wonderful pictures of the Othellos. I will be posting a picture of a flowering palm that perhaps you will know ... once I get my pictures downloaded.

Always a pleasure to stop here. You have inspired me with your notes about cleaning up your garden.

Add my vote to the mix, and you have a clear mandate for using the word aubergine to your heart's content.

Love the amaranth. I'm always wanting to grow them, but, alas, no room.

Greenbow Lisa, thanks! It is kind of funny how much the weather can fluctuate just a few hours' drive away, isn't it?

Yolanda Elizabet, you Dutch definitely use the more fun word, too! :) I love the fuzzy seedheads of the ligularia... so much so that I don't even mind dealing with their awkward not-quite-orange, not-quite-yellow flowers in order to get some of these seedheads later.

Gail, they definitely ARE laying down on the job! But the sprawling eggplants didn't help them any in that respect, I admit. I have the Canadian ginger that you have, too, by the way. I like them both, but the European is sooo pretty with its shiny leaves.

SMC, I love to sing the praises of the fall garden! I sometimes like fall better than summer or spring, truth be told.

Oh, and now I can't stop saying, "chocolate pudding," and feeling how wonderful those words sound on my tongue. :)

Frances, you should hear an Englishwoman say, "aubergine," really. They do something to the "g" sound that really makes it sound even more refined! (And I agree with you and SMC, by the way... there are so many things about me that make people unable to take me too seriously!)

themanicgardener, well... they're not really ripening. More like slowly turning color. We'll see if I get any more berries off of them--since they're everbearing types, I've eaten quite a bit from them already throughout the year!

And LOL at the off-kilter house comment! I lived in a house my senior year of college where we had to hold onto the kitchen countertops if we were wearing our in-line skates... it was that tilted. But this house... the off-kilter in this picture is all the photographer, and not the house!

Layanee, it really does!

Joey, you always make me smile... but I don't know that I've ever been referred to as charming and witty before! :) I am glad that you feel like you're walking beside me on this posts, by the way... that's a lovely thought.

Jodi, fog? Really?! Strange for November, to be sure... but then, Nova Scotia is a very special, enchanted place where anything can happen... :)

Westcobich, a flowering palm? I don't know that I would be able to do any sort of identification, but I can't wait to see it!

chuck b., I don't know if I've ever had a clear mandate before--yippee!!! lol.

And yeah, you would need room for the amaranth. If only because it tends to spread and take over...