While weeding and mulching the side bed this week, I made a fun discovery: It was time to harvest my first currants!

Last year, I planted two 'Red Lake' red currant bushes in the bed directly across from my side door. Currants were supposed to be able to take some shade, and could be trained to be fairly compact... both key for that area, and I was excited to be able to add some more fruit production in that kind of space. I didn't let them flower or set fruit last year, but this year I did get quite a few strands (my word for them, not necessarily the right word!) of currants from the smaller of the two bushes: 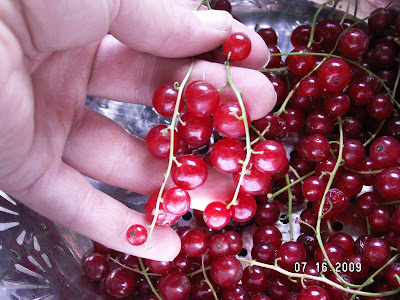 Once they were harvested, it was time to figure out what to do with them. I removed the berries from the stems, rinsed them, and dried them in the open air. Then I went online to search for recipes and figure out how to use them.

This was a harder search than one might think, as what we usually think of as currants is really the dried fruit of the Zante grape. Red currants are an entirely different fruit, and are most often used cooked (because they are so tart when they're fresh--I can vouch for that personally, because I tried one raw) in jams, fruit soups, tarts, etc.

I had really wanted to make jam, but since my harvest was not exactly bountiful--I only had slightly more than 1 cup of fruit to use--I decided to try to make a freeform tart instead. The recipe I cobbled together used pie crust, sugar, cornstarch, a pinch each of cinnamon and salt, and all of my crushed currants. Here is the final result: 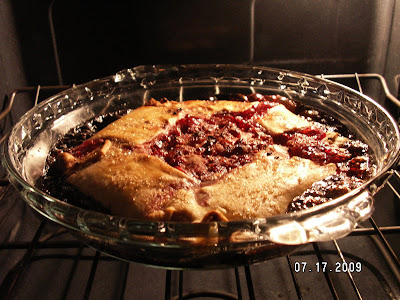 Looks really pretty, doesn't it? It's tasty, too, but as you can see at least half of the currants managed to jump ship and escape the tart crust! They bubbled and baked on the outside of the pan, turning into a tart/sweet jam of sorts on their own. I used some of the crust to scoop up extra filling as I sampled it.

Next time, I will leave these freeform tarts to the sturdier fillings (plums, apples--anything that holds its shape better) and instead make a smaller pie out of regular crust or maybe incorporate them into a cobbler or crisp. Ideally... well, ideally I'll just have a larger harvest next year, and plenty of currants to use in multiple recipes. But as always, we'll just have to wait and see what next year's gardening season brings!

Even if it looks a little messy I think it looks delicious. I have never eaten this currant. It looks something like a gooseberry. We got our first blackberry this week.

Even though it wasn't 100% perfect, it looks very yummy!

Congrats on the currant harvest. That's exciting. I planted two blueberry bushed in pots this year. They were dryroot and the instructions said to pick off the blossoms this first year as you did. Well I let two of them go ahead and make berries. One of the berries we shared (yes, half a blueberry each) and the other one was snarfed by a critter... probably Chomper 1 or 2.

Hi Kim, The berries are beautiful, and that tart looks delicious.

It does look delicious, never mind if it's a bit messy. Now I want to make one, but it means convincing longsuffering spouse to make pastry (you could shingle the roof with my pastry!)

Currants are high on my list of must haves and I think restrictions on buying them here have been lifted recently (they had been considered a host for a white pine disease I think). I planted a gooseberry in my own garden last year and talk about tart... I thought my face was going to fall off! And like you, I'll have to wait for a decent jam-sized harvest.

Yum! never read a blog about such lovely baked goods, along with pictures, when it's past 10 at night and you know you shouldn't have anything at all to eat, much less a pastry or even a nibble of one.

That looks delicious. I can't remember trying currants although I saw quite a few in England.

looks like some delicious success! We are 'currently' better at volunteer berries than cultivated ones. Maybe I'll fertilize the strawberry/berry/etc bed really good this fall, and see if that helps. Neglect certainly has n't worked!

I want to add to my food plants next year and currants are on the list of possibilities. My dad insists I try the yellow variety. He says that they are sweet enough to eat fresh.
These look so tasty. I might have to get two kinds of currants!

Looks wonderful. Everything tastes better when you grew &/or picked it! We had a light cherry crop due to pruning, but it is about time for blackberries. ~Paula

you currant growers are getting me envious. I had my own discovery last night... taking the garbage out led to the first ripe tomato

I think my mom grew these. All I remember is the wonderful currant jelly!

Might be messy but the free-form tart sure looks tempting, Kim!

Apparently the removal of the ban is kick-starting creativity among chefs according to last week's New York Times Food Section.

I became aware of the Ribes-currant/Zante currant thing through Irish Soda Bread. Have seen recipes calling for dried currants, Zante Currants and raisins so maybe it doesn't matter too much in this instance!

My hubby planted 2 currant bushes...one red, one green, a few years ago. This summer he harvested a nice bowl full of the green, and a handful of reds that the deer graciously left us. They apparently love them. A taste makes your mouth pucker, doesn't it?
I put mine in the freezer, not knowing quite what to do with them. Not really enough for jelly.
Your dessert looks yummy...a lot like something I make with blueberries (and other fruit) called Mountain Pie...delicious, and easy as pie :) I think I'll try them in that recipe.
Maybe we'll both get enough for jelly next year. Adding apple juice to the currant juice makes a nice jelly.