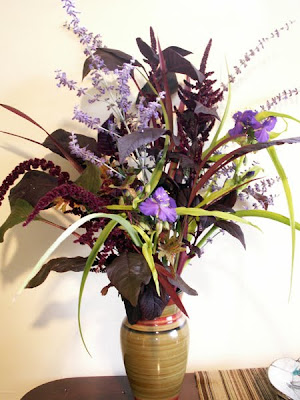 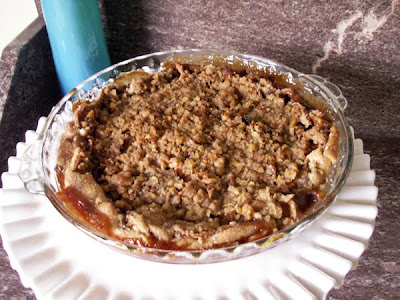 Kim. I really like your bouquet, it has a good use of colour, and space. Actually, I think that I will steal that colour scheme and use it at the flower shop tomorrow.

Yum, I can almost smell the apple pie. Sounds so good. Your bouquet looks so pretty.
I know what you mean by cluttering up the drafts. I have Scribe Fire and have all kinds of half written posts ;-)

Just keep snipping and posting. It is good to hear from you. Your bouquet is beautiful. It won't be long and we can't be doing this.

I like the random clipping approach. I wish I could share my lemongrass with you...no killing freeze last year means mine is TOO big now. I've got scale on my Meyer lemon...now I'm thinking I should follow your lead and cut that part off. Maybe this weekend if I get up my nerve!

While the bouquet is striking, that streusel really got me. I need to go buy some apples now.

Kudos dear 'soul sister' (although old enough to be your mother), Kim. Random cuttings, a fine post, and your bouquet, delightful. In all seasons, nothing lovelier than random snipping from the garden ... bringing the outside in. A lovely photo of 'stunning' YOU & Steve (and can we talk about your yummy Apple Pie with Walnut Streusel)! Loved your 'getting to know you better' meme ... here is my boring 'Ho-Hum Housewife' one from 2007 ... (http://tinyurl.com/ycwslkehttp://tinyurl.com/ycwslke). BIG HUGS, dear one!

Kim,
The streusel looks very yummy! Will you make some the next time I come visit? Also, the bay laurels look nice drying in front of that japanese saki set!

Hocking Hills Gardener, don't you hate those? I don't even know what to do with some of the half-written posts... I deleted a dozen last week, but still have 3 more that I keep telling myself I "might" do something with. *sigh*

Greenbow Lisa, maybe when we can't be working outside, I'll have more time to blog? Catch-22! :)

Leslie, I wish you could share your lemongrass with me, too. lol. Let me know what works with the Meyer lemon... I have no idea whether it actually DOES work, though, remember. This is just a gut-instinct thing to try.

Mr. McGregor's Daughter, the streusel topping was wayyyy yummy. I think I want to try it on a pear pie next. Or maybe on a peach pie, but with pecans in the streusel instead of walnuts? *drool*

Joey, ah... it does my soul good to see you commenting again! And soul sister works--I think many souls just have an "ageless" kind of age to them, so the age of the bodies that house them are pretty much irrelevant. :)

Craig, doesn't that sake set look nice?! It's sitting on an old wooden tray that perfectly corrals it... I'm thinking about decorating my dining room around it, I love it so much. Thank you again for bringing that back for me from Japan--I couldn't have picked out a more beautiful, perfect one myself! I officially take back all of those times growing up when I said that you were a pain in my butt. ;)

Random cuttings is a grand idea. Can I steal it? Although in my case, the thoughts would be far more random and incomplete than yours.

Great bouquet. Delicious looking pie (I'm sure it was!). And real bay leaves? Do you cook with them?

I think it's very hard to be able to do everything you need to do (or want to do!). Nice post!!

Robin, absolutely! Imitation is the sincerest form of flattery, right? :)

Benjamin, I'm still giggling at your comment--but I promise, if you were close enough, I would bring one over for you and your wife to share! *grin*

Shady Gardener, I ABSOLUTELY do cook with the leaves! This is why I grow the bay laurels, even though they're fussy in the house over the winter... the fresh leaves taste fantastic (you can actually smell them) and even the dry leaves are so much better than the (probably old) packages you can buy in the grocery store. In other words, I highly recommend it. :)

I once treated a 4-year old plum tree with scale (or witch's finger fungus)by cropping back almost all the branches to the trunk -- all that were wrapped in the black "finger" growth. The pruning was done early fall. I also planted a circle of garlic cloves around the trunk (great bacteria/viral fighters, so why not?) Next spring the plum re-grew healthy new, uninfected branches, leafage and plums. Hope you have similar luck with your bay tree, but may take until the next growing season. Cheers!

Love your colorful bouquet, and oh my, that pie!
Hope your bay trees revive!

I've heard that bay is quite susceptible to scale...but I have to say an advantage to the south is that mine is in the ground - and is over 6' tall now! So if you're in need of some fresh leaves, let me know and I'll stick a few in the mail for you!

As for pruning it way back, I'm guessing that it will be okay. I've had some suckering in mine, which bodes well for you. Good luck!