Yet again, I'm late... but here's my Foliage Follow-Up for May 2010.  I'll keep it short and sweet, though, with many picture but few words.

Sea kale is always a star in the front garden.  I love the way it echoes the crinkles of the purple lyreleaf sage that sprouted below it here: 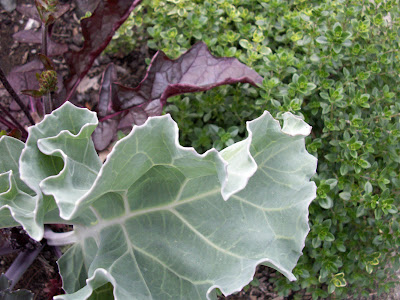 And how it combines with the blue tinges on the variegated iris, and lavender: 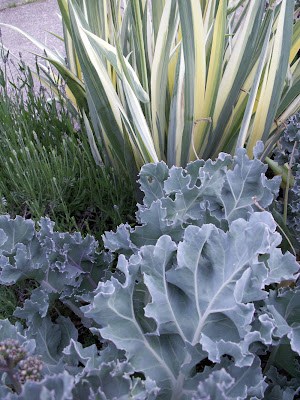 More blue foliage, first a blue-green on the emerging sedum: 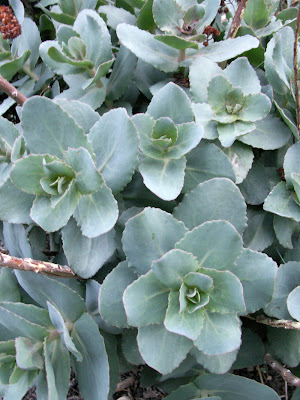 And then a different lavender, contrasting with the dark purple elderberry foliage: 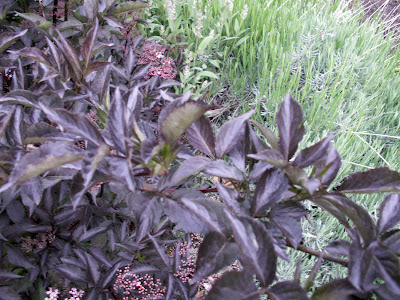 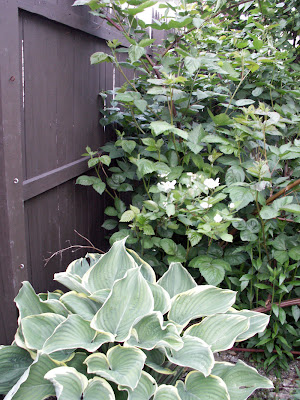 A gold-and-green hosta, name unknown, with the golden foliage of 'Sweet Kate' spiderwort: 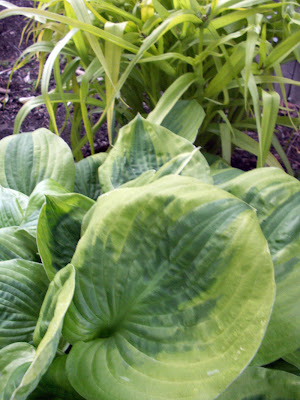 More subtle contrast, this time with the same plant form but one standout color: 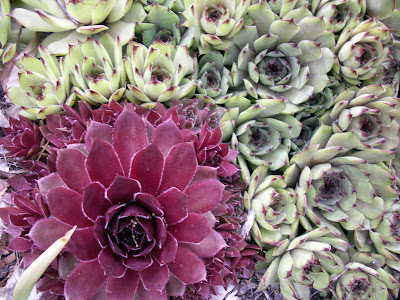 Form makes for subtle contrast, too.  Here, the vertical, fine-textured green chive foliage adds interest at the feet of the blackberry: 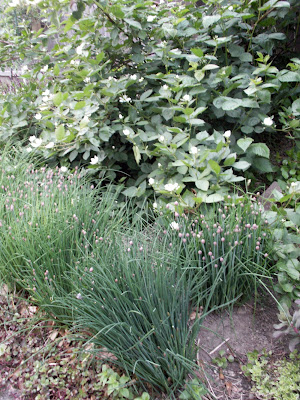 The last of the subtle contrast photos.  Golden lemon balm next to the foliage of my red currant: 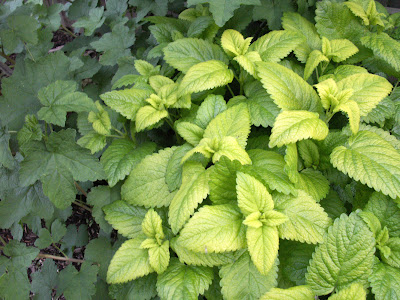 And golden oregano picking up the golden veins of the 'Ivory Prince' hellebore it underplants: 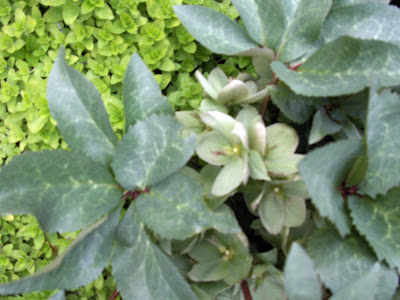 Golden oregano provides a little more drama in other areas of the garden.  Here with 'Northern Halo' hosta and Japanese maple: 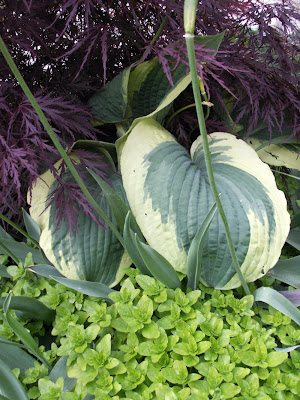 And here with a stepping stone (in the spot where the dog tends to pounce, when she sees another dog walking on the street) and the bronze-leaf carex buchanii: 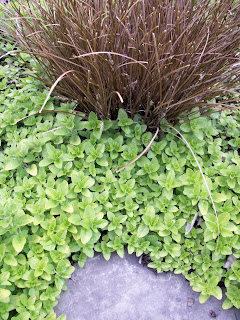 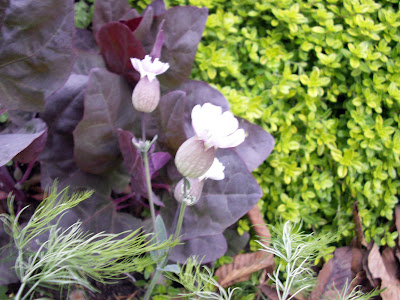 More of the red orach--it's a prolific reseeder, but when you can eat the seedlings you pull, that doesn't seem to be so bad.  Especially when the seedlings look so lovely with Japanese painted fern: 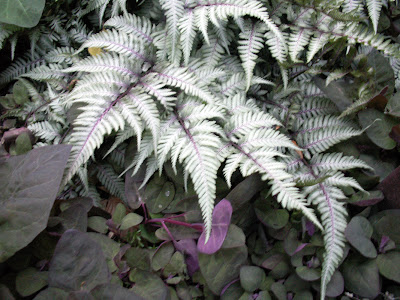 And 'Sum and Substance' hosta, too.  That's sedum album (top) and leptinella (lower) between the stones under the grape arbor: 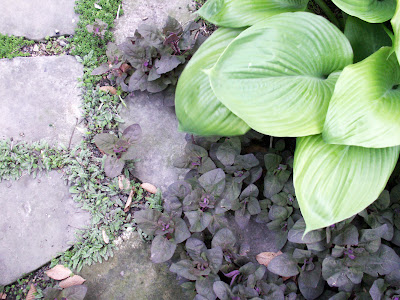 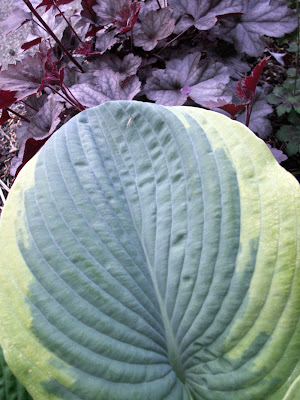 Actually, they look pretty with heucheras in general, I think.  Here's another unnamed hosta (might be 'Lakeside Shore Master'?) with various peach-leaf heucheras temporarily planted nearby: 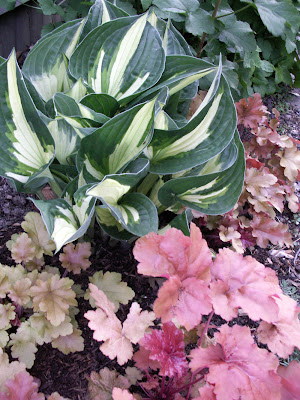 I said temporarily because those will likely get potted up into planters later in the spring.  This beauty, however, stays put all year round: 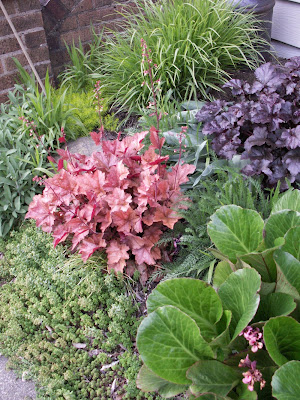 And that concludes my Foliage Follow-Up for May 2010.  I hope that you forgive me its lateness--and its length!  It's just so hard to pick only a couple of things to showcase in May, when the foliage is so fresh and beautiful in the garden.  :)

For more foliage delights, check out Pam's Foliage Follow-Up Post... and don't miss other garden bloggers' posts, too, linked in the comments there at Digging!

Your foliage photos are always worthy of the wait to see them. You have such a colorful garden. I am always inspired to try to work in more color after seeing your combinations.

Kim, You are the Queen of Textures and Color Combos! I never fail to leave with a few good ideas~The red orach and Japanese Painted Fern are fantastic. gail

Awesome foliage post, Kim! Your combinations are so inspiring. If I lived in your zone I'd copying a lot of those!

What a great post. I'm going to have to pay more attention to foliage texture. I've never seen sea kale but I am going to look for it.

Lots of stunning combinations, Kim. You always have had a keen eye for great companion plants. Love the veining in the Sea kale and, wow, the peach heucheras and hosta are show stoppers. Your bergenia is looking mighty healthy too. Isn't spring grand!

That Atriplex takes forever to go to seed in my mild-climate garden, and while I'm waiting for that to happen it starts to get on my nerves with its unappealing late season look, then I lose all my patience and rip it out. So unfortunately, it does not self sow much for me which is too bad because mostly I like it.

I wish I had some room to experiment with the sea kale. I've admired it on your blog for many years now.

Everything seems beautiful and full of life. Those plant combinations are the best that I have seen. Have a great day!