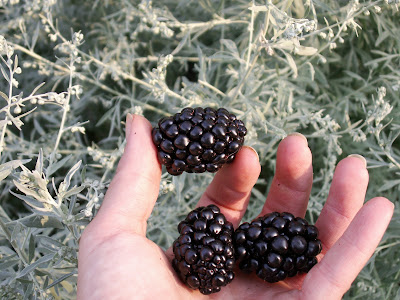 
You might wonder:  What have I been feeding these things?  Nothing special, really.  I had some leftover Citrus Tone after having to buy a bag to keep my Meyer lemon from dropping its last fruit.  It worked beautifully (and turned the leaves back to green, and caused a growth spurt and more flowers!) but left me with almost an entire bag since the Meyer needed so little.  I read somewhere that it could be used on other fruit as well, so I gave the blackberries, raspberries, fig, peach and strawberries a shot as well.  But I really thought it would be too late to have an effect this year yet. 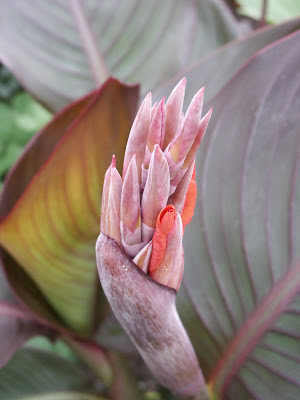 I've grown canna before, and it's not particularly hard to get them to flower.  But this is a dwarf, apricot-flowering canna that I bought on super clearance last fall, cut back, and then left in the basement all winter long. I kind of forgot about planting it for a little too long this spring as well, so it has understandably been pouting for months.  Apparently I've been punished enough, and it's ready to put on a show.  Yay! 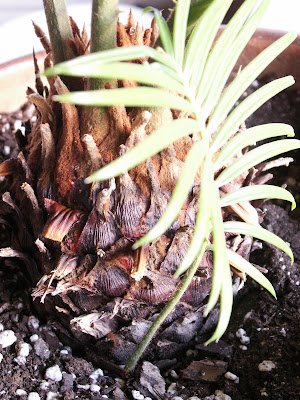 I was gifted with two gorgeous (and huge) pots of cycad last fall by one of my coworkers at the garden center.  After they outgrew his plant area at home he brought them to his gym, where they thrived... but he had to move them out last spring due to a lengthy remodeling project.  They summered in his garden and then he offered them to me.  I overwintered them in west- and north-facing windows in my studio room, and then repotted them into heavier clay pots this spring.  My best guess, after consulting a friend or two who are much better with tropicals than yours truly, is that the little green sprout above in an offspring... anyone out in the blogosphere able to confirm that for me? 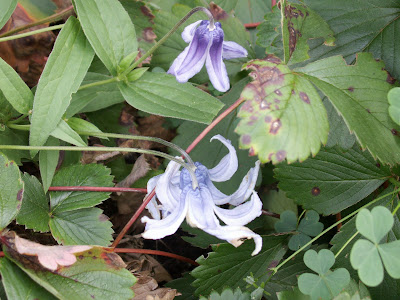 The strawberries that surround it are edible plants, and therefore are getting a little extra water now that I see they have been stressed.  (Yeah, yeah... I need to weed out the clover, too.  I know. :)  The clematis that is planted amongst the strawberries is appreciating the extra water--and maybe the Citrus tone that I mentioned above--as well, and has thrown out multiple blooms for the first time in its 4 years in my garden. 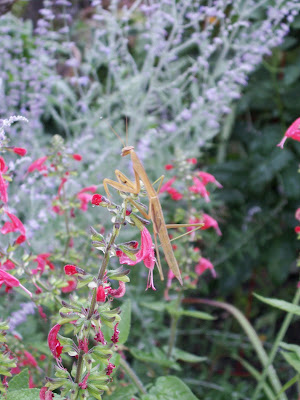 While I was watering the tomatoes and peppers after work, this mantis hopped up indignantly onto the salvia and out of the line of fire. I added insult to injury, apparently, by grabbing the camera and attempting to get a really good portrait of him on his new perch. 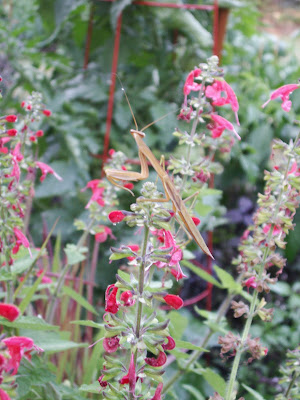 He obviously didn't feel like sitting for said portrait, so I moved to the other side.  No luck there, either.  He turned and presented me with this: 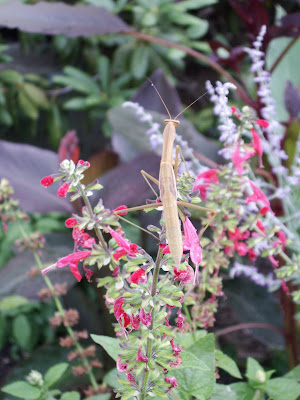 I felt a little bit like an inadvertent paparazzi, but I kept on snapping.  Eventually, he turned just enough for me to take one last profile shot: 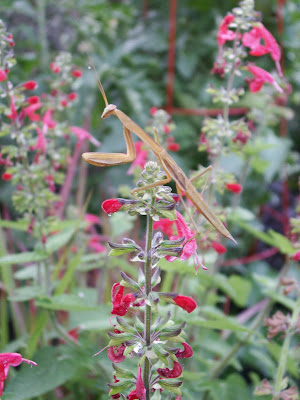 I think he only consented to the profile picture in the hopes of getting my camera out of his face, but I'll take it!  I know that the mantids eat all bugs, good and bad, but I was excited to see him in my garden.  They're cool little creatures, and very fun to spot.

He took up the remainder of the space on my camera card, however, so I'll have to show you pictures of Surprise #6 later in the week:  My Japanese anemones have already begun to bloom!  (Eek!)

Obviously your plants liked the citrus stuff. Isn't it exciting to have a new plant growing on the cycad. I have never grown these. It will be interesting to watch it grow. You (your garden) are full of surprises. My newest anomone is blooming too. Weird.

I've never had a mantis in the garden. What an event! That's definitely a thriving garden.

Good haul of pictures. My anomones are blooming too. It seems a little earlier than usual.

How fun, giant blackberries, offsetting plants and a praying mantis! They are the coolest bugs.

All looks wonderful, Kim, and those mammoth blackberries (my favorite) good enough to eat :) August hugs.

what great surprises! And great photos, too. Our blackberry patch was 'destroyed' when we had a new house foundation put in. Now my husband and I are fighting because the blackberries are coming back in force, but I've started planting a Rose Bank. We are trying to figure out how they can co-exist. But I refuse to have an impenetrable mess again!

It's good to see August garden surprises that are pleasant ones, Kim! Usually I see a few mantids around, but none so far this year.
I bought citrus food from Smith & Hawken before their store closed...box empty now -think Citrus-Tone sounds like a good one.

Holy Blackberries!! They look yummy. I really need to get out to my sons and pick some of the wild blackberries, but it's been so darn hot here that I just can't face donning the jeans and long sleeve shirt required to tangle with the brambles.

nice surprises. I expect that you will figure out the density of a traditional eggplant, we finished up out math experiment yesterday

Kim, It's breakfast here and I want some blackberries! I can never make enough compost to feed my plants~I might have to try some good Citrus fertilizer, too! Love the praying mantis, but there is something eerie about them when they turn around and look right at you! I think I've seen one too many fifties horror movie! gail

And the preying mantis...double wow, wow!

I am now tapping my foot waiting for my amarcrinum to bloom. It will be my last surprise/novelty of the summer I think.

The sage is very pretty with or without its insect friend.