The calendar says that winter has not yet begun, but the garden has weathered a good month of early-winter rollercoaster. I have only lived here for 7 years now, but that's long enough to realize that there is no such thing as "typical" seasonal weather here in Northeast Ohio. I awoke to an entirely unexpected 4 inches of snow on the driveway two weeks ago, for example, but now we're back to wearing sweatshirts!

Since today dawned sunny and bright, I decided to go out in the afternoon and take a few pictures to evaluate the level of winter interest in my fleldgling garden. Let's start with a picture of the front beds, most of which were created late in 2005 and planted this year: 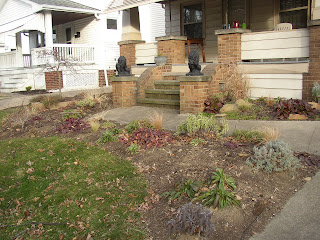 As you can see, nothing has attained much height yet. Even the ornamental grasses are quite small. What does jump out are the purple and red plants: purple culinary sage in the near right corner, three unnamed heucheras in front of the sidewalk, 'Bressingham Ruby' bergenia next to tan-colored rocks just in front of the porch.

There are two major failings that I see in the bed in front of the sidewalk. One is the lack of a definite edge between the bed and the grass. I admit that I've been lazy about that, mostly because I have long planned to expand the bed to change that curve--I already purchased a 'Sykes' Dwarf' oakleaf hydrangea to use as part of that expansion.

The other downfall is the large patch of bare earth where three crambe maritima, aka sea kale, will be emerging in the spring. (You can see them during the growing season here. The crambe are the glaucous foliage that you see behind the orangey spires of digitalis parviflora, to the right of the first purple heuchera.) 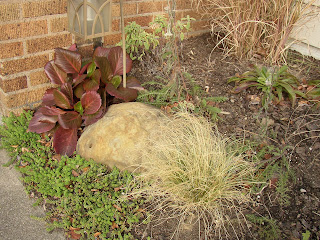 The crambes tend to sprout late and I have a few groupings of early tulips planted in between them, but that doesn't help much at this time of the year. So I am making a note to add some of the groundcover sedums that you see near the sidewalk on the left side of this second picture.

'Chubby Fingers' is the name of this cultivar, and I brought fistfuls of it with me when I moved to my new house. Both in the old clay soil and in the new sandy soil, I have found it to be a vigorous but polite spreader. It stays mostly evergreen, and sports taller shoots with white flowers in the early summer. It should provide a nice carpet of green in the crambe area during both winter and tulip-time, without bothering those sea kales during their growing season.

Besides the bed expansion, there are already a few other improvements planned that will change the winter look of the front garden. For one, I plan to paint those three pieces of siding--and the weird darker beige trim piece--that are below the level of the porch floor. They have irritated me since I moved in, because their light color makes them appear too important. Painting them a darker color should help them fade into the background. 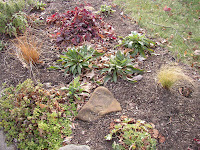 A climbing rose, 'Dortmund,' will be going in next to the porch. The lavender will move to its new home, replaced by the 'Hameln' pennisetum that is currently biding its time in the backyard. Small plants will grow. Some plants will be divided or propagated and used as fillers. Other plants will be subjected to the gardener's fickleness and be moved elsewhere.

Sometimes I get frustrated because the garden in the photos does not match the garden in my mind's eye... but then I remind myself that I've only lived here since October 2004 and some things just take time. And that I'm learning more about gardening and garden design all the time, so it can only keep getting better as I stop making so many newbie mistakes.

All in all, though, I have to say that I'm fairly pleased with the way things are looking so far. I know that I'm lucky to have some more experienced gardeners visit my page, though, so I would love to hear some feedback from all of you. Any plants that you never expected to interest you in winter but find yourself watching from the kitchen window? Any interesting ways to fill spaces in the winter garden? I'm all ears...
Posted by Unknown at 11:42 AM

You have an artist's eye, for sure.

Great blog. I have added you to my blogroll under "Links to Peace, Connect with the Earth".

Kim,
I think there is plenty of interest in your garden. If you start feeling too critical, do what I do... go out and look at your garden when it's almost dark... it will look fabulous!
Don

Kim,
I like to read that you plan expansion of those front beds - I'm not a lawn fan! If you do leave some (but you'll still have the chore of mowing etc)it's best to have a definite edge - brick maybe or a metal edger flush with the lawn so you can run a mower over it. A crisp edge sharpens things up.

Hi Kim. I think its good to be critical about your garden the important thing is to not be too hard on yourself. I smiled when I read about the edging of the grass, I was just thinking how can I tell you the border would look even better if it had a nice edge to it then I read a bit further and saw that you thought the same thing yourself so you let me off the hook there - thanks LOL! I think neat edging to the grass makes a garden look much better. Just clip the grass and then work the edge of the soil with a hoe throwing it back a little as you go and this makes a nice definition to the borders. You can see a good example of what I mean if you visit the posting for Wednesday, October 18, 2006 on my blog although I think you are probably already aware of the difference it make. Hope you have a good Christmas and I look forward to viewing your blog in the New Year. Bob.

Thanks for the tour. Everything looks great. My garden is alway a work in progress even after living here for 6 years so don't be too hard on yourself.

I have a variegated evergreen euonymus that I think looks great in the winter.

For more winter interest, how about witch hazel or helebores? Hollies are nice, too...plus there are some awesome new conifers with white or yellow variegation-see
http://www.waysidegardens.com/
or http://www.forestfarm.com/ for some examples. I think your gardens are coming along quite nicely...grasses are my main winter interest items, along with witch hazel and holly.

Thanks for all of the feedback!

Kristen, thanks for the lovely comments and for the link! I can't wait until you start blogging about your garden, too. :)

Don, I LOVE that idea! You're right, twilight does wonderful things for even the most ugly part of the yard! lol.

John, you have figured out my diabolical plan... I am trying not to put up any sort of edging because within the next 3-4 years I plan to have no lawn left! I don't have the money to do everything I want right away, though, so it will be a gradual process.

UKBob, I remember your edging now since I went back and looked at the post. It sure does look nice by that wall! Hope you have a great Christmas as well. :)

Thanks, Anthony, for stopping by! Variegated euonymous... they tend to grow "up" neighboring things, right? Maybe one would look nice growing up that ugly siding that I'm trying to hide/minimize. Hmm...

Lisa, I have helleores! They're just too small to make much of an impact yet--and a darling little princess squished the smallest one as she cut through my garden beds during her Halloween quest for candy. :( (Bri says we should put up a fence of impalements next year to keep the kiddies out... lol.) I don't think I have the room for the witch hazels, or I'd already have planted one of those lovely things...

I think your garden is wonderful! I know what you mean though, about it not matching up with the garden you see in your mind. My garden here is only four years old, and is nowhere near where I picture it being.

The changes you already have planned will definitely add winter interest. As far as the plants I'm loving right now--my ornamental grasses are the only things that have any movement out there right now, so I love those. I have a couple of red twig dogwooods, ('Cardinal' and a European variegated variety) and I am loving the color of their stems right now. Besides those, I am grateful every winter that I planted a few arborvitae in the yard. They are not sexy plants, and I tend to underappreciate them when everything else is growing, but there's something about that rich green, and their tiny cones, that make them irreplacable when everything else looks brown.