Subtitle: Three Things I Would Like to Change in the Garden This Year... But In All Honesty Probably Will Not

Everyone wishes that they did things a little differently, in one area of life or another. I am as well aware of my shortcomings as the next girl, but that doesn't mean that I feverishly scan the self-help aisle of my local bookstore on a daily basis. Instead of agonizing over them, I tend to embrace my faults as mere... idiosyncrasies.

Although I very rarely actually keep them, I feel obligated to list resolutions every new year anyway. Maybe I do it to keep myself humble, maybe there's some small part of me that actually holds out hope that I might work on them, who knows. But here are the resolutions that pertain to my garden, in no particular order:

In 2007, I resolve to allow plants to actually grow in the spots where they are planted. 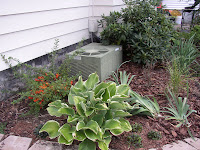 This seems like a no brainer, doesn't it? Isn't the idea to plant things, give them time to grow, and enjoy the beauty as they mature? Somehow, I find it darn near impossible to do, as these pictures show. The first picture is from the fall of 2005, just after I planted and mulched the orange-berried pyracantha.The second picture is from late summer 2006. 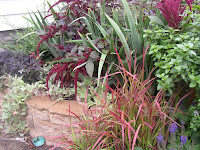 At first glance, I'm not doing too badly--the pyracantha and the iris are still there, right? The 'Chocolate Chip' ajuga, variegated hosta and zebra grass moved to new homes. 'Hopi Red Dye' amaranth, 'Mainacht' salvia, peppermint, Japanese bloodgrass and a few types of sweet potato vines entered the picture. (I should confess that the SPVs took the place of some cerinthe and 'Detroit Dark Red' beets that had departed of their own accord by August.) 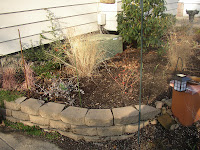 Now check out this picture of the same spot, taken this week. Only the pyracantha--which is being trained against the wall--and the rhododendron are still in the same places right now. Various other types of ornamental grasses, some groundcover sedums that I would like to see cover the wall, a blueberry, garlic, goatsbeard, and several other plants have joined them.

Oh, and remember that variegated hosta in the first picture? It was split into 3 plants earlier this summer, with each of those 3 plants being moved individually several times as well. Two of them are no longer residents of my garden at all. Shameful.


In 2007, I resolve to finish one project before I allow myself to begin another.

Ah, who am I trying to kid. Scroll down to my Gallery of Shame post from June 13th and look at those unfinished projects. Of the ones listed, I have only completed #4--and I added a few more unfinished garden projects later in the year as well. This is one resolution that is never going to come to fruition... but a girl can dream, right? 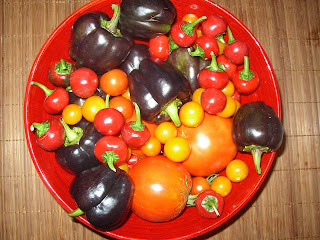 This one actually has a chance of happening. I ate all of the peppers I grew last year, but there were not nearly so many in 2006 as you see here in a picture from 2005. I failed to harvest even half of the cherry tomatoes this year, the dog ate more beans out of the garden than I did, and not enough of my zucchini was transformed into bread before it went bad.

This year, I am planning better. Less green beans, more peas and yellow squash so I have more variety. More plum tomatoes so I am more inclined to put them up as sauce or salsa--and basil, for the same reason.

You know, now that I have a blog I just may be more accountable about things like New Year's Resolutions. After all, when I sit down to write my resolutions for 2008 I will probably revisit this post to see how far I've come. Maybe I'll even have finished the projects in my Gallery of Shame!
Posted by Unknown at 4:00 PM

Good resolutions, we are goin' hold you to them! Happy New Year.

But Kim, if you followed these resolutions, your blog posts wouldn't be half as much fun!

In a small space we have to keep the plants hopping or we'll get bored:)

I totally move my plants around too. Almost everything gets tried out in 2-3 different places before finding a home. Poor plants.

In 2007, I resolve to finish one project before I allow myself to begin another.

You can't do this!  Projects need time to ferment.  I'm ALL ABOUT simultaneous projects.  Especially in the garden!  You pull something from THERE to straighten THAT patch out, and then realize that it could go HERE in THIS patch... but you have to redo it too.

These are all good ones, Kim! I completely understand where you're coming from with #1. My plants rarely stay where I initially put them, and division is just too much fun!

Some women try a new lipstick shade for a change, and others move their plants. To each her own, eh? :-)

Hey I agree with clerk...if you have several projects going at once, then you can work on whichever inspires you at any given time-combats boredom, and little by little they all get done.

My plan is, to buy no new plants, because there is no place free.

I share your resolution about preserving more of my garden's bounty.

2007 will be the year that I actually find some time to use my dehydrator on my chili peppers and tomatoes.

No honest, I'm going to get to it.

Great resolutions! By the way, what kind are the dark peppers you have in your photo? Are they purple or chocolate-colored? I have seen both in catalogs. I'm curious to know if you liked them, flavor-wise. They look great!

Christa, I am 99.9% sure that those were 'Purple Beauty' bell peppers and that I got the seeds from Seeds of Change: http://www.seedsofchange.com/garden_center/product_details.asp?item_no=S14552
They were not as thick-walled as the SOC site says--although admittedly I have only grown them one year so far--but had a really good taste. They were a little on the sweeter side but still with a crisp flavor. I often ate them out of hand while wondering around the garden, and they turn mostly green when cooked.

Clerk, you should be able to put in a veggie garden at the new house this year, no? That would give you a chance to enjoy the bounty and keep you from making rash decisions on the rest of the gardens. I like the fermenting process myself, too... :)

Anthony, that's brilliant! I am going to scour garage sales this spring and summer to look for a dehydrator.

Sigrun, that is a good idea, but I don't think that I could do it. You could always add some containers... or replace a worse performer... see, I am trying to enable you!

Lisa, I somehow KNEW you would agree with Clerk, Miss Projects! *grin*

Colleen, great point! I never was a fan of lipstick. lol.

Chuck, I feel bad for mine, too. And I wonder how big and lush some of them would be--not to mention how many blueberries I would be enjoying right now--if I could just leave them alone.

Annie you're so right about that. I have no singing talent to fall back upon, so I'd be in trouble! :)

Carol, yikes... maybe I shouldn't have put them in print! lol.

Thanks for the tip about the Purple Beauty bell peppers. I order some seeds from Seeds of Change yesterday. I hope I can get them to grow as well as yours did! :-)