My boss at work was nice enough to bring in a 6-in-1 device that she had at home... and luckily my storage chip fit into the longest, thinnest slot! So here are the last of the photos from the old digital camera, may she RIP: 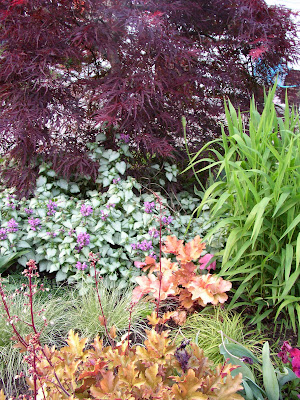 Japanese maple underplanted with 'Purple Dragon' lamium in the front yard.
Supporting cast includes Northern Sea Oats, a 'Peach Melba' heuchera that I got for free in the fall and meant to move this spring, 'Amber Waves' heuchera, 'Frosted Curls' and 'Beatlemania' carexes, red-flowering pansies and tulip foliage. 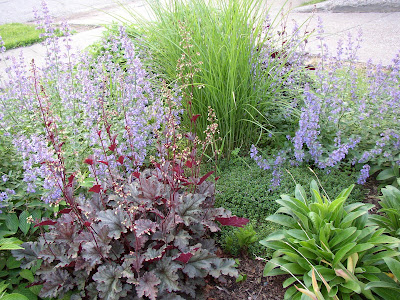 Succession planning, of sorts: As the miscanthus starts to get bigger in the spring, the purple-flowering catmint needs to be cut back anyway for rebloom.
Supporting cast: An inherited heuchera that is sturdy enough to shrug off a sunny, dry Western exposure, a low-growing cultivar of lemon thyme, and digitalis parviflora foliage rosettes. 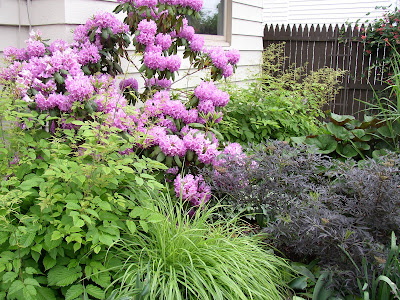 More succession planning: I hate the messy look of goatsbeard foliage (on either side of the rhododendron) after it blooms out, so I cut the whole plant back and top dress it with compost to make up for the shock. It responds by putting out a lower mound of new foliage, which gives the switchgrass in the front (and 'Hillside Black Beauty' bugbane, out of sight in the back of the photo) room to grow.
Supporting cast, from the fence forward: lonicera sempervirens, 'Othello' ligularia and zebra grass, 'Black Lace' (sambucus) elderberry, tulip foliage. 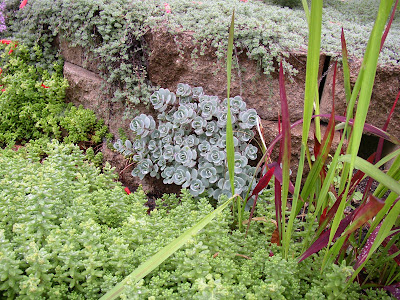 One of the other "wall pockets," where the woolly thyme was cut back to better show off the sedum cauticola 'Lidakense.'
Supporting cast: Japanese bloodgrass, sedum album 'Chubby Fingers' 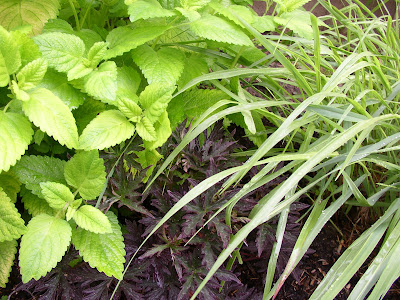 This one makes me wish I had a camera... so I could show you a current photo of this area, too! The 'Midnight Reiter' geranium in the middle is absolutely covered in blooms now, and the golden lemon balm has been cut back for a harvest (and to prevent reseeding) which really shows off the dark-leaf geranium.
Supporting cast: The 'Sioux Blue' sorghastrum nutans (sorghum grass, or Indian grass) is already a lot taller, and I've planted a bunch of 'Cocktail Vodka' red-leaf, red-flowered geraniums at its feet. Nearby are some 'Lime Rickey' heuchera, two currant bushes, lovage, and a dark-leaf canna. The whole effect is a bright, tropical look that is deceptively made up of tough (okay, except for the geranium!) plants.

I have to admit that I was overwhelmed by the sweetness of everyone's comments on my last post--I feel very lucky that such wonderful people visit my little gardening blog! I believe that I am going to take my brother up on his offer to "permanently borrow" his old digital camera (he and his wife got a really nice, high quality digital when they got married two years ago, so he doesn't really need it) and I will see them this weekend. So I could be "back in business" here as early as next week... I hope to be posting again regularly then!
Posted by Unknown at 11:37 AM

Hello! I just wanted to pipe up and say how lovely your textures are. My gardens are still in their infancy so there's not so many interesting things going on... but howdy from another Great Laker up in Niagara Falls, NY! :) I hope you get a new camera soon.

It's so weird that this post & your last one turned up at the same time on my feed reader. I'm sorry about your camera troubles, and I hope the permanently borrowed one will work out for you. I'm looking forward to seeing a photo of 'Midnight Reiter' in full bloom with the Lemon Balm. I almost picked up that Geranium last week, but I didn't have enough cash with me for it.

Like MMD both your posts popped up just today. I'm sorry about the camera also. I love how your wall pockets have worked out...I may have to try that since I have the same "stone" walls edging my veggie bed.

Worth waiting for, these. I'm a real fan of succession planting. Yours are super.

Love your planting combinations...am I sounding like a broken record.. I say that every time, but, it's so darned true! Love the geranium and if I could cram one more plant into the Sunny Susan's strip it would be Midnight Reiter (now I'm humming an Allman Brother's song). I am so sorry about your camera. gail

Everything looks so pretty!

I'm glad you'll soon be back in business with your permanently borrowed camera.

I ordered 'Midnight Reiter' last spring, but unfortunately it didn't come back. I'm hoping it's only dormant this year and will be back next year - that has happened with a startling amount of frequency in my garden. I doubt it in this case, but I'm still hoping!

hi there, i found your blog from a comment on hayfield house. great plant combos! i have some woolly thyme growing in containers until i figured out what to do with it, love the combo with the sedum...great inspiration, thanks!

Wow, sorry to hear about your camera! I'm glad you're getting a replacement, I'd really miss the pictures of all your cool plantings!

I appreciate your explanation of your plant combinations!
I have lemon balm in pest proportions, and it was a good 'mind shift' to see it as a positive addition to the garden, for a change !

Thanks, Amy Greenan. :) As you can probably tell by all of my many comments, I was excited to find your blog via this comment--and I beg to differ re: "not so many interesting things going on" in your gardens, infancy or otherwise!

Mr McGregor's Daughter, that IS weird. I wonder if it has something to do with the fact that shortly after posting the last one, I had to edit it to fix a typo... and changed my site feed accordingly so that people wouldn't see the same post show up twice? Hmm.

In any case, the 'Midnight Reiter' is amazing--my first try with it didn't go so well, but these guys were clearance plants that were almost dead from drought and neglect... go figure that they would work out well! :)

Leslie, I think that you could probably put some thyme in there to fit your theme, since the walls are around your veggie bed. (Lemon thyme is awesome on chicken & fish... I always suggest that at the garden center where I work.) The Overachivers have hens & chicks in thiers, and didn't really even leave much in the way of pocket for them, either!

NellJean, welcome--and thank you! I'm becoming a real fan of succession planting, too. Especially because my yard is so small that I need the extra space to grow everything that I want to grow, lol!

Gail, I'm laughing because... I feel like that when I comment on your blog, too! *grin* And thanks for putting the Allman Brothers song in my head--I had (of all things, don't ask) an Air Supply song stuck in my head this morning before reading your comment!

Greenbow Lisa, oh, I'm going to positively POUNCE on the camera once I get to my brother's! And I'll probably try to take some photos of his plants, and the Overachievers' gardens, while I'm there. :)

garden girl, I had bad luck with my first (and maybe my second?) 'Midnight Reiter'... they kind of melted away toward the end of summer, and never came back the year after. So maybe it's just a fussy plant to get started... but I definitely hope it's just following your garden's strange "year to sleep" pattern instead of being gone forever! Because it's a really pretty plant.

Cindy, thanks! (Nan's blog is great, isn't it?) I look forward to checking out your blog, too--and seeing what you do with that woolly thyme. I've seen it used lots of different ways (between stepping stones, etc.) and it's just so cute that it always looks good. :)

Lisa, thank you... and I hope that you feel better (and that your temps warm up, sheesh!) soon!

Muum, I'm glad that you said that--I sometimes wonder if I overexplain things. :) I'm keeping an eye on the golden lemon balm, but Nan at Hayefield says that it's containable at her place and a bit less vigorous than the green, so I'm keeping my fingers crossed. It has very clear boundaries! lol.

I don't know how you can stand being without a camera! I use mine every single day and would be lost without it. Glad that you'll be getting one to use soon so you can get back to business posting gorgeous photos from your garden.

I just purchased a 'Black Lace' Sambucus and am really not sure where to put it. It's rather tall and lanky, and I'm thinking I need to prune it, but I'm not sure about that, either. Advice?

Did you get my response to your message about the t-shirt? I can't remember if it was on here, or on my blog (in the comments), or on Facebook! Anyway, size Small would work! :-)

Also, I still have the Abutilon that I started last year for you. It's doing well, and wants to go to its new home!