While chatting with my baby brother Jeff (one half of The Overachievers) on the phone tonight, the subject of blueberries came up. His didn't get flowers or berries this year, and he wanted me to explain why... I think only so he could mention AGAIN that he thought it was completely unfair of me to tell him to de-flower his blueberry last year and forego the berries!

I told him that I have read this in several different places, that you should let the plant put its energy into making roots instead of berries for at least the first year, and that it has always seemed to work well for me. What I didn't tell him is that a few sources even suggest doing this to your highbush blueberries until they're at least 36 inches tall. (Waiting just ONE year was already asking a lot of him, I know!)

To prove to him that I practice what I preach, here are the few flowers on my dwarf peach that escaped my notice this spring until they were past the bud stage and in full bloom: 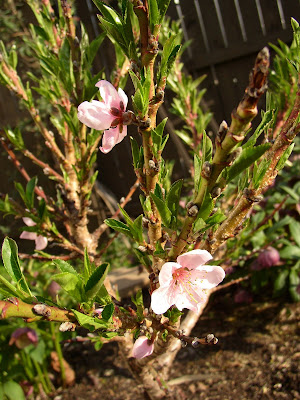 These were pinched off shortly after this photo was taken, and if he stops and thinks about it, he will know that I am telling the truth about this. After all, if I actually had baby peaches in my garden, I would definitely be rubbing it in and sending photos around to all of the family in anticipation of my first peach harvest! But... that fun will have to wait until next year. :)

By the way, while looking for the peach tree photo, I came across this interesting picture: 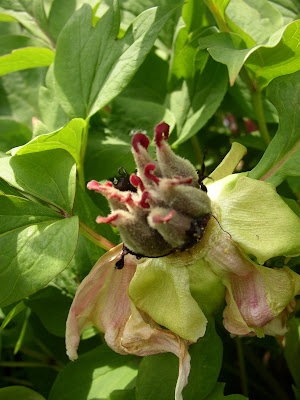 It's the spent flowerhead/growing seedpot from my tree peony! I love how the fuzzy pods flare out and curl over at the end. They look kind of like a jester's hat.

Speaking of funny guys, I'll get to see 3 of them this weekend. Tomorrow I'm heading down to The Apartment Dwellers' place to spend the night with Craig and Jen and meet their new puppy, Maggie. And then on Sunday morning the four of us are heading to Dayton for a baptism. (The Overachievers had a baby this spring! I'm now Aunt Blackswampgirl! ;)

This will be the first time I've seen "Baby Evan" since the weekend after his birth, so I'm very excited. He doesn't count as one of the funny guys (yet!) though--the other 2 funny guys are his father, Jeff, and our father, Rick. Both of my grandmothers will be there, too, and they'll both be meeting my boyfriend Steve for the first time. Add in getting to see what my brothers and sisters in law have been up to in their gardens... and it should be a fun and interesting weekend! We shall see. :)

I threw the whole pinch off the strawberry blossoms and let the roots develop thing out the window. I'm not so good at the delayed gratification concept. But even if I don't get any berries, the plants are stilly pretty!

Heather, I don't think that it applies to strawberries... just to bush/shrub/woody types of berry and fruit plants! So, no worries. :)

I'm not so sure...I was instructed by several unnamed bloggers to pluck off all the blossoms on my newly planted strawberries...although in the end I couldn't do it. Have a really fun weekend Kim!

I didn't know that either...that will be why I had few berries on one of my fruit bushes this year...

Hope you are having fun this weekend with your family :)

I have an aunt whose family runs a large farm in southern Virginia - and as part of their farm, they also have pick your own blueberries and strawberries. I learned from them recently that blueberries often cycle with respect to berry production, with everything third year being a 'bumper' crop - followed by a year with few berries then a year with more. I've definitely observed that on my plants. I never removed the flowers during their first year - so can't comment on that, although it does make sense.

I love those tree peony seedheads, And then there is a peony that Tracy Sabato Aust recommends where the seedhead is so cool you actually grow it for that. It's woodland peony, p. obovata.

I pinched the flowers off my blueberries this year for the exact reason you stated. So now we are still attending the U-pick blueberry farm, but in a couple of years we won't be dependent on them any more!