We are What We Eat?

Among my email subscriptions is a little newsletter from Kitchen Gardeners International, which is a 501c3 organization based in Maine. Through programs like their ambitious Eat the View campaign, they advocate growing and eating your own food. (I am obviously a big proponent of this as well, as you might be able to tell by this first photo of garlic shoots coming up in my garden this week.) 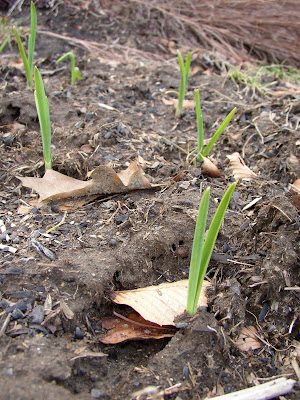 What I like about KGI--and their newsletter--is that it's a nice combination of idealism and practicality. On their site, they include thoughtful moral arguments for eating locally alongside forum posts about how to construct raised beds, which tomato varieties are best, the basics of seed saving, etc. I think that they would approve of edibles used in the garden in an ornamental way, like my black elderberry underplanted with silver sage, as well: 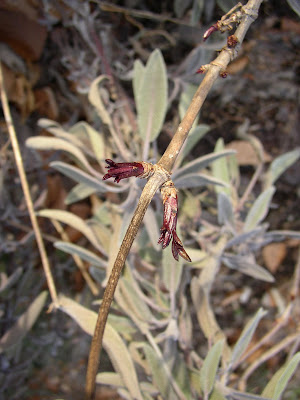 On the practical side, last week's main newsletter article (from a forum post by Roger Doiron) about the Economics of Home Gardening really got me thinking. Here's an excerpt:

"Has anyone ever kept track of what their garden produced in a given year and the calculated the economic value of their harvest? My wife and I did this year and calculated that the net economic value (not the health, environmental, gastronomic, psychological, or social value) was roughly $2150. Here's the data:"

(Note: I took the liberty of shortening this little spreadsheet for purposes of posting it here... hence the fade-to-white area where I cut out the middle. You can see the whole thing on the original post if you'd like.)
Realistically speaking, there is really NO WAY that I would ever be able to come up with a spreadsheet like the one Roger and his wife Jacqueline did. For one thing, I'm simply not disciplined enough... I never managed to maintain a proper garden journal before I started the blog, for example. (For another example of my lack of discipline, look behind the rosette of new foliage on my 'Hab Gray' sedum, below... that's a cabbage AND a kohlrabi that I never cleaned up in the fall. Sheesh!) 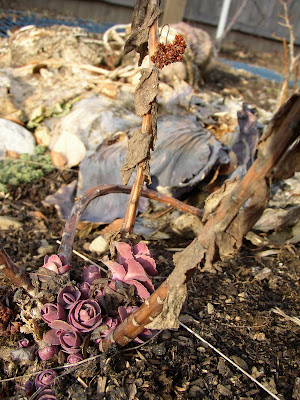 For another thing, the thought of having to weigh and catalog every little thing that my garden produces kind of chafes at my inner hedonist. It just seems wrong to have to bring a handful of blackberries inside to weigh and record them before I can eat them. Seems that time would be better spent enjoying the way each sun-warmed berry kind of burst into flavor on my tongue as I wander around the yard... especially since the blackberry is in the far corner of the yard, next to the 'Bing' cherry and new grape arbor: 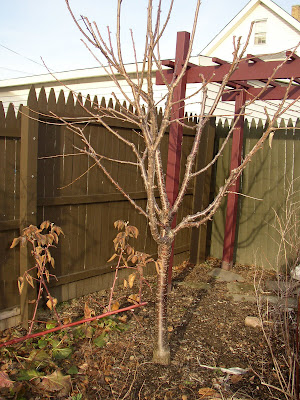 Also, I know that Roger included some caveats about what he was not measuring with his spreadsheet, but my concerns go beyond that. I really would struggle with the scientific-ness (is that even a word?! lol) of comparing the "value" of my garden tomatoes to those you can buy at the store. I'm not talking about the difference in quality, taste and selection, either... I'm talking about the fact that I simply would NOT buy watery, flavorless grocery store tomatoes at all, so it seems unfair to compare what I spent on my tomato seeds to the cost of something I wouldn't even purchase.

But... I really like that Roger did the number crunching, and that it's getting people talking! So next time, can we see a newsletter about growing edibles and ornamentals together? I mean... I can't be the only crazy girl who is growing her garlic under a generous dressing of compost, birdseed (oops--the feeder is above) and red sedum, can I? 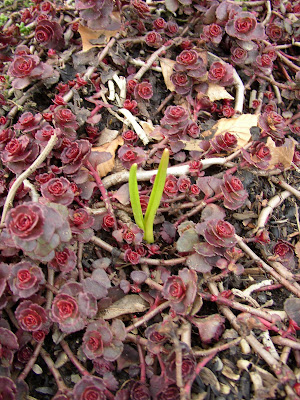 And if other people knew that a veggie garden could be this decorative, maybe they would plant a few more rows... A girl can hope, right?! :)
Posted by Unknown at 11:45 PM 28 comments:

Things are still a little crazy/busy in my life right now... but it's hard to believe that I have only managed ONE post for all of 2009. So I thought I'd take you for a quick walk through my garden today, since the warm temperatures and recent rains have melted even the most persistent patches of snow. There are quite a few small things to see--along with one big, potentially garden-altering development!

First, the small things. I discovered my first "spring" flower this week, a tiny snowdrop that is fighting to unfurl its petals against a backdrop of 'Chocolate Chip' ajuga, bleached miscanthus blades and seedheads, and other garden detrius: 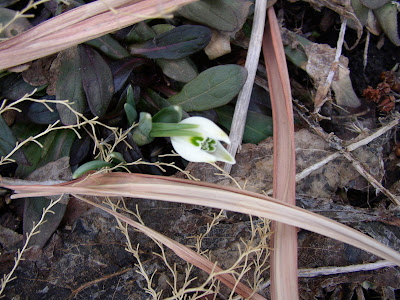 All of the hellebores show buds barely poking out above the ground now, but the foliage on my beloved 'Ivory Prince' has held up the best through our rough winter: 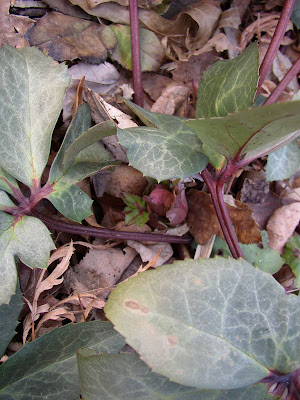 Sometimes I think that my garden knows that autumn is my favorite season, because it keeps giving me fallish combinations to enjoy throughout the year. Here, a red sedum and caramel-colored beech leaves tumble over a black accent rock: 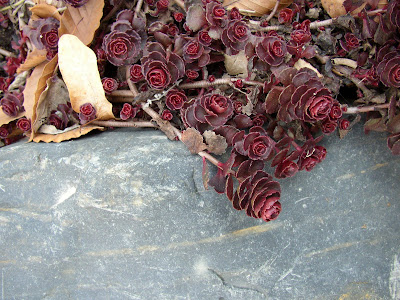 I know it's still late winter, not early spring, because orange pyracantha berries remain. Generally, the pyracantha is de-berried sometime in the spring by a hungry bird. Pyracantha berries must not be anyone's "food of choice" since they last so long in my yard, but I certainly enjoy the pop of orange they provide: 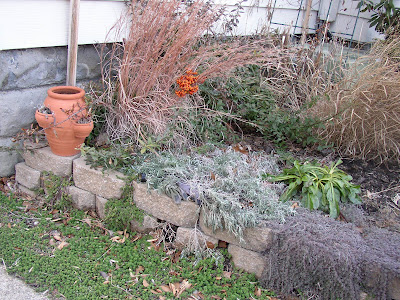 (By the way, observant readers might notice my garden gloves partially buried beneath the grey creeping germander. I had good intentions to use gloves at one point this summer, but quickly abandoned that idea and left them on the top of that retaining wall. I liked that the plant tried to take them over, so I left them there.)

One nice thing about winter is that I tend to pay more attention to the little details that would probably escape my notice at other times of the year. This picture below looks like just a mess of bleached stems and fallen leaves... but after I first noticed the ghostly grey cascades of oregano flower seedheads, I can't stop looking at their simple elegance as I walk up the steps: 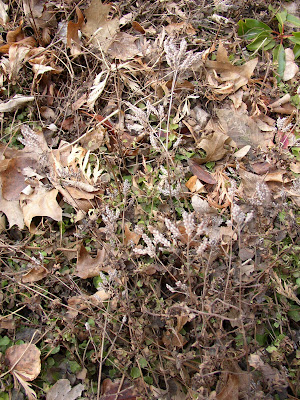 Sometimes I have relied on serendipity to give me good color/combinations in the garden, but other "luck" has been quite deliberately cultivated. Here, I had actually thought about how nice the spotted leaves of these species tulips will look against a background of red sedum, when they finally emerge: 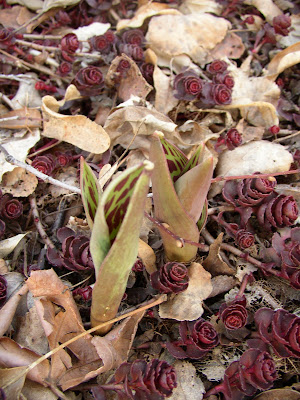 Growing tulips and other spring flowers through colorful groundcovers is definitely something I enjoy. It gives the groundcovers a chance to shine as part of a main attraction instead of just being a flat "ground" to rest the eye. Here you see more species tulips working their way through a spread of 'Chubby Fingers' sedum: 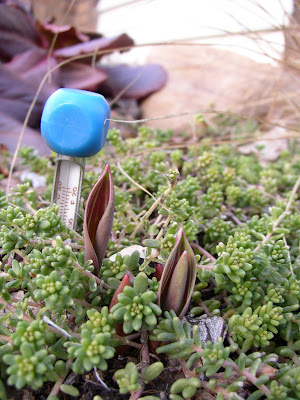 (Of course I couldn't resist pulling out my dirt thermometer after taking this photo--I left it in for scale. And for the record, it was 32 degrees in that patch of soil yesterday!)

Another succulent that has been catching my eye recently is one that lives inside for the winter. This vignette of cascading succulent, crown of thorns plant, and trashpicked old end table--with its fun rustic chipped-stain/paint finish and awesome metal pulls--makes me smile every time I reach the top of my main staircase: 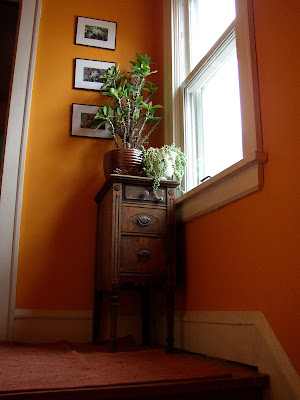 Speaking of, I really need to go sweep those stairs, and get a few other things done today... but first, I need to share the big, potentially garden-altering news. After two years of emails and phone calls, the city has finally cut down the half-dead tree from my treelawn. Here's the view just after they took down the rest of the trunk--they'll be coming back shortly to grind out the stump: 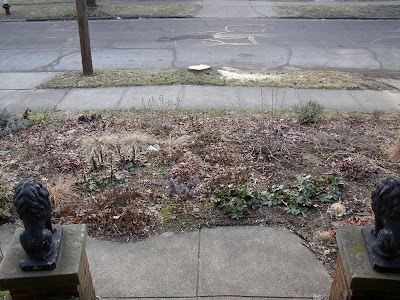 I'm happy about this development, because it was a basswood tree and dropped branches like crazy, even before half of the tree started to die. (The slow death happened around the same time I started digging up the front yard for a garden... no coincidence, I'm sure!) But I'm also a little worried, because it did provide some shade for my West-facing, mostly xeric, front yard garden.

I'm pretty sure that this will be the death knell for the already-stressed doublefile viburnum that I love but don't really want to baby as much as I already do... it will need to be replaced with something much more tolerant of dry, hot exposures. The Spanish foxgloves, which have been low-maintenance in this garden so far, may also be a little stressed by the change... but hopefully all of the rest of the plants will be just fine. I'm not worried about things like pennisetum, miscanthus, caryopteris, sages, echinops and other plants with hardy constitutions.

We'll see how they all make it through this next year, and whether they finally get measurably larger here in year 3. If they perform as expected, I should be seeing much more of the kind of winter interest that I had planned to see in this front yard garden, in 2010!
Posted by Unknown at 5:46 PM 21 comments: