Tonight was relatively warm and the wind was surprisingly still. My head was too full of thoughts in that way that only physical activity can alleviate, so after a quick supper I ventured outside to rake leaves.

Coco quickly settled into her favorite front yard spot to survey the other goings-on in the neighborhood. There was a surprising amount of activity on the street for after dark: Random comings and goings, dogs being walked, and an impromptu game of keep-away with a football down the street. It briefly occurred to me that I would like to have a digital camera that takes better pictures at night, to better chronicle the easy feeling of such an evening in photograph form.

The fallen leaves of the Japanese maple carpeted the ground below its gnarled branches and spotted the thyme plants with crimson and red. I left them in place as I worked my way around the rest of the plants... meticulously cleaning around things like lavender and sage that hate winter moisture but giving other plants just a quick once-over with the rake.

Between an unnamed heuchera and a golden sage, my rake got stuck momentarily. I heard my voice say, "What the...?" at the same time my brain thought, "Uh oh... that's the butterfly weed!" My arms stopped pulling and I bent over to more gently untangle the tines and make sure I hadn't pulled the plant out.

That's when the light caught it: A seedpod, impaled on a tine, with white silky threads bursting out of its seam. I had stalked all of the butterfly weeds, which I winter sowed this spring, but recently gave up on being able to harvest any seeds from them. I figured that I was just lucky they all had bloomed in their first year. I carefully picked up all the seedstuffs that I could find, and deposited them safely inside before resuming my task.

It was such a lovely night that I went back out after my work was finished and tried to get a few shots with my digital camera anyway. None of them turned out--my hand is simply not steady enough to overcome the camera's shortcoming--but I did find a second pleasant surprise when I went to download the pictures: 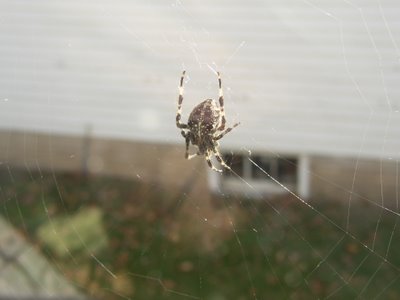 Almost a week ago, we caught site of the spider fixing his web in the afternoon sun. It would be the last work he would do on it, as a lack of food and continuing cold temperatures were the end of him before the weekend... but it provided the first and only good picture I was able to get of him. You can see his markings and even make out that he was minus one arm on his right side, if you click to enlarge the shot.

I'm not exactly sad that he is dead--not because I'm cold hearted, but just because that is the natural cycle of life. The optimist in me appreciates fall's endings even as I collect seeds and envision the new beginnings that await in the spring. Luckily, I have a long Cleveland winter's worth of time to make a few decisions about next year's growing season. I will need that long to decide whether it would be completely silly for me to take that storm window off again next summer, just to see if we can attract another spider to observe... and whether even that would stop me from doing it anyway.
Posted by Unknown at 8:27 PM

Okay Kim---I could be hormonal, but I have to tell you that I started to tear up a little reading this. The complete tenderness and love you have for your garden, and the living things in it is obvious in this entry. I know I feel the same way about my own garden.

Thank you for posting this. It was an absolute joy to read!

I hope another spider comes to your window next year.There is a joy observing nature close up and can make good photos.My phone camera is good in twilight but rubbish in the dark.I would have taken a lot of moon photos if i had a camera of capable of taking night pics!I hope you can regrow the butterfly weed.Im just off to google the name as im not familiar with it.Garden suprises are great.Forgotten flowers, seedpods, and serendipity plants (like my purple petunia from last year, and the Sedum? from this year).
You have a great love of the garden and it shows.A poetic soul blackswamp girl :)

Thank you for the warm words, Colleen and David... I usually try not to ramble on and type out my general musings, but there's something about this time of the year that seems to encourage it.

Colleen, maybe you you just caught my mood! (Not that I am having particularly bad or sad thoughts... just heavy ones.)

Snappy, I would love to get some good moon shots, too. :) And I absolutely should have put in the Latin name, because there are tons of "butterfly weed"s--I try to be good about that, but I missed this one. I was talking about asclepias tuberosa, which stays low and flowers in a range of colors from yellows to reds. Mine are the species, which are bright orange.

I'm so glad you did decide to 'ramble on and type out (your) general musings', Kim! This was very touching, indeed.
May those happily-discovered seeds bring you bright new butterfly weed blooms next year.

I enjoyed this post, your evening in the garden sounded so relaxing, if with physical effort involved.

Did you name your spider?

Ah, sounds like you need a tripod! And I assume you've checked your camera to see if it has a program or setting for night shots? And if it's only darkness that's the problem (not camera shake) you can always try the "fill light" feature in Picasa.

Okay, the photography nut will retreat back to her own little world now....

Carol, I'm glad that you enjoyed the post. You know, I actually never named him out loud but always thought of "him" as "Fenn" because he was in the window. ("Defenestrate"=throwing someone/thing out of a window, and that was always one of my favorite weird verbs.) That said, it was probably a female spider anyway because it was rather large.

Karen, I actually used the night setting, to no avail. That took decent picures, but lightened up everything in the shadows--I wanted to be able to convey both the shadows and the spots of light. Don't retreat... any further ideas (outside of a new camera, lol) would be appreciated!

You're not alone...my camera takes lousey low light pics too (as you can see by my indoor worm bin posts)...but I have an "antique" Epson from 1998, it doesn't even have flash as an option! I do have an old Olympus SLR 35mm, and have taken good moon shots-you do need a tripod to steady for best results, but the surprising thing is that the exposure is a fairly fast one-the moon does emit lots of light (even if the sky is dark). I plan to get a new camera with my tax check....can't wait!

Sad to hear the eulogy of your spider Kim, though it is great to hear that it was nature that brought around its demise.

Sounds like evenings in your street are quite communal.

a poetic evocation of a mood we all experience. whatever you call it, this particular mood allowed perceptions and an expression that touched me. many of us were able to recognize the beauty of those moments through your words.

Your spider is cool...I have one on my kitchen window, but refuse to blog about it lest someone see my dirty windows! I was amazed to see mine still moving after several below-freezing days. I wonder if they can survive freezing solid...some frogs can...