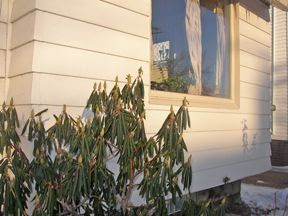 Okay, I admit it. The title of this post was a geeky attempt at bad botany humor. As I observed my poor cold rhodie do its best impersonation of a needled evergreen, the words Rhododendron Pinifolius popped into my head. I giggled at the thought of making a tongue-in-cheek post to describe the rare pineleaf rhododendron, only observed on special days in the coldest of winters... yes, I'm sure that the cold was getting to me!

It amazes me that plants have such great coping mechanisms. It looks unhappy, but what the rhodie is doing is curling its leaves to keep the moisture from leaving through tiny vents in the undersides. It was -1 degree outside when I took all of these pictures yesterday morning. This morning I got up at the same time but was greeted by -4 degrees instead. I couldn't tell if the rhodie leaves were more tightly curled this morning or if I was just expecting them to be, though. 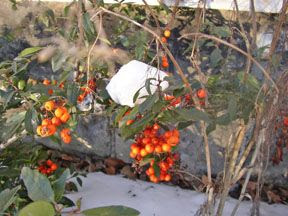 I don't really mind the cold itself, even if you factor in the wind chill. The big downside is that the pipes in my upstairs bathroom tend to freeze when it's below 12 degrees unless I leave my sink faucet drip. Friday night I discovered the hard way that when temps drop below 5 degrees, the sink doesn't quite move enough water to prevent the pipe freeze.

The pipes thawed on Saturday, but I have since had to leave the bathtub faucet drip as well to ensure the pipes don't freeze again and burst. My February heating bill is going to be bad, and my water bill is not going to be a whole lot of fun, either. I'm so appalled at being forced to waste so much water that I am already saving to tear down a few plaster walls this spring (where certain plumbing pipes reside) and replace them with insulation and drywall. Obviously I will not be going out for a steak dinner any time soon. 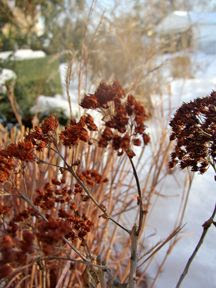 On the bright side, I've been able to drink in a lot of beauty to help sustain me through the frigid cold. With brittle sunny skies and the lovely crunch of snow underfoot, NE Ohio has never looked more beautiful to me as it does this winter.

It may just be my imagination but the cold seems to tinge the snow and even the air with a slightly blue hue, which makes orange pyracantha berries, the deep rose of papery sedum flowerheads, and even the slightly pink hue of dried little bluestem blades glow like the jewels of the winter garden.
Posted by Unknown at 7:26 PM

Kim, thanks for the wonderful description of a cold Ohio winter. I have good memories of winter there, having grown up nearby, and your post brings back vividly some of the sounds and sights I remember. On the other hand, I have to admit I've become a weather wimp...I'm cold just thinking about it!

Those leaves look like Rhododendron Pitiful-folius to me! It's hard to believe they can come back after that cold.

Although I'm not fond of Pyracantha's thorns - the berries look great in your Ohio Winter garden.

Yeah, having to use water to keep pipes running stinks. In the summer you dole it out when the plants really need it, then have to let it run at a time when you can't even channel it out the window to the garden.

Kim, we too have to let the sink in the upstairs bathroom run at a trickle to prevent freezing. It was -6° here this morning, but they say it's going to break later. A few flurries have begun falling, so that 'it's too cold to snow' theory goes out the window today.

I love the snow too...even the cold temps. I wanted to get more outdoor pics like yours, but the wind was so awful up here, that I wimped out. Hope your rhode makes it okay!

I put buckets in the sinks to catch the drips and stockpile to water houseplants or to water animals with. Then I don't feel so bad. I hope this cold snap goes away soon. This is not fun.

Leslie, the crunch of the snow is something that I had forgotten myself. Thanks for stopping by.

Annie, pitiful-folius is right! I so wish I would have thought of that. :) I haven't had many run-ins with the pyracantha yet, but it's still young.

Kylee, you're so right. So much for it being "too cold to snow!" It's coming down now, and I'm hoping that the cloud cover keeps the temps above zero tonight. I'm glad to hear that it's supposed to break for you soon, because we generally get your weather 2-1/2 hours later!

Lisa, we had terrible wind on Saturday, too. I hope that all of your plants made it through this cold snap okay.

Meresy_g, I did fill up a couple of 10-gallon buckets but I have nothing more to fill. :( I agree that this cold snap is no fun, and I hope it ends soon.

Here is an article on Rhododendron hardiness.