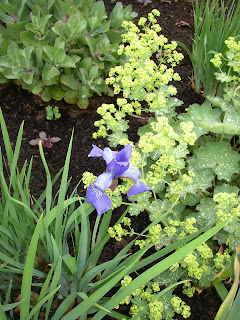 This afternoon, the sun emerged after a brief rain so I decided to go out and take a few pictures in the yard. I focused first on the lovely combination of dark blue Siberian iris and acid-green alchemilla mollis, then started to work my way back toward the newly opened peony blooms.

While trying to catch some good backlighting on several baptisia, I noticed that a bird had flown by awfully close. It was a blue jay, and it came back for another pass--actually mussing up my hair this time--just as my boyfriend pulled into the driveway. The first near-miss was obviously not a mistake.

I hurried back toward an apparently more "neutral" area of the yard as he got out of the car and explained what was going on. "I'm getting dive bombed by a blue jay! Do you see anything back here? A nest, anything?" I asked.

Neither of us could pick out anything that looked out of place. "Well, let's see if it happens again. Watch your feet," he cautioned as we cautiously moved toward the back of the lot again.

Sure enough, the dive bombing resumed as soon as I got to the end of the baptisia bed. Brian commented that there were actually TWO blue jays diving at me, which explained how they were coming back around so quickly. I was watching my feet as directed when I saw something small and grey plop onto the unmulched ground from the lowest branch of the espaliered pear. "Look, there's a baby!" 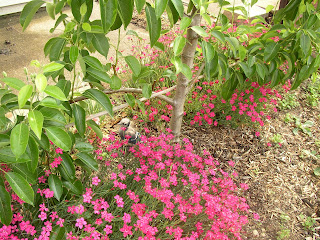 I didn't want to stress the new parents or the little one out any more than I already had, and I certainly had had enough of their protective campaign... but I couldn't resist taking a minute to snap a photo before I scooted out of there. If you click the picture to enlarge it, you can see the baby to the left of the tree trunk, just behind the first clump of dianthus.

We watched from a safe distance as the baby hopped off, stretching his wings under the watchful eyes of the parents. Since they had successfully protected their baby from the big scary human interlopers, they were now free to scavenge more food. We watched them feed the baby a few times as it hopped along, but didn't get to see it actually fly...

Speaking of flying, it's past the time we had wanted to get on the road ourselves. We are heading down to OU to see my wonderful sister-in-law graduate from medical school. (Congratulations, Amanda!) It seems to be a weekend of new beginnings all around. I hope that all of my fellow gardeners make a few fun discoveries out in their own gardens this weekend!
Posted by Unknown at 5:12 PM

I thought of Alfred Hitchcock's movie "The Birds" when I read this. Those birds aren't afraid to protect their young one!

So in one post you've made me want an espaliered pear, a lady's mantle and a baby bluejay... the bird is the most likely to become a reality.

Have a wonderful trip, Kim!

Cool. I've never seen a baby one, but we have lots of Blue Jays here. I wonder what kind of nests they build?

I'd never seen a baby blue jay either, though I see a few adults in the garden now and then. It's very cute. I hope it makes it.

I saw a bird dive-bomb one of the cats the other day. Undoubtedly, the cat got a little too close to the nest!

OU is in such a pretty part of the state. Congrats to Amanda!

Thanks for that story about the blue jays Kim. Aren't they very brave to bomb dive us humans, to protect their babies? And what a cute little baby it is too, very fluffy. :-)

Your espalier pear tree is looking good, I have an espalier plum tree that I planted last year and it is bearing fruit!!! Not a lot, but it's a start. :-)

Have a wonderful weekend!

I had a Hummingbird do that to me one time. It was so close I was trying to swat it. I think it was just letting me know it could poke my eyes out if it wanted to. One rewarding thing about having a garden, for me, is all the bird families you get to watch grow.

The baby bluejay is adorable. My daughter rescued one once and we've been attrated to them ever since, even though they have a bad reputation of being egg thieves.

One of my cats sneaks out the back door every chance he gets, he does not stray far so I just keep an eye on him, the other day he came flying past me with 3 grackles in hot pursuit! It made my day :).

Blue Jays are aggressive birds - but the other day I almost got hit by a blue jay being chased by a robin! I don't know what that blue jay did to deserve the wrath, but that was some impressive wrath!

I love your espaliered pear. That's even fun to say!

Kim,
I don't have jays dive bombing me but there is a young family of wrens nesting in the eaves of the front door porch and I'm always conscious of disturbing them.

Fewer pears on my espalier pear this year than last and I'm wondering is it because I've a climbing rose trailing through it for the first time.Or else there wasn't long enough for good pollination to occur.

What a cute little guy! Such big eyes. He almost looks like a cartoon character. I don't think we have jays nesting with us this year, although I have seen them in the yard on occasion. Great find and glad you didn't sustain any lasting damage.

The best things in life really are free! I've never seen a baby blue jay before but I suppose they all start that way. Nice shot.

Funny, I've never seen a baby jay, either! The parents must keep them where they belong most of the time...sure hope he makes it. Have fun on your trip, and remember to take it easy on those college beer bongs! ;-)

Superb photo of that dear little baby jay! I like their spunkiness in dive-bombing us to protect their young!

Come on a visit to read all about Chris Beardshaw's Chelsea garden...or look at our ponds at Barleycorn on my garden photo blog:)

Enjoyed sharing your day. A blue jay dive-bombed my husband, years ago as a child, and he's still scarred! Don't you love Lady's Mantle covered with early morning dew? Think I erased a comment from you by mistake. Sorry!

Kelly, doing an espalier isn't too hard. This one was an experiment because I got a great deal on two broken pear trees ($10) at the garden center where I worked in '04. I have since learned the "right" way (google "Modified Lorette System" for details) and am using that on my apple trees!

Annie, I would have thought that the ladies' mantle would have been the best bet. Too hot for them down in Austin, even in the shade?

Xris, that's a good question. Now that I'm back in town, I may have to do some research!

Pam, I hope he does too. Many cats around in an urban neighborhood... but the feisty parents will at least give the baby a fighting chance, I'm sure!

Kylee, your cats probably caught on quicker than I did. I can't believe I thought it was a "mistake" instead of a "dive bomb" at first! Duh.

YE, you're giving me ideas. I have two apples that are newer espaliers and am considering a peach. But a plum... hmmm... :)

digital flower pictures, I love that part, too. It makes me feel more connected with nature in my little urban garden to interact with all of the small creatures.

marie, thanks for stopping by my blog! Blue Jays are supposed to be mean, too, but I have liked them ever since I "rescued" one that was trapped inside my screened-in porch at the old house. I finally got it to land on a broom--twice!--while I talked to it very soothingly. The second time, it actually made it out the door.

iowa gardening woman, lol! I'm still giggling... that story made my day, too. I wonder what he did to those grackles?!

Sylvana, that would have been interesting to see... the robins in my yard are so mild-mannered that I can't even imagine...! :)

John, did you get a late cold spell there like we did in the states? I think that did in my pear this year. I am actually considering taking this one out because its mate got snapped off by a wayward neighborhood boy sneaking through the yard. And frankly I am low on space and may replace it with something else. (I would be more amused at growing an espaliered peach than a pear, because you can already find locally grown pears here.)

meresy_g, it's been a baby bird encounter week all around, hasn't it?! :)

layanee, I had never seen one before, either. I was surprised at how soft and grey he was... very cute. Not what I expected, as blue jays are very pretty birds, but "cute" isn't a word that comes to mind with them. (Especially when they're grabbing at my hair, lol.)

lisa, I'm thinking that they do keep the babies where they're supposed to be most of the time... really, I couldn't believe that this one was still doing the hopping/flying just a few feet thing. He was so big!

Wildlife Gardener, it was a serendipity photo... if that hadn't turned out so well, I didn't have a backup shot. lol. (Oooh... pictures of Chelsea? I'll be right over!!!)

Joey, I don't blame your husband. I at least knew what was going on--and deserved the second round, since I went back to investigate! I can imagine that as a child, I would have been terrified. (And a little hurt!)

And yes, the lady's mantle is terrific. Covered in dew, sporting raindrops, used in arrangements... I am surprised at how much I love that stuff!

Hi Kim - loved hearing about the bluejay and seeing your pear tree. That is cool! I would love to see a pic of the baptisia too.

It sounds as if the weekend was going to be a fun one!

btw - I've linked to your blog in my gardening links.

What a cute baby bird! Yes, that blue and green shades combo is quite refreshing.

That is such cute little bird! We don't have bluejays here very much- but we have red wing blackbirds which are territorial like that.

I love your garden and all the wonderful photos you take of it.