While watching all of the annuals arrive at the garden center this spring, I kept thinking about my dark black urn. Last year it was a gift of sorts for my boyfriend--the modern man and abstract painter who still maintains a deep love of classical architecture and landscape elements. This year, I wanted to place the urn next to the side door and fill it with deep, rich colors to add some interest to that beige-door-on-beige-siding entrance.

I knew that I wanted to use 'Black Knight,' one of the dwarf cannas that Brian had bought me at the home and garden show, as the "thriller" element in the pot. And I love 'Silver Falls' dichondra so much that I wanted to use that as the "spiller." But it's a big pot, so I obviously needed a few "fillers" as well. After much debate, I settled on a combination of the rose-and-gold 'Royal Glissade' coleus, bronze carex flagellifera, and the lovely green-and purple 'Gage's Shadow' perilla. 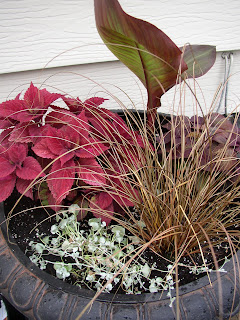 This first picture shows the pot soon after the initial planting. That's not actually 'Black Knight' in the back, however. As per Murphy's Law of Gardening #3456, the only dud out of the 5 canna tubers that I planted was the one for which I had plans... so another dwarf canna with colorful foliage, 'Ingeborg,' was tapped instead.

A few weeks after planting, I noticed that 'Royal Glissade' was staying rather rosy instead of developing some of the pineapple-yellow streaks that I had counted on. So to lighten up the middle of the pot, I tucked in a tall curry plant. (The taller variety is a greenish silver, unlike the whiter silver of the dwarf curry, so it didn't detract from the dichondra.)

That was better, but... well, but still not good enough. I couldn't help but feel that the pot was just one more plant away from being a full, lush knockout. So last week I asked the designer who creates our custom plant arrangements at the garden center for his opinion. I explained that the bare canna stem was bothering me a bit and I wondered what might round out the arrangement.

He suggested I add some golden creeping jenny for a little pizzaz. I had used up my at-home supply of lysimachia nummularia 'aurea' and we had just put our 4 inch annual pots on sale, so I bought one before I left that day. I brought the pot home and plopped it right down on top of the dichondra while I went inside to rinse out my coffee mug. 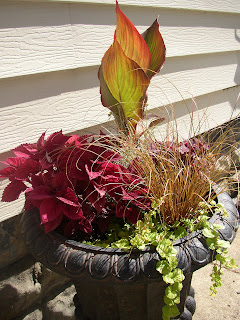 When I came back outside, I discovered that Danny was absolutely right about how the creeping jenny would wake up the whole combination. In fact, I liked the creeping jenny there so much that I promptly evicted the dichondra and placed the creeping jenny front and center. I threaded the longest stems back through the center of the pot to give them a head start on filling in the canna area--and I may get two more tall curry plants to flank the canna stem, too, since herbs are so cheap.

Between the creeping jenny and the alchemilla mollis, I think that acid-bright is my color theme of the summer... but that doesn't mean I have completely fallen out of love with the 'Silver Falls' dichondra. After hearing of the use of kidneyweed as a groundcover in more temperate areas, I decided to plant it in the front garden. If it takes off and starts to fill in around the purple sage, bergenia, heucheras, and grasses as nicely as I imagine it will in my mind's eye, then I won't feel nearly so bad about its "demotion" from the urn pot!
Posted by Unknown at 8:45 PM

Thanks for sharing your thought process - very fun to walk through each step with you! I agree - the creeping jenny really added pizazz to the planting. Very nice - I love those big urns!

The best laid plans ......... We gardeners sometimes have brilliant ideas about colour combinations but they only work if the plants are really what the label says they are. ;-)

The creeping jenny looks wonderful in this combination of plants. A great study in contrasts Kim! :-D

Great job in planting this combination of plants. I also used the brown and chartreuse in my front urns but threw in purple and pink!
It does look stunning I shall post soon to show you. Thank you for sharing your idea.Looks fab. :)NG

Danny was soooo right about the creeping jenny!

Love this post... it's like a mini "Anatomy of the Container" pamphlet. Also love the finished product - very chic.

You've inspired me to go play with the mixed container that I'm not so in love with...

Thanks, Kris! I thought my post was a little wordy, but I always like to know the thought process behind others' garden decisions so I left it all there. :)

Xris, I just posted not too long ago about my flower deficiency! *grin* Actually, the curry has some flower buds... and the canna may bloom, who knows? That might be overkill, though.

yolanda elizabet, that is so true! Funny thing is, the coleus is starting to get the golden streaks now. :)

naturegirl, please do post that! It sounds lovely. I'll have to show you the smaller pot I have on the other side of the door, too. It has 'Red Sensation' cordyline (more of a brown-red), purple flowering verbena, and some purple, merlot and chartreuse colored coleus. I'm not brave enough to try to add pink, though. :)

jane m, thanks for the compliment--and for stopping by.

Christine, wasn't he? I should see him tonight for the first time since then, and I can't wait to show him just how right he was. (I brought my camera with me!)

Briana, I hope that you post pictures of the redone container when you are finished! In the meantime, I have been drooling over those succulent-garden pictures you have in your latest post. Wow. I've been inspired to include a few more succulents in my garden now...

Very nice! I too enjoyed the story of its evolution.

A beautiful combination! Jenny really did liven things up, and the whole pot stands out against the beige. Would love to see photos as it matures.

What timing. I just planted 2 hanging pots and I'm just staring at them like, "something is missing." I chalked it up to me never thinking something is actually "done." Glad to know that even a container can be an evolution of sorts. I may copy and use some creeping jenny too.

The acid is perfect it really lights up the highlights in the canna. Wow you are persistent!!

Thanks for taking us with you as you thought it all out~ that creeping jenny can escape, but I don't want to be without here glowing presence in my containers either!.

My Silver Pony Foot does well in certain very well drained containers where it drapes over the edges like a veil, but a couple of strands landed on the crushed gravel of the patio extensions and it's going nuts there.

Kim... I like how you went back mid-season to add to your container. Too often, I just plant in the spring and then never consider the container again.

I really like the combination of contrasting colour and foliage in your urn. Congratulations on a superb display!

This is the first year I have used the Creeping Jenny in containers and I am real happy with it. I have been using it as a groundcover and it is great for that (a little invasive but easily dealt with). This is first year it has profusely flowered and it really is an amazing splash of gold/yellow.

great colour combinations. Just looking at the photo is so pleasing, all I can say is: aaaah!

Kim: I really love this pot - you did a great job!

Also, I've tagged you for a meme - 7 random things about yourself. Go to my post to learn more:

I love the way that creepy jenny looks and think that 'pot' growing is just perfect for it ;-)

Bev, I definitely will keep posting pictures as it matures. You got me thinking now--I should show you the whole wall in one pic so you can see how it really stands out!

rosemarie, now that you mention that I think that I ought to take another look at my hanging baskets. (And I'm bad about thinking that nothing is ever done, too! *grin*)

me, thanks for stopping by! I went to visit you as well and am enjoying the heck out of your photography skills...

annie, welcome back! I am hoping that my pony's foot roots all around wherever it lands, too. But it's an annual here, so I don't have to worry about it taking over for more than just this season.

Carol, I admit to ignoring them most of the time, too. But this one is right by the door and I walk past it almost every day so it's been bugging me! :)

digital flower pictures, I'm starting to experiment with leaving some of the jenny in the ground as well. It's not going too crazy this year, but then it's been a dry spring/summer so I don't know if it will start to take off if/when it gets a bit more normal in terms of rainfall or not...

kati, I'm glad to hear you say that--I've been saying that a lot lately when looking at your wonderful pictures. :)

tracy, thank you. I don't think that I could live up to your meme list, though. Very well said!

ottawa gardener, I do like the way it drapes over the edge of the pot for sure!