Gardening With Birds and Dogs 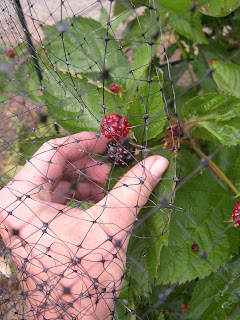 After a second year in which I did not get nearly as many blueberries as I knew were produced in my garden, I decided that certain measures needed to be taken. As my blackberries began to mature, I put up some fruit netting to foil birds, chipmunks, neighbor kids, and all other manner of fruit-stealing varmints. The netting is easy for me to get up and under, but it's going to be heck to remove from the shrub later--I was in too much of a hurry to build a proper frame for it, which would have made removal much easier.

Right now, though, that's the furthest thing from my mind. This morning, I harvested my first ripe blackberry! Well, okay, so it was almost ripe--not quite as sweet as it would have been had I waited until it was ready for me, but I was certainly ready for it. (For the record, the first two actual ripe blackberries went to the little girls next door this evening. Fruit netting does not help protect the harvest from a softy gardener.)

A less combative coexisting-with-animals story can be found in my front garden. When we're in the front yard I hook Coco up to one of the infamous lions with her 6ft. leash. She checks out the new smells and then usually lays down in a spot that allows her to survey the street while I putter. If someone has the audacity to walk down our side of the street, or if Another Dog appears within sight of the house at all, Coco must immediately jump up and investigate. Her front paws generally land within a 3ft by 18in semicircle as she barks a few times, then strains to get her nose close enough to the interloper to get a good sniff. As you can imagine, this semicircle is a tough place for any plant to live. 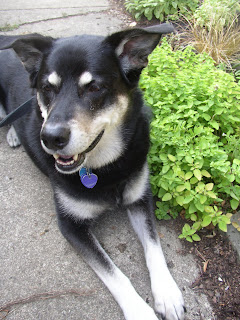 Coco has been trained pretty well in terms of staying out of the rest of the garden--except when she steals tomatoes and beans to eat--but frankly I don't mind her letting people know she's here with one or two barks. I don't want to hook her up to anything else, either. If I put her up on the porch, she'd be out of range of the occasional ear scratch or tummy rub as I walk past... where's the fun in that?!

So I took a flat rock from the backyard and placed it in the part of the semicircle where she tends to land most often. Then I dug out several chunks from the golden oregano that I've been using as groundcover in other parts of this bed, and used it to fill in the rest of the area. Golden oregano seems to spread in a rather mannerly way for me in this western exposure, and its bright acid yellow spring color gives way to a nice fresh chartreuse in the summer.

The golden oregano is working out wonderfully there, as it has now spread to fill in its little area and easily handles the occasionally trampling by my 90lb. dog. As a bonus, when she does crush a few leaves underfoot the lemony smell of golden oregano perfumes the air.

And if a parade of dogs should happen to march down our street, and cause her to completely ruin the clump? Well, I have more to dig up and replace it--but if I didn't, then it would cost me all of $2 at my local garden center to buy another pot of golden oregano next spring. And I get to have my gardening assistant at my side while I mess about in the front yard. In my mind, you can't beat that deal any way you look at it.

As I write this post, I can't help but think that I should be taking a look at using more herbs--maybe in more unconventional ways--in my garden. They're already go-to plants for me in many situations, but I'm sure that there are other design and decorative uses that I have yet to dream up. If you're reading this and you have used herbs in particularly imaginative ways, please share! I would love a few more ideas... especially if they could relieve me of having to deal with fruit netting. (I know. Pipe dream there. But it's a lovely thought, isn't it?!)
Posted by Unknown at 10:31 AM

Another great read :) Loved all the trouble you go to to have your beloved dog near you while you work. He looks gorgeous, full of beans :)

That Coco is a cutie! Our Brix is only 9 months old now, so he's certainly not garden-ready. I'm looking forward to the day when I can garden with a canine companion, too.

No unusual ideas for herbs, although next spring I plan to divide up a bunch of thyme I have (I think it's lemon thyme) and use it between some stepping stones. I like what you've done with the golden oregano - I'll have to use some of that, too.

Great idea for a tough spot! My only use for herbs is thyme around my stepping stones...I know, ho-hum. But I agree-herbs should enjoy more useage in the garden, especially the good-smelling ones!

Nothing creative with herbs here. I have an area that is herb-rich, but they are scattered throughout the rest of the garden, too.

We've got a 65-pound plant crusher at our house. Simba has a couple of spots where she likes to lay when Romie lets her loose and she KNOWS I don't like her there. All I have to do is say her name in a stern manner and she gets up and leaves. One spot is where I used to have a hosta and I've given up on that one.

In general, she's pretty good about staying out of things, though.

I netted a plum tree to keep the birds out but they found a way to get in. After having to remove a couple of birds caught in the netting and as you anticipated it is a PITA to remove the netting I decided that it wasn't worth the effort. Funny about blueberries. Now the birds seem to leave the berries alone. I've harvested small amounts of berries for the past two weeks. I guess there must be another source of food that's more to their liking. Good luck with the blackberries. We just had some in a mixed fruit tart, raspberries, peaches, pineapple, strawberries, grapes, blueberries in a cream custard filling. Delish.

I love your garden assistant, especially since he's leashed to the lions. Just read your lion post from January. That was a good read!

Having a garden helper who lets out the odd bark is wonderful. Mine spends most of his time snoozing, but wakes every now and then to wander over and see what I'm up to. His favourite thing is to nudge me when I'm crouching over and knock me over. He has the angle down perfectly.

what a delightful read about how you garden with your canine buddy. I'm always pleased to find others who welcome their dogs in their gardens.

The only different or creative idea for planting herbs that comes to mind is from my dear (deceased) mom. She used an old shoe or boot filled with a soil/sand mixture. Because most herbs originate from areas with well drained soil, the idea is that the boot or shoe doesn't retain too much moisture. It also looks great with the lush growth spilling out the ankle of the shoe/boot.