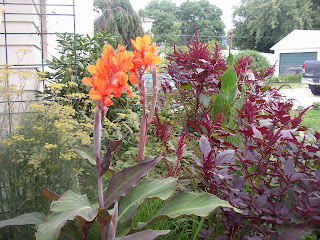 I wasn't quite sure what to expect from my garden in August. All gardens seem to look great in June and into July--and I love mine in September, when it starts to show the beginnings of fall color--but August seems like a rather tough time of the year. Many perennials have finished blooming, annuals are getting scraggly and need to be cut back, and plants in general always look a little worse for the wear in our typical August heat and humidity. 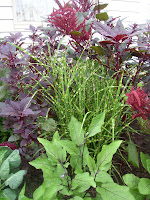 Maybe that's why I love my 'Hopi Red Dye' amaranth so much. This stuff looks good all season long, with just the occasional hard chop. That it pairs just as nicely with the cool purple of Russian sage as it does with the warm oranges and reds of canna lilies doesn't hurt, either. In the second picture you can see the amaranth on either side of the lemony-striped Miscanthus (either 'Zebrinus' or 'Strictus,' my aunt and uncle didn't keep the tag) and the purple-tinged foliage of the 'Ichiban' eggplant. I think I'll cut it back a bit more, though, since it's looming a little ominously over the zebra grass! 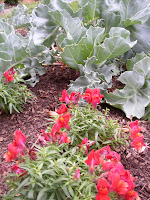 Similarly, I appreciate the carefree nature of snapdragons. These annuals sometimes overwinter for me, and I really like the taller varieties, but this year the only reds I could find at the garden center were short. I think that next year I'm going to start some old-fashioned ones from seed--and for this, I blame Elizabeth.

I like my red snaps next to the glaucous leaves of sea kale, and in another part of the garden I have some snuggling up between blue-tinged hellebores with red veins, and golden oregano. The latter looks more chartreuse than golden at this point of the summer, but it still compliments the yellow throat on these snaps in a good way. 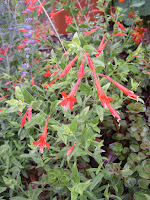 I have read several times (but first in a Tracy diSabato-Aust book) that one should keep the entire color spectrum in mind when placing plants together. The idea is that you get the most pleasing effect when colors from the far end are a darker shade than those at the near end. I believe that Tracy's example was that apricot goes well with dark blue but dark orange doesn't go so well with light blue.

She would not like my snapdragon and sea kale combo above, nor would she like the 'Orange Carpet' zauschneria garettii (aka hardy or California fuchsia) cozying up to the Russian sage here, but I do! I understand the concept and agree with it for the most part... but I also wholeheartedly believe in bending the "design rules" when it makes you happy. 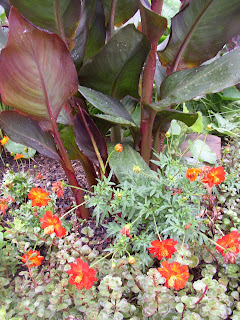 I do NOT always like it when plants decide to bend design rules for me, as is the case with the orange cosmos and dark-leaf canna here. The cosmos was supposed to be a little bit taller, and the canna was supposed to stay a little more dwarf. Instead, there is quite a large visual step down between the two.

I guess that I have been the recipient of many happy accidents in the garden, however, so I can't complain too much. And my orange cosmos does look nice between the canna and the 'Fuldaglut' sedum spurium that has spread nicely at the edge of the bed. (Kylee... click the picture to enlarge. Do these cosmos look like your marigolds or what?) 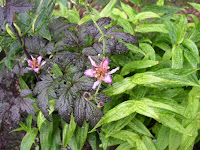 Shade is at a premium in my garden, especially since the neighbor limbed up his beautiful beech tree last week, but there are a few interesting things blooming in the more light-challenged areas. Here, one toad lily bloom jumps in front of the dark foliage of 'Hillside Black Beauty' cimicifuga/actaea and the gold-flecked foliage of a different toad lily. Both toad lilies are still in their nursery pots, as I am "trying them out" here next to the bugbane... but I think this is a fun combination, especially with the shiny European ginger at their feet and a large 'Frances Williams' hosta next door. 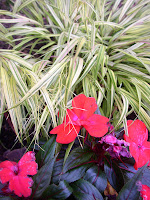 I have decided that New Guinea impatiens are probably too fussy for me to bother with next year unless I keep them in pots where they will be easier to remember to water. That said, I love the dark foliage on these (Something-Cherry is the name) and they look great next to hakonechloa macra 'aureola.' The variegated Japanese forest grass is sprouting its own airy inflourescences, and the blooms on the New Guineas help pick up the beginnings of the pink fall tinge on the grass blades.

Overall, I would have to say that I was pleasantly surprised to see so much in bloom here in August.... especially since foliage, not flowers, always seems to carry my garden. Here's the rest of today's lists: 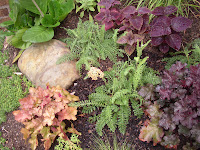 *Edited to add the pennisetums in bloom and change the subject to the CORRECT month--thanks, Chuck! Can you all tell I'm feeling like the summer is getting away from me here?! :)
Posted by Unknown at 7:50 AM

Looks good, tho'!!! Lots of summer interest in your garden, and I'm not reading any bittiness either. :)

I truly believe that gardening is like art - personal preference! There is some fabulous artistic talent that I hate! And stuff that I love that few others would give wall space to.

Yes, ma'am, those cosmos do indeed look like my 'marigolds.' Had you noticed that I corrected things in that post? ;-) How about this - instead of saying they're marigolds that look like cosmos, I say they're cosmos that have foliage that looks like marigolds! Got it covered now. LOL

kylee, I hadn't noticed--I thought that we still had a mystery on our hands, frankly. I don't know if I mentioned this before, but my orange cosmos had a generic "Cosmos" tag in them that showed pink flowers. So it could have gone either way, or we both could have been surprised with a completely new plant for all I knew. (Annuals are so not my forte...) Good to know it's solved, so I know what to look for again next year... call them whatever-leaf whatevers, I really like these little guys. :)

Kim: What great combos! I love that amaranth and it does go well with all of those colors! Even cannas skirt is pretty!

What a nice list! And your Hakonechloa blooms too? I need to give mine a good talking to.

You have a lot of flowers for someone who concentrates on foliage, Kim - and a lot of plants in general! It's looking pretty wonderful, whether Tracy d'A would approve or not. The cosmos with the sedum are a treat around the Canna.. it looks a little like a teacher with a class of adorable kindergarteners.

Entangled, well... let's just say I use the term "flowering" lightly in regards to that hakonechloa! They are very airy and are kind of held low--yours might be blooming, but shyly hiding them from you below the blades.

Annie, you're going to make me like the placement of those cosmos and cannas yet! A teacher with a class of adorable kindergarteners... I love that. :)

I think I've gotta grow some of the Hopi Red dye Amaranthus. That is cool ... I also love the dark colours of the bugbane. Those are such cool plants. I like the look of the toad lilies just beside the bugbane ...your canna has beautiful foliage.

Yes but the colors play between the cannas and the cosmos is lovely...

Such a great selection of plants and flowers in this late season. Since you like the maroon amaranth, you should try some purple shiso Perilla but beware that it readily sets millions of seeds. I love your blog because I get to see interesting plants I haven't seen before like the 'Orange Carpet' and orange cosmos. I don't know how you manage to have such a variety in a fairly small space. I hope you post a picture of the 'Sambor' geranium as I'm thinking of buying it next year.

Your garden(s) looks beautiful - I can't believe that your toad lilies are in bloom, I have (most likely) until the end of September to see mine. They're always one of my favorites. Ichiban is a beautiful eggplant I think, in fact most of them have interesting foliage (and flowers and fruit) - and they generally love the heat, so nice addition! I need to look into those amaranths - a friend from gradute school used to grow all sorts of them, and I've always loved them. Yours looks beautiful!

Everything looks beautiful, as usual :-) I think Annie's description of your cannas and cosmos is perfect, and I do like the way the colors play off eachother.

Hopi Red Dye was one of my wintersowing losses, unfortunately. I will absolutely try again next year after seeing how spectacular yours are. I think they would go perfectly in my front yard, which needs some color badly at this time of year!

Kate, thank you! Drop me an email at blackswampgirl AT yahoo DOT com and I'll send you some seeds. I definitely have enough of these to share.

ki, I'll have to see if I have a picture of 'Samobor' from this spring when it was covered in blooms--that will be much better than the sporadic ones I have now. I would think of it as a good "filler" plant in terms of placement, as the leaves have a nice dark center to them as well. I really like mine.

pam, these toad lilies are straight from the nursery... so they're "cheating" blooms! I have a regular old green-leaf variety that is nowhere near blooming yet. As for the Amaranth, I really like this one and the golden 'Hot Biscuits,' too. If you want some seeds of these 'Hopi Red Dye' see my note to Kate above. :)

Colleen, thank you for the compliments! Weird that the amaranths were WS losses for you... hmm. That said, I can get them to reseed like crazy here, but I tried direct sowing them at the old house for two years in a row with no luck. Go figure!

Can't always expect a lot to be in bloom in August, but your garden looks lovely.

I am eagerly anticipating the first blooming of my Cimicifuga/Actaea 'Black Negligee.' I've had 'Hillside Black Beauty' 2 years longer & it has yet to bloom. Let me know what it looks like!

I've been thinking of planting some amaranth, and now you have convinced me to put it on my wish list for next year. And...you aren't the only one who has Orange Carpet snuggled up to Russian Sage. I love the combo! Also, always enjoy reading your blog.

What a nice Bloom Day you had! I like your combos, and isn't that the point-create what YOU enjoy! All that foliage is so colorful, you scarcely NEED blooms!