A Homerun, A Bloop Single, and A Total Whiff

It's September, and my favorite American League team is determined to lose themselves right out of the playoffs. My favorite National League team has had a less than stellar year with a few strange highlights. Air Force parachuters recently dropped onto the field with a ball that had been given to them on Opening Day and carried halfway around the world. Upon landing, they presented the well-traveled ball to the club's manager... the same guy who broke the record this season for most career ejections. (The latter really surprised me, because his ejections aren't generally as colorful as some so I never realized he'd gotten the boot that much.) 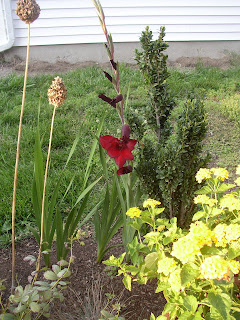 So as the pennant race heats up and the gardening season cools down, baseball analogies are on my mind. As I was doing some plant cleanup this evening and thinking about how much I miss hearing the legendary Ernie Harwell on the radio, a bright ember in the back garden caught my eye. Turning my head, I discovered the first lovely 'Espresso' gladiolus bloom.

Aptly named, this beauty is a very rich color... by the time I ran inside and grabbed the camera, the sun had moved on to light up the nearby lantana instead and 'Espresso' had lost its glow. But the color is still very eye-catching, even set against the ugly, patchy grass whose days are numbered. It's a definite homerun, and even though I've had glads overwinter in the ground before I'm not going to take that chance with 'Espresso.' These babies will be dug up and stored in the basement until next spring. 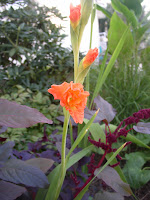 In contrast, the promised "deep orange" of another pack of glads failed to impress. Deep orange? More like orange sherbet or a disgusting creamsicle with a yellow center. Ick, ick, ick.

But I don't quite hate it enough to pull it out... unlike a different glad whose blooming tenure here was extremely short-lived. Purportedly flowering in a lime green color, it shot up to a height neither of these two managed to reach and then promptly flopped over. "That isn't terrible," I told myself. "At least the flowers will stand out against the 'Voodoo' red sedum below."

Well, stand out they did. These glads bloomed in the most godawful shade of yellow-green I have ever seen in my life! Picture that greyish yellow-green of a boiled egg yolk, and then up the wattage to flourescent and you've got the color. I'm adventurous, but this was well beyond the line into unquestionably questionable. I couldn't even bring myself to take a picture before I ripped those out.

So I'm 1-for-3 in terms of glads in the garden this year... *sigh* I think I'll just cheer myself up by reminding myself that some baseball players get bonus money for hitting my .333 average!
Posted by Unknown at 7:02 PM

you could still hear ernie every night in the garden. he has an awesome audiobook out now. i could listen to his voice forever.makes me feel like a kid again

Kim, I'm sorry, I've been hexing the Tigers so my Yanks could hold onto the wildcard. Maybe the Red Sox will implode and the Tigers could pass them by? It's a weird season in this neck of the woods, both baseball and garden.

I would have loved to have seen the yellowish-green glad. I usually like green flowers.

The 'Espresso' looks like a very nice red ...very rich and elegant and not just bright and scary! It's too bad about the green one though..I'm intrigued by green flowers although I don't have any. The orange one is very orange:) sort of NIMGish for me!

anonymous, really? (Brief pause as I went to search Amazon.com) Huh... the '68 Tigers Season on audio CD. My Mom would LOVE that--she's a big fan of Al Kaline. (Me, I played shortstop as a kid so I wanted to be Alan Trammel.) Thanks for letting me know!

If only he would put his "60 Years" book on audio, that would be wonderful. :)

Heather, now I know who to blame! ;) Unfortunately, it seems to be my Tigers who are doing the imploding, not the BoSox. *sigh*

Carol, I probably should have taken at least one picture, I know. I usually like green flowers, too, but these... *shudder*!

Leslie, I know--very NIMG, too, and unlike you I like orange! *grin* I don't hate it enough to pull it right now when the garden is winding down, but I definitely won't leave them in the ground just in case they decide to come back.

The "Espresso" looks pretty enough to make up for the other two!! What a gorgeous, rich color.

The Espresso is gorgeous...but the other one - yeah - more peachy than orange...I like orange too but I agree the peachy is a bit...mmmm.....nauseating.

I didn't know you were a Tigers fan! I agree with you....the Tigs are definitely imploding. It's so frustrating, especially after making it to the World Series last year. Although, I kinda think that surprised everyone.

'Espresso' is lovely, and I'm with you on the orange one---it does remind me of a creamsicle. The second you compared the color of your green one to hard boiled egg yolks, I totally understood why you yanked it out. I would have done the same :-)

The 'Espresso' is gorgeous, but like Carol, I also think the green glad sounds interesting. Somehow I'm picturing it as the color of an Osage orange fruit??


Annie at the Transplantable Rose

my sweet peppers at home consistently hit for a rather low average, but they do provide so I don't bench them.

go Phillies! They are on track to make it three years in a row being 1 game out of the playoffs, or with any luck, maybe hit a .333 average.

Sorry your teams aren't doing so hot, but "Espresso" helps to make up for it! I kinda like that funky orange...you could always make a planter of awful pastel flowers for next year, just so you can enjoy destroying them! (Y'know...stress relief...just a thought ;-) I must agree, that green sounds yucky, and I'm glad to hear your results before I bought one!

I planted glads which had the 'Espresso' color on the package. I got scarlet which is a bit...well, not deep, rich and velvety, but bright, gaudy and circus like! LOL and can commiserate!

Glads are something I don't bother growing here because the wind flattens them--but I have a great story about glads for hope on my blog at http://tinyurl.com/2u7q8l. I know you read and commented on it, and I should be able to announce the total of money raised by Murray's garden soon.

Neon boiled egg yolk. Yuck!
I guess if you planted the creamsicle colored glad in a mass planting it may work ... or make you sick. I don't plant glads because they always need to be supported. I don't do supports or at least try not to.