***edited to add Carol's 100% correct diagnosis of my little "problem" to the title of this post. See comments for details. :)

Knowing your shortcomings is important, and I admit that one of mine became apparent while I worked in the yard this week: Having lots of projects "in the works," all of which are only halfway finished. I don't know why I have such a problem with this at home, because I love the feeling of accomplishment that comes along with finishing a project at work. So it goes, I guess.

The most pressing problems involve my failure to provide the necessary structure for certain plants that require it. Remember the Dortmund rose I've been raving about for a year now? My thoughts when I planted it this spring went something like this: "Well, I'm working 70 hrs/week right now at the garden center, so I'll just get this guy in the ground and put up a trellis for him later." 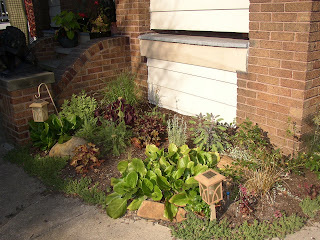 "Later" is a pretty unspecific time, but I'm pretty sure that it has come and gone in any case. Dortmund sprawls through the bronze carex on the corner of my porch, lax and limp instead of upright and thriving. One thing that I failed to consider when placing it was that the rest of the porch post above the brick you see in the picture is a wide, smooth, house-colored expanse where my house numbers reside. I can't cover those, and I really have no other logical and visible place to move them.

The other thick porch post is on the far side of my house, nowhere near the driveway or front door. Not good for porch numbers--and being the northwest side of the porch not great for a climbing rose, either. The two brick pillars that flank the front steps are topped with simple metal posts that don't show up much visually but keep the porch roof from sagging in the middle. Again not good for porch numbers, but possibly workable for a climbing rose support since I don't mind them being completely covered. They would get a bit less sun there, however.

My other option is to leave it where it is and direct most of its canes toward the side of the porch (with a few strays artfully arranged to show the house number) once they reach number-height... I'll probably need to sketch this out to get a visual before I make a decision on which way to go here. (Any thoughts or advice from those who have grown climbing roses? This is a first for me.) 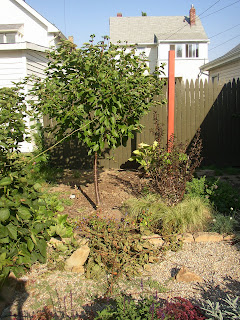 My other pressing project is to finish the grape arbor, so I can stop cutting back the poor grapevine and start harvesting more grapes! I did get one post up and level (with the help of a sledgehammer-wielding boyfriend) but then a thought occurred:

The lot line on the left of this picture will soon be designated by a new fence, and I know that the length of backyard I am fencing is not evenly divisible by the 8ft fence panel size. Maybe it makes more sense to make the arbor fit the leftover odd size (assuming it's close to what I want anyway) than to make the arbor first and fit the fencing around it? It would certainly make for a cleaner look. So I put the rest of that project on hold until the fence goes up.

So the fence needs to go up soon, but I can wait to move the rose until the spring if need be. After seeing these unfinished projects on a post, though, I really want to get going on them already! Ah well... maybe I'll just go out and clean up the trimmed blackberry brambles and weeds that you can see in the Japanese rock garden above. I just noticed that I stopped my trimming to get the first red arbor post in the ground, and never picked up my mess when I was done. (Might I have some form of project or garden ADD?!)
Posted by Unknown at 6:11 PM

I think some times our blog makes ue do it. We see something while working in the garden and say I should get the camera so I can blog that. I have caught myself doing it and then say now what was I doing before I got the camera? ;)

So many jobs, so little time...we are all there on occasion I think.

Sorry to hear you've got a case of GADS. That would drive me nuts. Guess I'm just peculiar that way but I can't start something without finishing it. Got a bad case of "Git'er done. "

I can totally relate. I often find myself saying,
"Wow, is it 'later' already?"

But then everything is okay again when I move my projects to "much later".
:)

Of course I have GADs too...and it's about to get worse because I'm heading out tomorrow on my own On the Road adventure. See blog this evening for further details...;-)

Don't worry, though. You'll get everything done. It always works out.

I'm not sure Kim, but maybe having GADS is not so bad? Finish one part completely and you lose flexibility. The other parts must now relate to the completed part.

Working gradually in several areas may be closer to weaving a basket, going round to each section in turn... as long as you keep the form in mind, you can make changes in the pattern.

I think your idea of making the rose turn the corner and grow up a trellis on the outside of the pillar could work if you wear heavy gloves and use lots of twine! Bending climbing roses to make them grow horizontally sometimes make for more flowers, too.

I love Annie's analogy of weaving a basket, going round and round the garden, turning your attention to one flower bed and then another. I embrace GADS!

Laurie & Chris... I resemble that remark! lol. Yes, I have probably done that a time or two, myself.

Carol, you're so right! And then the next thing you know, you're halfway around the garden, leaving undone projects in your wake. Maybe, as you said the second time around, I just need to learn to embrace my GADS?

Kylee, thanks for stopping by... hope your garage sale is going well and almost finished!

layanee, that's true. Most of this is self-inflicted, though.

chitweed, LOL! I keep thinking "E-GADS!" when I look around my garden now. :) Would we have fundraisers called "Hoe for the Cure?"

Annie, I love that analogy. It's such a beautiful thought! And beyond that, in a practical sense you are entirely correct: there are a few things I would have to either work around or undo and revamp had I actually gotten them done first. That does make me feel a whole lot better.

When I first read your post's title, I laughed - my brother and I also have GADD, but we call it Golf Attention Deficient Disorder. When we play golf (which is rarely for me) - we care about our shots for the first three holes, but after that are commenting on the trees or the birds or the day in general...which our subsequent scores reflect.

Here it is, going into the second week of September, and I just staked a cardinal vine and my hyacinth bean (that was climbing happily all over a large perennial hibiscus). I have roses in the shade that need to be desperately moved, and red raspberries that are crawling everywhere but up. Yep, I'm with you on the GADD.

Heh...I don't know if I like the post or the comments more! I'm with Annie-embrace GADS so things can come together more harmoniously! (Says the girl who just got a half-dozen spring bought plants in the ground YESTERDAY, with a dozen more to go! ;-)

We have a seriously ADD, GAD-- situation at our house, inside & out. My husband & I are both semi-self-employed as artists, and I like to blame the artists temperment-- we have to follow our inspirations, don't we? But if I posted a gallery of our un-finished projects, we could put anyone else's to shame.

We just placed some large stepping stones purchased in-- February, for my birthday--a couple weeks ago, in a seriously abbreviated version of the original plan for them. Only the front of our garage is painted. I could go on...

Sometimes I think the beauty of blogging is that, through selective photography & cropping, you can make it appear as though it really IS the way you'd like it to be...!