Although it wasn't a huge meeting of Texas-like proportions, I just have to boast anyway: I got to meet a fellow garden blogger this morning! (And if that alone wasn't cool enough, she's a fellow Blackswamp Girl, too!) 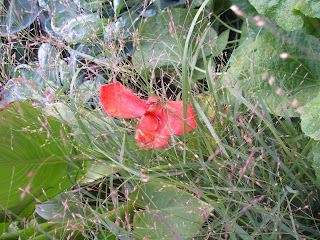 Kylee from Our Little Acre came up to Cleveland yesterday along with her Mom and another Master Gardener from Van Wert. The Van Wert MG's were in town to receive a much-deserved environmental award for their new Smiley Park Children's Garden.

Due to their time/travel constraints and some events going on at my house--namely, fencing lessons being given in my driveway--we decided to meet up at Petitti's Garden Center in Strongsville. I had instructed Kylee and her Mom to visit their Avon store the last time she was in town and they loved it so much that they wanted to see Strongsville as well. Avon is newer, but the Strongsville store bowled me over when it first opened. It was loosely based on large garden centers in Europe, and included a cafe that sold coffee/espresso and real gelato! 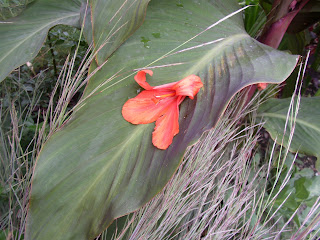 I was pretty sure that I would recognize Kylee immediately when I saw her, and I did--but it took her a second to realize who I was. (I apparently "sound older" on my blog... what a wonderful compliment!) Once we got the identification part out of the way, we slipped quickly into comfortable familiarity. It really was like meeting an old friend.

Kylee and I quickly headed off to do some shopping for ourselves while the other two ladies looked around for items suited to the Children's Garden. (And for themselves, I'm sure--it's hard to be a gardener and resist buying for yourself at a place like Petitti's!) 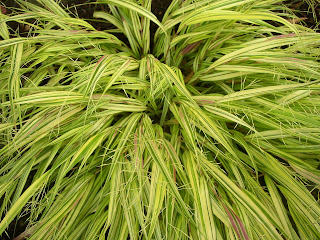 The next hour and a half or so passed by in a blur as we looked through plants and chatted about their performance. Kylee picked up a pot of the lovely hakonechloa macra 'Aureola' and since I was partially responsible for convincing her to buy it, I hope it does well for her!

She also picked up a fuchsia that is supposed to be hardy to Zone 5... it will be interesting to see how that overwinters for her in Zone 5b. (One of the guys who works there said that he planted one in the spring and is similarly hopeful that it is as hardy as reported!)

My haul? Well, I picked up another caryopteris, this one a bit taller than 'Petite Bleu' and meant to be planted behind the 'PB' I bought this week and the one I plan to pick up tomorrow. I also bought some fancy hens-and-chicks (I am extremely susceptible to both colorful foliage and succulents,) a 'Hadspen Blood' astrantia, and (3) 'Blue Ice' amsonia hybrids. It's so hard to find amsonia at all in local garden centers that I couldn't resist 'Blue Ice'... its leaves are a bit wider than those of the taller, more feathery a. hubrechtii that I have coveted, but it's still supposed to have great fall color.

As much fun as we had shopping, though, Kylee and I both agreed that the next visit has to be in one of our own gardens! (Frankly, I'm dying to see her garden--the pictures on her blog are so lovely.) And maybe I'll have some pictures to show for that meeting... but since today's didn't turn out, you're stuck with a shot of the hakonechloa macroa 'Aureola' that I raved about to Kylee, and two pics that I love of some mingling in my own garden. And with that, I bid you a very tired goodnight!
Posted by Unknown at 8:36 PM

Now, inquiring minds want to know....did Kylee bring her monarch chrysalis with her and has it hatched yet? :-)
I too love Hakonechloa m. 'Aureola'; mine is starting to develop a little burgundy colour in its edges, does yours do the same?
Which Fuchsia did Kylee get that is supposed to be hardy? A gardener I know in Greenwood, about 45 miles from here, has overwintered one outdoors--it might have been the Cape Fuchsia, but I forget for sure. If it will overwinter here, Kylee and you ought not have too much problem, especially if you get consistent snow cover.
I'm with you on the foliage and the succulents, as you know--and also with the Astrantia. I can only find one Amsonia around here, and it's A. tabernamontana; so-so fall colour, unlike some of them.
Glad you and Kylee got to meet--I'm jealous, up here in the hinterland by myself :-)

I too wonder about the chrysalis?
Anyway, it is nice to see how internet brings people together.

How cool. It would be fun to go shopping with another gardener like that.

Jodi and verobirdie, I have a feeling that Kylee will be doing a chrysalis update in the very near future so keep your eyes on her blog. *grin* The ladies were heading to another public garden after they left Petitti's, so I bet Kylee needed to catch up on her sleep last night! :)

Jodi, mine does indeed put on some fall color like that. It was tricked into doing so a couple of weeks ago when we dropped down into the 40s overnight, but has since lost a bit of that. I love that coloring on it, too! (And I know what you mean about some amsonias coloring up better than others... it will be interesting to see whether this hybrid really does have the good fall color it says it will.)

Oh goodness, was this ever FUN! And I'm sorry that I won't be answering the question about the monarch here, but I will do that VERY soon on my own blog.

I enjoyed my time with Kim, which I will be blogging about also VERY soon. I had so many photos to go through and I wanted to get those uploaded and edited before I wrote about our adventures.

I've just completed one post from Friday's adventures, with Saturday's to come by noon on Monday.

Oh, and I have a GREAT picture of Kim and myself. I'll be posting that, too. Kim said I could. ;-)

Kim: It is such fun to meet other bloggers! I've only met Kris from Blithewold but it was great and putting a smiling face with a name is always gratifying. Been catching up on posts...love your new 'finds'!

Sounds like you had a great time together. I think meeting at a beautiful garden center would be the perfect place for garden blog buddies to get to know each other. My husband travels in Ohio a lot and I'd love to one day go with him just so I can visit Petitti's.

It is great how the plants + internet can connect people :-D

Good to hear you both had a great day!

Your shopping trip with Kylee sounds like a lot of fun. I'm glad you were able to meet another blogger, Kim. I've really enjoyed the get-togethers we've had in Austin.

Sounds like a great time! I'd love to be able to meet ANY fellow bloggers, but you in particular. (And Chuck, Hank, Snappy, Annie in Austin, Carol, Colleen, Xris....you know!) Perhaps next time I go to Cedar Point in Sandusky I could take a side trip..... :) ! Is that very far away?