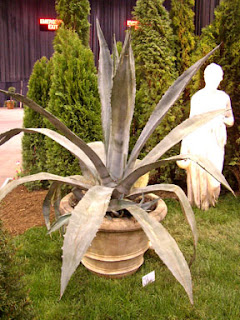 Last year, I was enchanted with the annual Cleveland Home & Garden show, as was evidenced by the fact that it inspired three separate posts in February. This year? Well... let's just say that the show left a whole lot to be desired, with a few shining exceptions.

I have no idea what the price tag might have been on this huge potted agave, but suffice it to say that I was drooling over it. Usually, I would want to see it in a dark pot to show off its pale leaves, but here with a white classical statue in attendance it looks perfect in its washed out terracotta pot. Sadly, this was one of the very few nods toward Italianate style in the gardens on display. 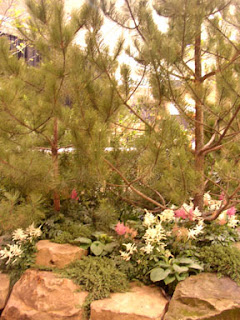 Preview articles in The Plain Dealer hyped up the importation of real Italian cypress trees to fit the theme, "Bella Italia," but in reality the vast majority of the display gardens featured plants familiar to most NE Ohio gardeners: Astilbe, hosta, coralbells, and the like. I could have taken this picture of pine-wooded loveliness at last year's show, and it would have been more believable in an Irish garden (except, of course, that thirsty plants would not really thrive in competition with the roots of pines) but it just doesn't say "Italia" to me!

I found myself searching the gardens for a grapevine--or maybe a pot of lavender or rosemary--and one of those extremely formal layouts that I love to admire, just Not In My Garden. But there were none to be found. It was as if this year's show went out to prove ruthlessly what Rick from Whispering Crane Institute pointed out last year, that these display gardens are meant to sell landscaping, not really to cater to gardeners. 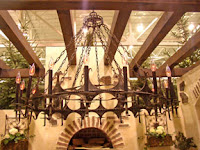 And while I realized the truth of his words, I still longed for something to excite me as a gardener. The hyacinths smelled lovely on a cold winter day, and some of the ironwork was beautiful, too, but none of the display gardens really hooked me. Nothing enticed me to walk up some steps or peer into a "watery gateway to hell" like features in last year's gardens. And judging by the fact that it was a busy day and yet people strolled through the displays quite quickly, I'm guessing that I wasn't the only person, gardener or no, who felt this way. 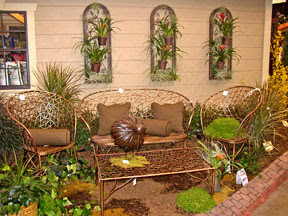 There was one garden, however, that made me stroll through slowly, to better absorb some of the thought that went into it. Petitti Garden Centers put together a wonderful display garden last year, complete with a "moss monster" on an arch, and this year's display was similarly wonderful.

The little vignette here was not very Italian in feel, but it did include some adorable metal garden art, great use of texture, and a fun grouping of bromeliads as living artwork.

Petitti's did give a few nods to the "Bella Italia" theme, however, with large urns, some gorgeous standing columns, and a grape press that was incorporated into one bed. Their piece de resistance, however, IMHO was this wonderful patio. 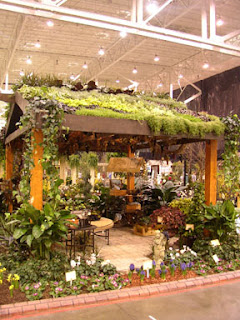 Okay, the patio itself was nothing all that special, but get a load of that gorgeous green roof! It had everything from peperomia to wandering jew. With those houseplants, you know it wasn't hardy enough to be duplicated outside... but I definitely appreciated the sentiment. (And all of the texture!)

But once we left the Petitti garden, we quickly grew tired of the "As Seen On TV" booths and the hawkers who tried to entice us over to test out their gadgets. These annoyances and the letdown of most of the display gardens convinced us to leave the show after just an hour, in fact. So while I won't go so far as to say, "I will never go to the Home & Garden Show again," especially if I continue to luck out and get free tickets... well, let's just say that I won't necessarily be as eager to attend the next one as I was this one. (Unless, of course, my curiosity gets the better of me yet again!)
Posted by Unknown at 11:13 PM

Kim: Just the wonderful smell of mulch and hyacinths could keep me going back to the flower shows! Providence Flower Show starts next week! It is disappointing when you can't find either inspiring plants or intriguing ideas for your own garden! Love the roof though! Tucker says hi and his 10th birthday is on 4-3-08. He is aging. Dogs just don't live long enough do they!

I don't go to the 'Home' shows in Halifax, which include a few tired looking landscaping displays, because I can't stomach all the plastic siding displays and other crap shown. We are involved in a unique show in late April, the Saltscapes Expo, which is like the magazine Saltscapes come to life--not your average trade show, it's so much more. HOpefully we'll get more nurseries and landscapers out to the show as it increases each year (this is year four) because while we have a great venue and turnout, change is hard for those who just automatically go to do the same ol' booths each year at the Home shows. Booorrrrrring! And I too have no time for hawkers of junk gadgets!

I agree that those photos of the Petitti Garden look nice, but they look to me like they'd be more at home in Hawaii than Italy.

I agree that the garden shows can be disappointing, but I wonder if it's because the people attending the shows are getting more sophisticated and (dare I hope) more educated about what's out there and what's possible. Maybe we're setting the bar higher and higher and the shows haven't caught up yet.

Agaves have become very popular around these parts - and I saw one in a gorgeous pot at a nursury recently, it really was stunning. Maybe it'll have to be something to think about for the new house - where I can give it a spot on honor on the new deck somewhere...

(And I agree with you on the green roof - gorgeous!)

Garden shows are so artificial I don't go anymore but I do miss the wonderful smells of blooming flowers and greenery. For some reason the local Smith & Hawken has the same smells tho I can't fathom why since they seem to have fewer and fewer plants. I wonder if they use some kind of spray.

Kim, I'm going to make sure my mom reads your post, because I had asked her to go to this with me the first weekend it was open. She declined. (Too far and bad weather.) She spoke to one of her master gardener friends who went and thought it was great. She was wishing we'd gone. I'm glad you posted this because I always hate missing a good show, but I trust your judgment, so if you say it wasn't that worthwhile, then it probably wasn't. If you forget that the gardens were supposed to have an Italian theme, were they nice?

Sorry the show was so bland...that's pretty much why I don't bother with Green Bay's show. Mostly lawn tractors and replacement windows...ho-hum! But our "Spring Gardener's Conference" is coming up, so I hope to get enough pics to make a blog post, especially of the copper crafts segment. They offer a "living wreath" class this year though, so I may not make a copper trellis (or whatever) again, but that's okay! Definatley more hands-on and gardener oriented that a garden show. Hey! That's what those garden shows need...how-to demos and classes! Maybe someday...

Layanee, you can go to local garden centers and smell the hyacinths in just a few weeks! *gr* Thanks for the update on Tucker... they definitely don't live long enough, I agree, but it sounds like he has a lot of wonderful years ahead of him yet. (I just LOVE the way the labs especially get grey faces like his when they get older for some reason, so I had to ask how old he is! :)

Jodi, I hear you... lots of plastic siding and downspout systems, etc., at this one, too. I have never heard of Saltscapes magazine--I may have to sniff one out somewhere.

Claire Splan, very true... Petitti's does do tend to use a lot of houseplants and tropicals, but the effect is nice. And they are inspiring me to actually plant some houseplants outside this summer instead of just moving pots.

I would like to think that we're all setting the bar higher and higher... but... :)

Pam, sheesh. I'm already jealous about your camellias. If you add a huge potted agave, too, I may just keel over completely! *grin*

Ki, I wonder if they do use some kind of spray at S&H? If they do, it must be a really good one if you can't automatically ID it as fake... I'd like to have some of that for my house, then!

lisa, oh... I should have taken a picture of the tractor displays! Lots of acreage devoted to them, and things like front loaders put onto lawn tractors on steroids like you wouldn't believe. (My Dad, who built his own leaf blower and plow attachments for his John Deere before JD thought to offer them as accessories, would have been in heaven!)

I vote for the living wreath class, and then a loooong, details post sharing the info with the rest of us. I would LOVE to make one of those for myself this year. :)

I enjoy the Flower and Patio show here in Indianapolis. They do have a large focus on hardscaping, but they also usually have lots of plants and flowers. It is like a spring vacation for me. By that time of year I'm pretty desperate to see something, really anything, in bloom.

I love garden show photos. Thanks for posting these as well as your GBBD photos.

I've been thinking about going to the shows in Syracuse and Rochester. I was disappointed last year with the Syracuse show but liked the speaker. With all our snow here my theory is that a bad garden show is better than looking out my window at a sea of white. sigh....

Hi Kim,
Springfield Mo.'s home and garden show was this past weekend. I didn't go and haven't for some years.
It is the same here as well- nothing worth noting- nice to know we aren't just behind 'cause we are hillbillies. It's the same all over.
I stayed home and dreamed with my seed catalogs.

From your photos, I agree, nothing there looks at all like an Italian garden. Where are the fountains? Where is the Wisteria? Where are the espalied fruit trees? Those are things that could be adapted to an Ohio garden. This shows a sad lack of imagination on the part of the presenters.

There must be a theme running through Flower and Garden shows this winter. I too was disappointed at a regional show on Friday that I used to love. You can read a review of it on my blog at atidewatergardener.blogspot.com.

Enjoyed your blog on the Cleveland Home and Flower Show. Our company used to enter the show and work long hours to make it beautiful -- now we put more into our store and spend more time with our clients. You can smell our store anytime! LOL! -Stacy www.pandysgardencenter.com in Elyri, Ohio.