As Carol, founder and matriarch of Garden Bloggers' Bloom Day, noted in her post for this month, spring seems to be running a bit late. At this time last year, I showed pictures of 'Chocolate Chip' ajuga in bud, and added a last-minute picture of a flowering frittilary. This year, I don't see buds on either... yet. 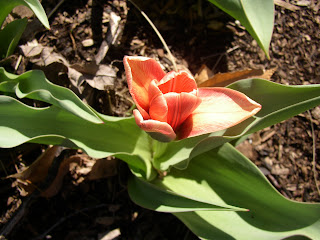 But really, I'm not all that far off from last year. My beautiful 'Ivory Prince' hellebores are blooming, along with their 'Pine Knot Strain' cousins. And there is one early tulip in bloom. Outside of the aforementioned frit, a tulip and some hellebores were exactly what I had blooming in April 2007.

The petite beauty above is 'Shakespeare,' which Netherlands Bulb Company listed as t. greigii on the tag but which I see ID'd as t. kaufmanniana, native to Turkestan, elsewhere on the web. 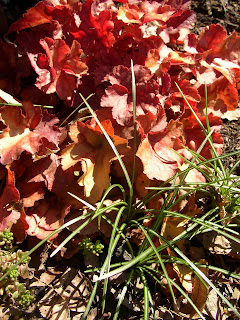 I was initially a little dismayed at the pastel-but-bright orange color of 'Shakespeare,' since all of my other species tulips are supposed to bloom in various shades of red. But that quickly dissipated when I noted how well it echoed the color of my 'Peach Flambe' heuchera, and even the reddish tones in my beloved bergenia. Since nothing else is showing much color right now in the front yard, that works for me.

In the backyard, I now have TWO winter aconites and a handful of snowdrops blooming. Lots of other foliage is showing now, too, including 'Geranium' and 'Orangery' daffodils, and the uber-cheerful tulipa tarda.

Plants in bud include 3 different cherry trees, more species tulips, and blueberry bushes. In addition to those flower buds, I have leaf buds on many other plants (including my tree peony) and it doesn't appear at this point that I've lost anything of consequence to a rough winter after a drought-ridden summer. Which is enough to make any northern gardener happy in the spring!
Posted by Unknown at 7:50 PM

Oh Kim! Blueberries! I am so jealous! And you have so much standing by...next month should be really something...I'm so glad your plants made it through the winter...well, aside from the lemon grass!

Two winter aconites!!! Well, it's a start. ;-) How nice that the wrong tulip turned out to be the right one after all, as far as colour schemes are concerned. Serendipity!

I'm glad to read that spring has come to visit your garden too Kim. Happy GBBD!

Blueberries blooming...how I wish they would grow in my garden. I'm not a "tulip person" (maybe because they don't grow too well over here) but I like the color of that 'Shakespeare'.I bet it looks great with the beautiful red bergenia

Kim: I love that tulip and all orange tulips. It does echo that heuchera beautifully. I really like Princes' Irene which you would appreciate if you like 'Shakespear'. Winter aconites are now on my list with 'Ivory Prince'. Oh, the power of the words of the garden bloggers! They will be my economic ruin! LOL

You are ahead of the color game Kim. I noticed in a Brecks catalog this week that they have orange tulips and orange hyacinths for next fall.

Peach Flambe is gorgeous! Although the name makes me hungry for some reason... :)

I like the Heuchera Peach Flambée - and the Tulip Shakespeare must look gorgeous nest to it!
/Katarina

Congrats on all the life springing forth! Slowly but surely around here...next month should be awesome!

The colors even harmonize with your blog, Kim!

I wonder if one reason your spring seems to be unfolding in a normal, timely fashion is the sandy well-drained soil where you garden... bet those who garden on heavy clay have to wait longer for the chill to leave the ground.

Leslie, where were you to remind me that lemongrass is NO WAY hardy here before I sampled the garlic?! ;) By the way, it's nice to see that you're a little jealous of my blueberries... because I'm dying of envy (still) over that wisteria.

Yolanda Elizabet, hey, it's a pair, right? lol. Maybe they'll have offspring next year and then I'll have more aconites! *wink*

gintoino, I used to dislike tulips, too. And daffodils. I'm slowly coming around to the little species tulips (although the blowsy 'Prinses Irene' and 'Queen of Night' are also favorites) but the jury's still out on the daffs. :)

Layanee, I just left a comment on your blog... I also have 'Irene' in my front garden! lol. I know what you mean about the power of words of other garden bloggers being your economic ruin... too well!

Lisa, orange hyacinths?! Hmm. I'm not too sure about that one. I like orange tulips well enough, but I was unprepared for the bright pastel color of this one. Kind of like sherbet.

jean ann, thanks for stopping by... and I know what you mean about the name! (Dolce creme brulee... peach flambe... whoever names these heucheras must be a fan of desserts.)

katarina, they aren't quite next to each other, but close enough that they provide a nice harmony. Now that you mention it, maybe I ought to move them cloer next year... hmm...

lisa, thank you! Soon, the snow will melt for you and you'll be back into spring. I promise. :)

Annie... lol... I changed them today. I liked the orange in the background since it's bright and energetic, but the header isn't doing it for me anymore. I think I need to do my own template one of these days.

You know, I wonder if there's something to that sandy vs. clay thing. I could see the clay "holding onto" the cold a lot longer, too. Makes sense to me.

I like your color coordination, too. It seems like it is taking longer for you to get to spring, so I bet May really going to be something in your garden.

Thanks for joining in for bloom day!

I'm so glad all is well after your drought ridden summer :) Beautiful blooms..and two winter aconites..let's see if they can multiply :)

Kim - got a few minutes to play? Tag, you're it! Click over to my website for the rules!

How beautiful is that? Unfortunately spring has not yet arrived here in Northern Illinois. But at least I get a taste of it. Love your blog, I found it through Cottage Magpie. Keep up the good work.

Kim, how wonderful to see such blooms at this time of year. We're having a bit of a cold snap and snow storm up here but seeing your photos of all the growth in your neck of the woods is so hopeful! Lovely, enjoy.

Just had to come and have another look at your Prince Hellebore. The Heuchera is lovely ... I'm glad Shakespeare worked out okay.

That tulip looks like a winner to me--I will have to order it for my collection of species tulips. Eventually, I'd like to have all of them--or all the ones I can get.

Well, I'm always happy to see a tulip coming up out of the ground... I took a peek at your Ivory Prince too and oh, it is quite a specimen. Both flowers I have to enjoy from afar as they do not grow down here in the south.

It sounds like your garden is on the verge of bursting forth -- next month should be a lot of fun for you.
Meems @Hoe&Shovel

The hellebores at our house are fabulous this year. I know spring seems to be dawdling there, perhaps in Maryland too. But at least it's not nearly as dry as last year.

With our glorious weather it seems like we are catching up BIG TIME (weeds as well)! Happy thoughts for you and your beautiful garden, Kim.

I love the way your tulip echoes the heuchera color. I'm way late for your Bloom Day post! I didn't get around to many this month, so I'll be doing it gradually.
Your Ivory Prince is a knockout! I must plant more Hellebores. Mine is alive and growing! I thought it was dead, so this makes me very happy :)