What's In A Name?

Looking through my plant tags this evening, I realized that some of my plants seem to go together very well. Almost too well... as if the specific cultivars were chosen because their names went with a theme of sorts. 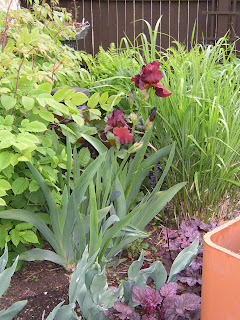 On the one hand, I have the "Warrior Plants." Plants with the names of warriors, implements of war, those who might lead others into battle, and things that might easily be fought over or spilled during combat, including:

On the other hand, there is definitely a "Fire and Ice" theme going on as well. This is probably very fitting for someone whose high school boyfriend referred to her as the Arctic Queen. (Yes, I know there is a clematis by that name... no, I will not be adding it to my garden!) 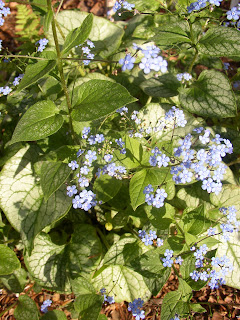 Interestingly, I had very little (okay, nothing) in the way of plants with sugary, warm-and-fuzzy names, 'Sweet Kate' spiderwort aside. So that makes me wonder... what's in a name? Do the plants I tend to like lend themselves to certain types of names? 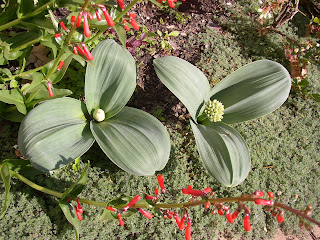 Most of the time, it's just about the plants when I make purchases. I have a few unfortunately named plants in my yard. And I would have purchased regular allium karataviense instead of these 'Ivory Queens'... but does a cultivar name subconsciously influence my buying decisions?

For example... would the beautiful red iris above have made it into my cart if it had a sappier name, like 'Heart's Delight' for example, instead of the bold 'Samurai Warrior' that (I admit) kind of gets my blood racing? (That it reminds me of a certain sexy actor in The Last Samurai doesn't hurt, either.)

Hmm. While I ponder this, I would be interested in knowing whether any other gardeners have noticed a theme running through their gardens, unplanned. These name themes certainly snuck up on me--it's not like I was planning a theme garden, that's for sure. I'm simply not that organized! Anyone else?
Posted by Unknown at 11:55 PM

The only theme I have is that Heather's Garden has a heather plant, and since technically that plant's name is not heather, it's not much of a theme.

theme garden - hmm, maybe 'ah wont that' which turns into 'ah got it, now where do I put it?' ... j/k.. I had a white garden once that I enjoyed a lot! I think the names of plants are very carefully chosen to be appealing, and I am ok with that. Sometimes it makes me like a plant even more (like I need another reason!)

How interesting.. I'll have to make a list of my plants and see. It might show the personality or character the gardener is, don't you think? Now I'm really curious what I have. I bet I have more sugary sweet stuff. *giggle*

The only theme I have in my garden is "drought tolerant". If a plant is drought tolerant than in can go in.
Anyway, most plants are sold unlabeled around here, and some times not even the sailsperson knows what plant is that...not much garden tradition around here.

This is an intersting question Kim. In my garden I know names of plants can make a difference as to whether I buy them or not. I love birds so I have lots of plants with bird names. I have plants that have names of people I love.

I suspect sappy names go on sweet-looking plants which do not appeal to you, but I think there must be a subconscious aspect to your plant choices. The only thing remotely resembling a theme of names in my garden is color & fruit: gold, cream, ruby, bronze, red, raspberry, rose, lime, gilt, white, purple. These are all parts of cultivar names. Not very intriguing, as yours are.

Yeah, that's great, Kim. Now I have to go sit in my garden and look at the plants to see if I notice anything. Thanks a lot.

You commented at my place about pickling. I hope you're going to make an extensive post telling us all about it. I want to try pickling some of my garden vegetables this year too.

Kim: Hmmm....I will have to check on the name thing but try Heuchera 'Peach Melba' in spite of its' sticky sweet name! I usually go for color coordination rather than the name although I like to pick nail polish by name! LOL!

You started something interesting here Kim! I've been wanting to "map" out my garden and plant locations for a long time, and when I do a theme (or lack thereof) will surely appear. Of course at the rate I'm going, an answer should be forthcoming sometime this fall. ;-) Offhand I'm not aware of a name trend, just continuous collecting of just about everything! (I share your attraction to big strong warriors though! :)

You do have an interesting mind, Kim! My daughter & niece had the nickname 'Fire & Ice' when they were together, so that one cracked me up.

But I did take your inquiry seriously! Although most of what I grow seems to be a species or unnamed selection rather than a cultivar, there are a lot of women's names like 'Julia Child', 'Lady Banks', and 'Belinda's Dream' roses, 'Georgia Scarlet' cupheas, 'Sweet Kate' tradescantia, 'The Bride' gaura, 'Mathilde Ferrier' oleander, 'Thalia' narcissus, 'St. Brigid' anemone, 'Katy' ruellia, 'Miss Tilly' platycodon/Balloon flower, and 'Ramona' clematis, but is that a theme or just the kind of names used most often?

Hi Kim, great thought provoker there. I have an iris that looks like your warrior named Spartan, that fights in, doesn't it? I will buy any plant with the words magic, dragon or black, just because. The sweet names don't appeal to me, but wouldn't prevent a purchase of something that really caught my eye. My daughter will buy anything with the word love in it. HA I do think we are affected by the names. Your ivory queen allium is one on my list this year, is it really better than the karataviense? ;->
Frances at Faire Garden

Heather, I'm so jealous! My old garden had a 'Miss Kim' lilac, but I was underwhelmed without the lilac scent. So now Kim's garden has nothing but warrior plants and a fire-and-ice thing going on. ;) teehee.

Muum, I do believe that I know your kind of theme garden all too well, too! lol. Your comment made me wonder how plants with interesting names get them. For example, what was the namer of 'Zounds' hosta thinking?

Salix Tree, I DO have 'Plum Pudding' heuchera, now that I think about it!!! I can't wait to see what you discover in your own garden.

gintoino, are you serious? How FRUSTRATING that must be, unlabelled plants AND people selling them who know nothing. :(

Greenbow Lisa, I like the idea of a bird theme. And that definitely sounds like it "fits" you!

You're welcome, chuck b.! Like looking around your garden paradise is such a tough thing to do... :) I'll do a post on pickling later for sure. But I'm a lazy pickler... I aspire to have organized shelves full of stuff "put up for the winter," but in reality I have a few jars of certain things that get me through the long winter.

Layanee, darn it, that's another one I think I have. Or maybe I have 'Marmalade' instead? These heucheras (I mentioned above that I have 'Plum Pudding') are killing my no-sweets-in-the-garden rule! lol.

lisa, you make it sound like you have too many projects! *grin* I need to map out my garden, too. I am glad that you mentioned that... I need to get on it already. (And I'm glad I'm not the only one with a softspot for big strong warriors! lol.)

Annie in Austin, I am grinning at your daughter & niece and their nickname. Too cute. :)

I think that a tribute to wonderful (I assume, to have flowers named after them) women counts as a "theme." And if those last few don't suggest you need a party, they definitely suggest a second (or third, or sixth, or...) honeymoon!

Frances, how cool--I love that 'Spartan' and 'Samurai Warrior' look similar in color! Magic isn't a trigger for me, Black is often, but Dragon definitely gets me every time.

I don't think that the names would necessarily prevent me from buying something I wanted, either. Although I would probably not use the name in my head, if that makes sense. For example, if I didn't like my 'Samurai Warrior' so much, I would be thinking of it in my head instead as my "dark red iris" or something.

And I can't answer your question about the karataviense... for all I know, they are one in the same. But 'Ivory Queen' was the only one offered in the garden center! lol.

Love your humor and take on life, Kim. Great question but I have no answer since after gardening for over 30 years, I spend hours digging and dividing with not much space left to purchase new plants yet salivate each spring (since I'm an addict) drawn to many names, particularily heuchera and hosta, that I MUST have! (Visiting my garden, you have seen photos that attest to my many addictions)

what an interesting post! i must confess that i'm not organized enough to make these lists. almost all my plants have lost their markers, and i don't remember their given names. but what you wrote resonated with me very strongly, so i suspect i do choose and mix plants based off their names - i just don't know how often. i did seek out a clarkia to go with my lewisia.

When shopping at a garden center, I usually see and fall in love with a plant first, then find out its name, so I would guess I have a reather ecletic garden of names. In catalogs, I tend to focus more on the names.

This summer, I am undertaking a complete 'cataloging' of my garden and will have a better sense of any trends in names. Wish me luck!

I love your Garden Assistant: Coco.
My assistant:Hana(Border collie)helps me to put the chicken in the Chicken house.Please see my garden and Hana.
http://iyasaka.blogspot.com/
Please link with my blog if you like it. 日々好日