It is currently 93 degrees. I gave in to the puppy dog eyes I got from both my Garden Assistant and my boyfriend on Friday and turned on the A/C. I managed to get a little crispy on my forearms over the weekend, in spite of reapplying SPF 50 and SPF 70 every 4 hours. (I'll be stepping that up and reapplying every 3 from now on, just to be safer.)

Overall, it's just miserable. I feel the way my 'Othello' ligularia looks: 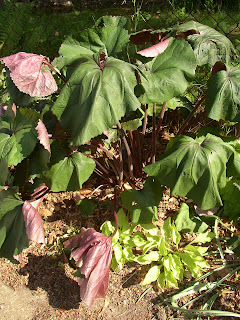 A few feet down from 'Othello,' my 'Sioux Blue' Indian grass (sorghastrum nutens) looks a bit droopy to me, too. But still makes a nice contrast behind my 'Regina' heuchera: 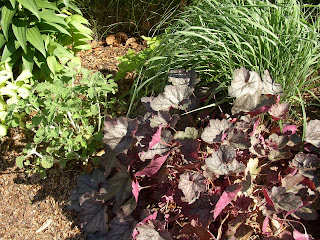 As I leaned over to take the picture above, I noticed a flash of blue out of the corner of my eye. It was the first bloom on my little clematis integrifolia, which admittedly needs some kind of structure to grow through. (I had planned to use lemongrass for this, but lemongrass is harder to find than cheap gas around Cleveland these days.)

Earlier this morning--around 7:30am, when it was "only" 77 degrees--I snuck around the garden for a few more pictures. It's no 'Coppertina' in terms of flash and color, but I really like the fresh green leaves on my 'Diablo' purple ninebark: 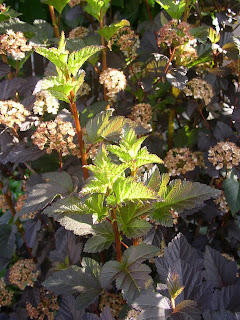 My salvaged rotors were used to feature little alpine plants, and both have a little collar of pebbles that will go away once the plants start to spread a bit. Here you can kind of see the planted saxifrage, but it's nearly hidden by the pretty linaria 'Mini Lights' snapdragon: 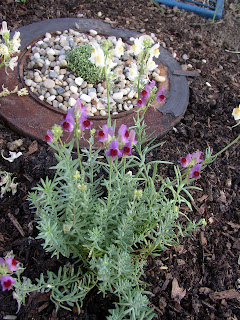 And here is my 'Cape Blanco' sedum. The earth around this is bare for now, but I actually seeded some carrots around here. So the sedum will have some company soon: 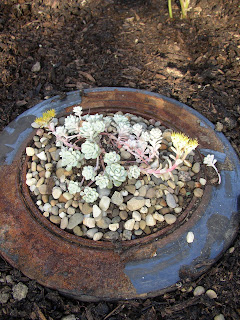 Last but not least, I planted up my tiles yesterday. There is 'Toffee Twist' carex, 'Yubi Red' portulaca, and several cuttings of delosperma nubigenum, a hardy ice plant, in each one: 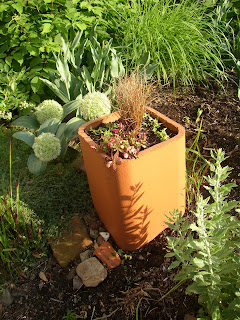 Behind the tile planter above you can see my pretty 'Ivory Queen' alliums in full glory... and a pretty Russian sage in front. Speaking of Russian sage, I was rather surprised to see a number of baby Russian sages in my garden this spring. I hadn't noticed them before, so I'm wondering if it's a good year for Russian sage seedlings... or a bad year for a lazy gardener who would normally have had this bed mulched by early June?

Ah, too much to worry about now. There are more important things to think about, like where we are going to head to eat right now. Because we don't have the fixin's for salad in the fridge at this time, and it's definitely too hot to cook!
Posted by Unknown at 6:06 PM

It is cold here - we should do a little temperature trading! I haven't planted my peppers yet, because it is in the 40's at night. Maybe I'll plant them and cover them.

We've had the heat in our area too. Some of my plants are a little droopy like your ligularia. Right now though we've got a thunderstorm with some rain to (hopefully) break the humidity. I like what you've done with the rotors. What a splendid idea!

Ligularia are famously droopy in the midday sun -- even when it's not all that hot or all that dry.

The brake rotors look great, Kim - and I hope the linaria hold on for awhile because it's a good combination.

May your heatwave be just a blip, with a return to seasonal 80's for you! Unfortunately we know our summer heat is here to stay and fear the drought will stay, too. Gloom runs amok in Austin garden circles.

muum, we were still chilly (in fact, some places had a very late frost last week on Tuesday night) up until this heat wave hit! I'd gladly split the difference with you for sure.

karen, you must have brought me some luck in the way of a thunderstorm that blew through while we were sitting at Barnes & Noble, post-dinner. It dropped a good 15 or 20 degrees during that, and by the time we left it felt much more livable. :)

Really, Craig? Hmm... maybe I should rethink this one, then. It's just so hard to resist with that big, dark dusky leaf. There doesn't seem to be a lot else that will give you that tall, rounded dark leaf for contrast in the shade garden. :(

Annie, you snuck in on me while I was responding. :)

As much as I love looking at all of the gorgeous gardens you Austinites grow, I couldn't imagine gardening in that heat of yours. I think you're all a very special, very hardy breed! Seriously.

As much as I'm whining right now, the weather did break a bit with the evening thunderstorm, and it's supposed to break (to our normal 80s, as you noted) for the week tomorrow night. I'm looking forward to that.

Your garden is looking lovely, Kim. I HATE this HOT weather. The garden explodes ... plants appear and disappear too fast and I wilt working to catch ...

I've whined about the heat too. It was just so sudden that there was no time to adjust. I don't blame Coco for wanting the AC on - it's got to be hot under all that fur. My Borzoi used to hate summer. She'd spend most of it lying on the kitchen floor in front of the AC vent with her tongue hanging out.
I won't even try Ligularia until I get a watering trough to make a bog garden in. The dark foliaged forms are so beautiful.

Hi Kim. Found you via Craig and the music meme, which I'm psyched about. I'm new to your blog but really like your style (and car part recycling!). Looking forward to seeing and reading more. We've been out of the country for 5 months and so are scrambling to get the garden in (not to mention getting back to work) so no recent posts from me, but will soon start up the news from the garden in Slaterville Springs.

I feel your pain in regard to the heat, Kim. Ugh. Love that Toffee Twist carex and wonder if it would grow here in Austin. I've seen it in the nursery but not in anyone's garden yet. I tend to be conservative about plants until I know they're drought and heat tolerant.

Enjoy that A/C until your weather breaks.

This weather has been something else! We had a tornado touch down nearby earlier tonight and of course there was the storm on Friday night that was pretty wild. I swear I saw a tornado. I took a picture because I was coming in from the garden and it was just this wall of dust as high up as you could see, with debris flying all around. S-C-A-R-Y!!

I finally found a 'Coppertina' in Ft. Wayne, but it was $40 and I'd already just bought three 'Summer Wine'. I will say though, that it was GORGEOUS. I can't even imagine how that thing will glow in the fall. Maybe if I find a more affordable one, I will get it just because I want one. LOL.

Joey, I'm waiting for that to happen here, too... with the heat, and the heavy rains from the past two days, it will definitely explode.

Mr. McGregor's Daughter, I know. She's really the one who gets me--HE doesn't have to wear a fur coat, after all! I wish I had your discipline in regards to the ligularia. I knew it would want more water than I could give it, but I couldn't resist.

Lynn, thank you for stopping by and commenting--and leaving me a few compliments to boot! I can't wait to see what you post for the music meme, and also what the garden looks like when you get it in. :)

Pam/Digging I don't know about the heat... but I do know that this isn't hardy in our zone because it can't take the cold winters! I'll let you know about the drought thing, as I plan to only give these planters as much water as the portulaca needs. So, not much!

Kylee, hasn't it been wild? They keep saying that these storms are following the same path as the ones that came before them, hence the repeat problems. That said, since everyone is safe... I can't wait until you post that picture!

Oooh, I kind of forgot about 'Summer Wine' since I was so entranced by 'Coppertina,' but those three are pretty, too. I want one of both! (But I need a bigger lot for that, lol.)

That's some dramatic droop! Having lived in Hotlanta for two years, you and your plants have my sincere sympathies about the heat.

I like what you did with the rotors! That would be fun to riff on with other metal circles and stuff.

You always surprise me with your re-purposing! I never would have thought to use brake rotors like that, but they look great! I like that 'Cape Blanco' sedum...gotta get me some of that!

I am very pleased to read your blog all the post are interesting and the images of the plants and the garden are so attractive.
Most of the time while visiting your blog I spent on wathching marvelous images of flowers and gardens.