On every spring and summer morning that I make the drive to work, I take time to notice some of the interesting plant life hanging out on the side of the road. Along with the grasses, "ditch lilies," butterfly weeds, teasel, skunk cabbage and the occasional verbascum, there are usually some good stands of the architecturally interesting angelica. Like this one: 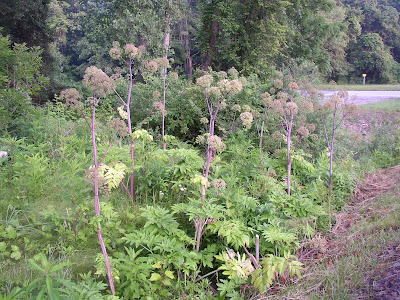 Much of my drive is highway and housing developments, but when I near work I get to drive through part of the Cuyahoga Valley National Park. I wonder if the wild, primitiveness of the angelica after all of that "progress" isn't part of its appeal. It kind of punctuates the messy natural beauty around it. Here you see it contrasting against a fallen tree that's so weatherbeaten it looks as though it were driftwood: 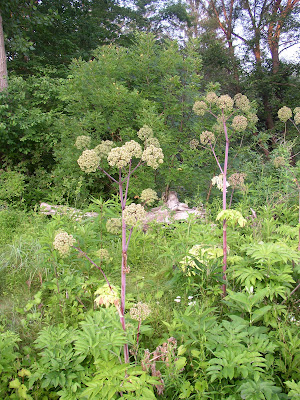 Unfortunately, these photos were taken this morning and the angelica (which I believe is a. archangelica, a.k.a. angelica officinalis) is almost done blooming. In bloom, their flowerheads are a pale lime green color. They fade to whitish yellow, then a pale gold, and finally turn a tawny brown color. Here you can see a couple of blooms in various stages: 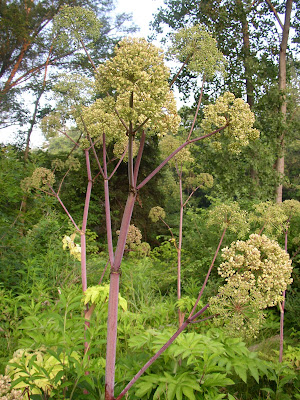 The seeds have reportedly been used in some recipes for absinthe, and to flavor some wines from the Rhine Valley as well. The stems can be candied, and the whole plant was used as an edible vegetable until modern times... but you have to be pretty sure of your plant ID before you start cooking with it. Several plants with look-alike leaves and/or stems are pretty toxic, including the potentially fatal poison hemlock.

The roots are used in herbal medicine, and the plant reportedly got its name because it was thought that the archangel St. Michael introduced it to the people as a cure for the plague. Another explanation for its name is that it normally blooms around St. Michael's day, which was traditionally May 8th, and thus was named for him.

All of the pictures above were taken in the early morning light, when the angelicas have their faces in the sun--at least from my angle of view as I drive to work. Later in the evening, the giant globes of seedheads glow, backlit by the sunshine: 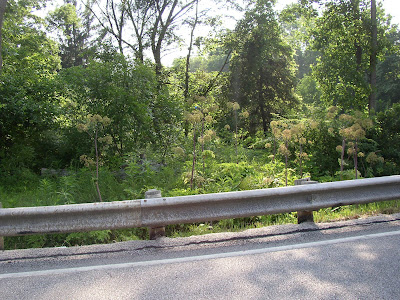 Yes, I literally stopped my car on the road to take this shot, so you would get to see my usual afternoon view here. It may sound kind of funny but I think of these as "my" angelicas, even though they're here for all of the world to see. I'm sure that I'm not the only one who notices them on the roadsides, but unless I move to the country I simply don't have room to devote to angelicas in my garden. Since these are as close as I'm going to get to having my own angelicas for the time being, I have no qualms claiming them as "mine!" :)

I hope you enjoyed my angelicas... and with that, I should head to bed. I picked a whole big box of tart cherries from a friend's yard this evening, and tomorrow will be devoted to pitting cherries and making jam.

And this weekend I'm heading down to visit a good friend in Cincinnati... and swinging up through Dayton on my way home to check out what The Overachievers have been up to in that huge garden of theirs. Full reports will follow--have a great weekend, all!
Posted by Unknown at 11:36 PM

I picked a whole big box of tart cherries from a friend's yard this evening, and tomorrow will be devoted to pitting cherries and making jam.

Oooh. That sounds good. Is making jam hard? Could a total noob (read: me) do it?

Yes, those angelicas look great. We have them here in the fields too and for some time now I've been tinking about bringing them into my garden.

Is it weekend there already? Here it's only Tuesday ;-)

Kim, it is funny how when we drive the same route to work we feel ownwership of certain spaces. I don't blame you for claiming these lovely wild flowers. I see them around here too but I didn't know much about them. I think I have even pulled a few from the front flower beds. ha...

Interesting post. I have seen these plants but never knew what they were. Now I have something new to look for out the car window!

Fern, I've never made cherry jam before but I have made strawberry and grape. The jam making part is relatively easy (picking and cleaning the berries can be tedious, but in a good way) but the sealing part can be a pain.

I started out making small batches, like one jar at a time, so I could use what I made almost immediately. Then I did bigger batches of "freezer jam" which literally just gets stored in the freezer. Then I graduated to using paraffin wax on top of jam in glass Ball jars to seal them. That's a pain to work with, though (requires a double boiler, clean sides to the jars, etc.) so I'm going to can them using a hot water bath for the first time ever this week.

Regardless of what kind of jam you make, I think you should go for it! Even our great-grandmothers who did this stuff all of the time were totally noobs once, too, right? :)

gintoino, lol! I am going to be so busy between now and then that it might as well be the end of the weekend already! I would totally bring the angelicas into my garden if I had a bigger one, or if I had a lighter hand at mixing plantings.

Greenbow Lisa, you might have weeded them out! They are supposed to be good about seeding themselves around. And yes, I do feel ownership of some of these spaces I drive through... so much so that I really want to stop and dig up the multiflora rose, garlic mustard, etc. :)

Joyce, you and I were posting comments at the same time, I think. Thanks for stopping in! Getting to know a new roadside plant is like buying a new car, I think. Once you become acquainted, you start seeing them in lots of places where you'd never noticed them before. :)

I started with one angelica in the garden and now have three! Gotto go deadhead those babies! I have never seen them naturalized in this part of the country so it was interesting to see them spreading along your drive to work. Love 'em!

Layanee, oooh... you have the perfect garden for them with all those open spaces and rocky outcroppings. I bet they look fabulous! :)

I've been seeing a lot of angelica around here, also. More than usual, I bet because of the steady rainfall. I think I'll stop and get some seeds and try it at my place...I have the room. :)

The Angelicas are so stately in height but with such cool leaves - no wonder you noticed them, Kim. Your photos got me interested so I started poking around.

The sites I've been looking at say Angelica officinalis is the European plant used in herbal medicine, but that an almost identical looking native plant is called Angelica atropurpurea, American Angelica, but it's not supposed to be as useful or aromatic.
Can you tell whether your Angelica is an escape or a native? This is just academic for me, since none of them are likely to survive in Austin ;-]

Have a great weekend!

Lisa, I bet it would look really good in your naturalized meadow area! I can't collect seed from these guys, though... they're on park lands. Ah well.

Annie, trust you to be the sharp-eyed one. :)

I ruled out a. gigas because the flowers were not purple, too. After much debate, I ruled out the a. atropurpurea because of the leaves... but now that I look yet again, I'm not sure what convinced me that the leaves were a better match for a. archangelica. And I could definitely be persuaded to go the other way with my ID. So maybe I should go back and take some detailed pictures of the leaves to see if that helps? Hmm...

Fern @ Life on the Balcony said...

Okay Kim...if you think a noob can do it, then I'll put it on my to do list. Are all fruits about the same level of difficulty?

I love the look of Angelica ... my parents have it everywhere in their gardens at the cottage. My dad grumbles about picking the numerous seedlings, but he doesn't really mind since the plants look so beautiful in bloom and with seedheads. They don't start blooming here until into July though.

It looks as if you have a beautiful drive to work.

I have admired our native Angelica, but I agree with you that there just isn't room for such a large plant in a small garden, especially one that doesn't have boggy soil. They are beautiful.

That sounds truly lovely. Where do you work?

We have an Angelica on the coast too. It's lovely, but I don't know it's name.

Wow, that's beeeuuuuutttyyyyfulllll! As for making jam or whatever, why? Sounds like a lot of hard work. Of course, so is gardening, so you know what? Never mind. A poem:

Jelly and jam
is better than ham.
Flowers and leaves
are better than most Steves.
So tomorrow night
I'll be alright
as I pit and cook
and fly like a chinook
(helicopter that is)

Thanks for posting this! I've been driving by a large patch of this plant for about 20 years and never ID'd it. It's in the same kind of roadside situation, but I'd get run over if I stopped to look at it very long (no shoulders on the road there).