A few weeks ago, after the garden center took all of us seasonal workers off of the schedule, I found myself skimming through the Cleveland Botanical Garden website. I was planning to take advantage of my newfound free time and check out the CBG once again, but then I noticed a blurb on the site about "horticulture volunteer" opportunities.

I thought about how much fun chuck b. seems to have volunteering at his local place... and I just couldn't resist emailing the volunteer coordinator to ask whether I was too late to get started volunteering yet this year. Several emails, an interview, and an afternoon of orientation later, I officially became a volunteer at the Cleveland Botanical Garden!

I had told them that perennials and herbs were my strongest areas of knowledge, but they seemed to be shortest on help in the Glasshouse. They didn't have to twist my arm to get me to agree to work there--I figure it's an opportunity to help out where I'm needed and learn a few new things! 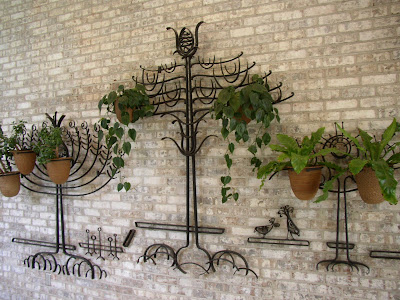 Part of the glasshouse volunteers' work includes watering the indoor plants, like the ones in the exquisite terracotta pots hanging in the ironwork artwork above and others throughout the hallways and in the cafe. But most of the work is done in the glasshouse biomes, and in the working greenhouse that is adjacent to them.

I didn't know if I was allowed to take pictures in the working greenhouse--maybe I'll be brave enough to ask after I've got more than 2 days of work under my belt--but I took a few pictures of the public glasshouse areas to share. 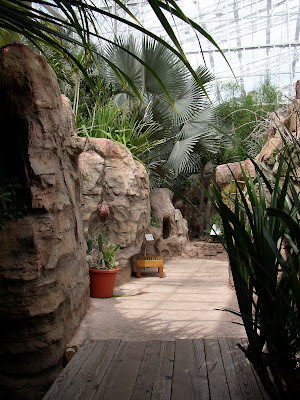 Above is the public entrance to the Spiny Desert of Madagascar. On the left (just out of sight) is an African Black Millipede. Centipedes and millipedes usually creep me out, but this guy is so big he kind of looks like a snake with a vacuum brush of bristles on his underbelly. Okay, and he's safely ensconced in a tank--that helps, too!

In the first container there are a variety of opuntia (prickly pear) species, along with a sign explaining how the opuntia is choking out the native Malagasy plants. There is a similar message in a container around the bend that features a variegated lantana. But a few containers are just there to add beauty, like this one: 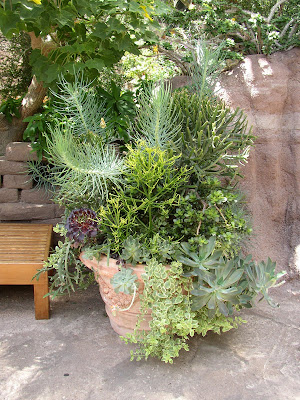 (Yes, I drool over those succulents regularly. *sigh*) The centerpiece of the Spiny Desert is an amazing replica of a Great Baobab tree: 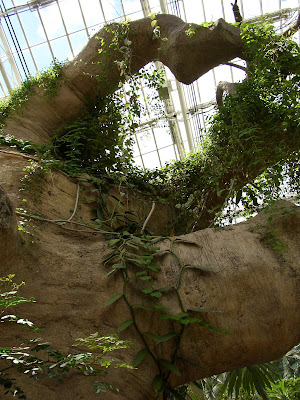 Notice the vine climbing up the baobab in the middle of the picture above? That's a vanilla orchid, vanilla planifolia. I mostly sweep and water so far, and one of my jobs today was to water the vanilla orchid. Another job was to help clean up a schefflera and two dieffenbachias that had scale and mealy bugs, respectively. Last week, I got to help prune a monkey puzzle tree, which was a fun challenge. The leaves are very spiny and stiff.

Also very spiny is the temrec (which looks like a hedgehog) in another of the animal exhibits. He came up to the window and checked me out last week while I cleaned the outside of his glass, but this week he wouldn't sit still for a picture. As we leave the desert, I can't help but take a photo of another of the garden's residents: 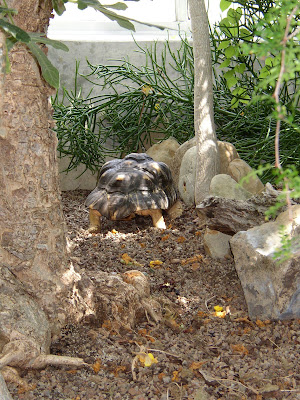 That is Gamera, a radiated tortoise named after the turtle in Japanese monster movies. Great name for him, isn't it?! As I walked through the glasshouse this morning to water the containers, groups of kids who were taking a tour with their local YMCA stopped regularly to check him out. "Miss, for real... is that a real, live turtle?!" :) 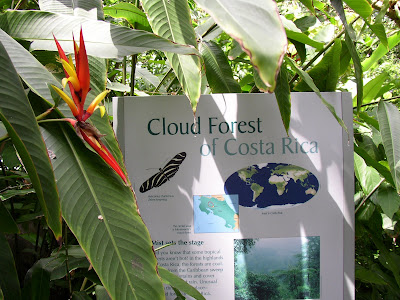 The Cloud Forest of Costa Rica is the other biome in the Glasshouse. It's a lush, jungle-y beauty, and there is a butterfly release every day at 2pm. But even in the mornings, there are many butterflies still flitting about. We start working before the garden opens to the public, and I admit that it's kind of cool to feel like you're alone in the rain forest with a bunch of butterflies! (You have to walk through a burst of air, and check yourself in a mirror, at the exit to make sure that no butterflies are hitching a ride on you or your clothing.)

This is cool, too: 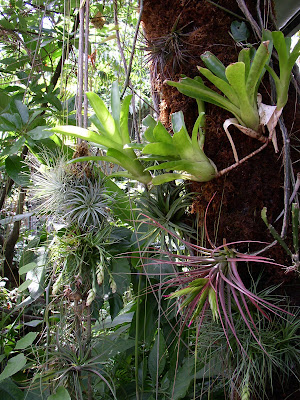 The centerpiece of the Costa Rica exhibit is a replica of a strangler fig tree, and there is an upper observation deck built around the top of this tree. To "hide" some of the metal support system, they wrapped beams and posts with moss and wired bromeliads and epiphytic orchids onto it. Way cool... I wonder if I could hide the upper track of my glass shower door with a similar trick, using tillandsias? *grin*

Here's a shot of the lower section of the strangler fig: 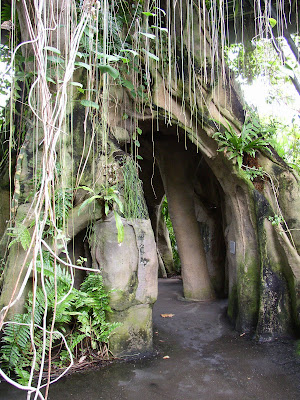 Some interesting plants inhabit the surrounding jungle. These guys were climbing around a boulder of sorts. They were very pretty, but their fuzzy stems somehow make me feel itchy: 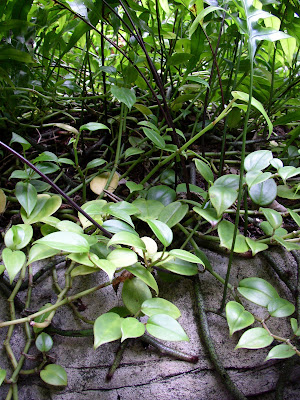 While this plant makes me hungry for wasabi peas:

Time to go upstairs to the upper observation deck, either via the glassed-in elevator or the winding staircase. I love looking out over all of these brightly colored bromeliads: 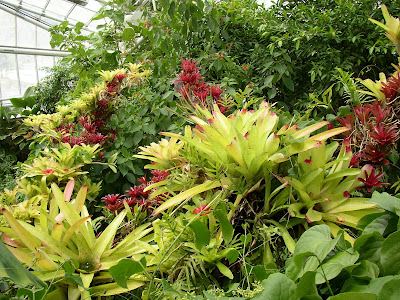 One of the many birds in the Costa Rican rainforest was perched in the middle of the yellow bromeliad in the lower left of this screen, drinking water from its center. It flew away, of course, before I could manage to get the shot in focus! But up here we have our own bird's-eye view of many things, including this waterfall: 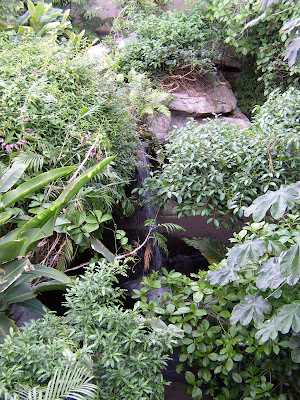 And from the other side of the deck, where you can better view the blooming shrimp plant (I think) at the top of the waterfall: 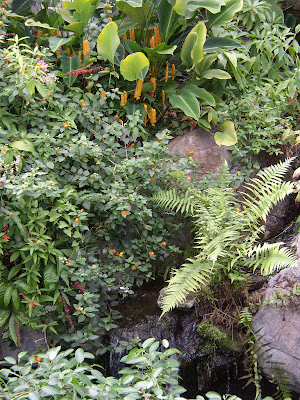 Speaking of other somewhat familiar plants, look at the cutleaf philodendron at the top of the strangler fig tree: 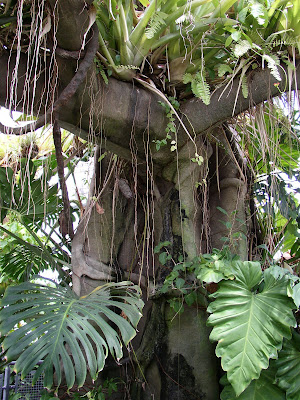 It kind of looks like our usual housplant varieties... until you see it in scale with my hand! (This is the one on the left side of the picture above): 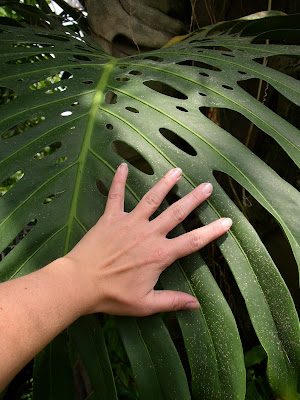 One other thing you might have noticed about these two biomes is that there is a decent amount of dead material lurking around: 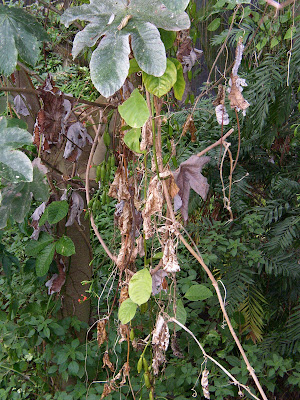 This "neglect" is actually on purpose, as they feel that it is a truer representation of what you would see if you were to actually travel to either of these places. We do sweep the walking path every morning, while the regular employees clean out the water features in the Costa Rica room to keep the pumps and filters in good working order. Outside of that, there isn't a whole lot of typical garden maintenance done... and they cut back on watering and keep the glasshouses cooler in the wintertime to put the plants into dormancy and also induce a good spring bloom.

Besides being able to help out a wonderful cause, and spend time in such a beautiful place, there are even a few other perks to volunteering. I think that my favorites are going to be the borrowing privileges at the Eleanor Squire library on site (I left with 5 books today) and the ability to visit the garden for free with a friend or two. Next Saturday, Brian plans to meet me to take a tour of the entire garden with me... since he sometimes reads this blog, I'll give him a little sneak peak of what he's about to see, here: 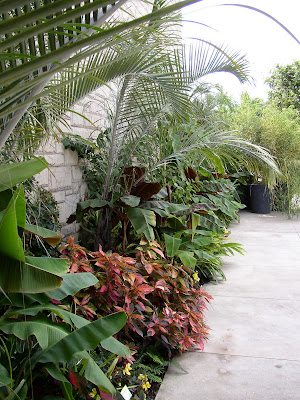 (This is part of the terrace garden, just outside the cafe. They change out these gardens according to the latest theme/event... and so these are tropical plantings for their "Go Bananas!" theme. I can't wait!)
Posted by Unknown at 8:00 PM

This is cool - your idea of volunteering is really great. I am curious of your next postings - how it is from inside :)

I haven't been to visit the Gardens for a few years now, but after seeing your pictures I definitely have to get there again, soon!!

Nice to get to have fun and learn new things. The botanical garden looks very cool...if I ever get back to Cleveland I'll have to make a visit!

CBG should have hired you as a promoter - these pictures are fabulous! Lucky you to be surrounded by such beauty every day (OK, so you might have to work a little for that privilege ;)
If I were in your area I know what I would be doing this Sunday. Hope you keep the pictures coming.

What a great place to work. I liked your comment about drooling over succulents--I'm from Arizona, and I really miss those plants now that I live in Virginia. I grow sedum, portulaca, anything that reminds me of them. I agree that the CBG should put you on its marketing team!

ooh, I might have to utilize my friend benefits to get to visit Gamera. My progeny would be so jealous, and so dwarfed!

Ewa, I have to say that everyone has been very, very nice in the two days that I've worked there. Other than that, it seems like it would be a typical workplace... balancing different personalities, etc.

flydragon, I was amazed at how much these glasshouse gardens have changed just in the year since I've been there. Many things have grown much, much bigger, that's for sure!

ingrid, thanks! I'm grinning that you said that, because I actually found the volunteer opportunity while looking at a full-time position opening in my field. Alas, they haven't called me back about that one. :)

My boyfriend and I are going to be touring the outdoor gardens together on Saturday (he's never been there before) so I'm sure that I'll have more pictures soon.

Cosmo, I'm like you with the sedum, portulaca, hens & chicks... and I am planning to mix in some agaves soon, too! But I haven't got your background with them, so I'm not sure why I love the succulents so much. :)

They are so lucky to have you! I wish you lived a little closer to Blithewold...! I can't wait to see some pics of the working houses - wonder if they're as glamorous as ours? ;p

Wow! what a wonderful volunteer opportunity. That's a place I'd love to visit.

Kim, they are so lucky to have you on their volunteer team. It looks like a fablous place to work. I love the tortoise. I have always wanted one for a pet but it isn't such a good thing to keep. They live a long time and it isn't fair to have one from the wild. I will just enjoy them in these situations.

I'm amazed how much they fit in to that one container you showed us. And an indoor baobab! Amazing. Surely this place must be one of Cleveland's top draws.

It's good that you snagged an indoor spot to volunteer. You can be there all winter. :)

That looks like a very interesting place. What an incredible mix of tropicals. Congrats on getting a position there.

Very exciting! I hope they're smart enough to hire you for the full-time position!