It's Christmas Day, and as usual my job has kept me from being able to go "home" for the holidays. Coco and I have instituted our own little Christmas traditions, including a hike in the Metroparks... so off to the Rocky River Reservation we went. 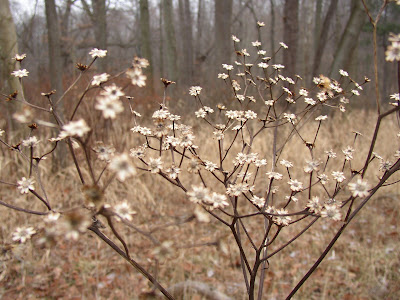 Just a day or so ago, the ground was dusted with snow... but today the dried, sun-bleached flower and seedheads were some of the lightest colors around. The Rocky River itself was swollen with snow melt, so much so that the water stretched uncharacteristically from bank to bank: 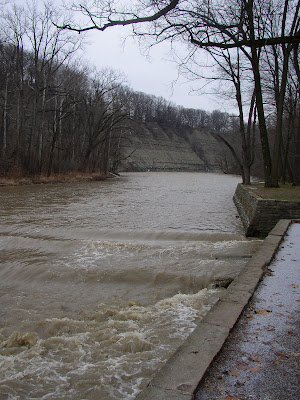 On warmer walks, the dog often gets to splash in the river to cool herself down, and amuses me by snapping at the top of the water to take drinks. (Yes, I've gone into the water with her a few times--and at least one time was NOT of my own volition! lol.) For example, Coco usually ambles down this old ford (I think that's what it is, anyway) where fisherman can often be found, to take a drink and get her feet wet... 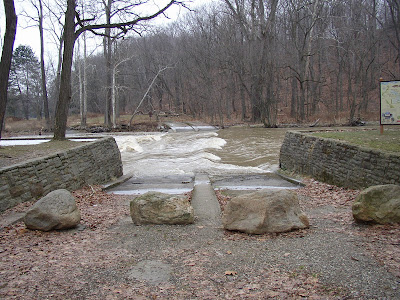 ... but not today! It was a brisk 25 degrees, and as you can see by the roiling on the downstream side of the ford, the flooded river was very fast: 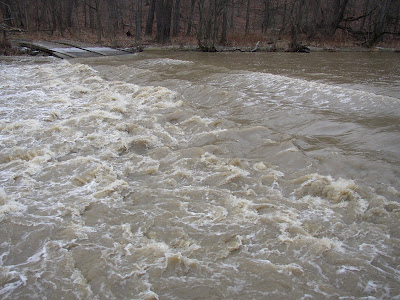 Since water fun was not to be on this hike, we took the time to sniff every log, stump, and leaf... and catalog a few of the more interesting ones in photo form. We saw delicate little fungus sprinkled across the north side of this rotting sapling: 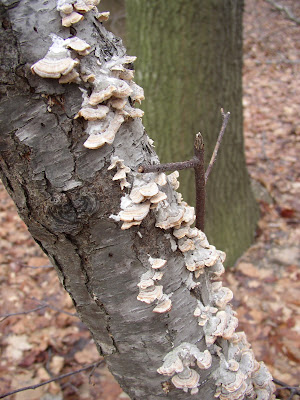 We admired pretty twists of tree roots, with the sandy ground around them washed away to reveal their form: 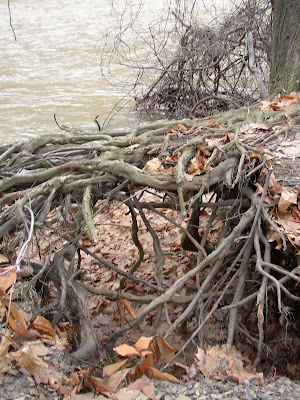 We cringed at obvious clues that some people who visit the metroparks have no respect for nature: 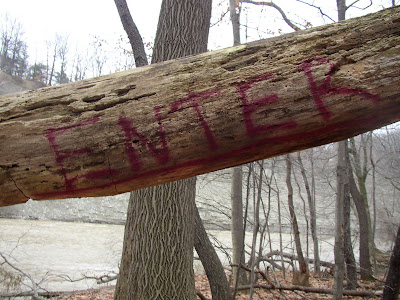 We were tempted to take our gloves off and touch a few of the bigger, more substantial shelf fungus, which look like they would feel soft and velvety: 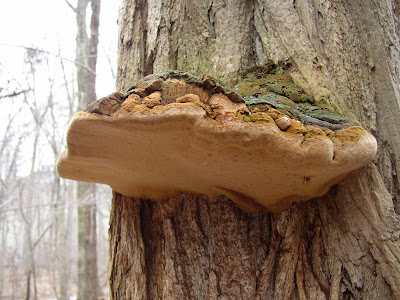 And we wondered what would result from a few of the interesting seedpods that were scattered atop the quilt of maple, oak, and other leaves on the forest floor: 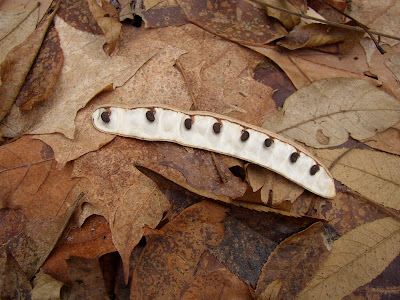 Deeper in the woods, where the rain and sun do not penetrate well--and where foot traffic had mashed down the snow--a pathway of ice marked the usual route. Between the slippery surface, the increasing amounts of brush, and a huge fallen tree that blocked the path ahead, we decided to take our cue and turn around: 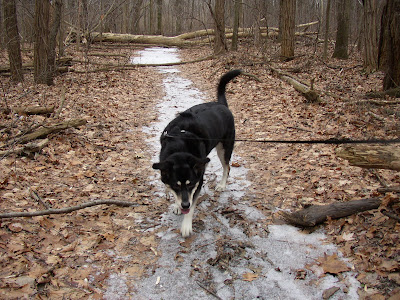 We were only walking for about an hour altogether--my gloves were a little inadequate, and without the river to quench her thirst, I didn't want to keep the dog out too long. But it was nice to continue a Christmas tradition. (And it made me feel better about how much food I ate later, when I joined a good friend for her family get-together, too!)

Nice post and pics about your walk in the woods. I haven't really been outside in days, hoping to get out tomorrow - way too cold, deep snow (for Seattle), too much to do. Looking forward to rain for a change! Hope you had a great day.

Good morning! Your walk was lovely and except for the snow your woods look like ours...lots of brown with a bit of green here and there! I am walking with a friend today and look forward to the time outside lets hope the rains hold off...

I just bought a book about fungi..Mycellium Running~~How Mushrooms Can Help Save the World (Paul Stamets). Have you run across it or heard about the author?

Have a wonderful weekend.

A Christmas morning walk is always wonderful, and this one looks especially interesting. I hope you're enjoying the holidays, Kim!

Merry Christmas Kim!! I enjoyed your walk a lot more than my own Christmas day activity: I shoveled my entire 120 foot driveway by hand. No choice though, it was @ 14inches deep and we're due for more. And after a warm spell this weekend followed by a 30 degree drop in temps, I'd have had at least a foot of ice! Ah well, the fresh air was good...plus the soreness reminds me that I actually HAVE muscles! ;-)

It sounds like you and Coco had a good outing. I took Luna to the park before we departed for the day too. I was surprised that we weren't the only ones out on Christmas morning. I guess there are many of us that must have a shot of fresh air every day.

Love the fungus photos (a favorite of mine to shoot) and life through your beautiful eyes, a gift that keeps giving, dear Kim. Thank you for sharing. May the New Year bring happiness, peace and joy.

What a lovely walk! I adore that shelf fungus, that is too cool! Thanks for taking us along, Kim

I enjoyed seeing all the interesting details of your walk through your eyes, Kim. I'd want to touch the fungus too. Coco must love these walks!
Thanks for the Christmas wishes. We did have a great time with the kids home. I hope your Christmas with friends was wonderful too. I'm sure your family missed you.

This reminded me of Michigan - and how there won't be water in the winter often for the dogs! I'm sure that Coco was glad to return - but it looks like it was a great Christmas Day walk. Aren't long dog walks just the best?

You sure captured "Winter in Ohio," Kim. I especially like the first photo and the one of the seed pod.