Anyone who sticks around here for very long soon discovers that this is not strictly a gardening blog. I am fairly easily distracted and I sometimes go off-topic, especially where nature or science is concerned. As a fair warning: This is one of those off-topic posts. And it might make a few people go "Eww!" (But it's also pretty amazing! :)

My boyfriend Steve often joins Miss Coco and I for our nightly walks, after volleyball games or after we have dinner at my place. Lately we have noticed quite a few leopard slugs making their way across the sidewalks in little trains of two, hooked together in the middle, like this: 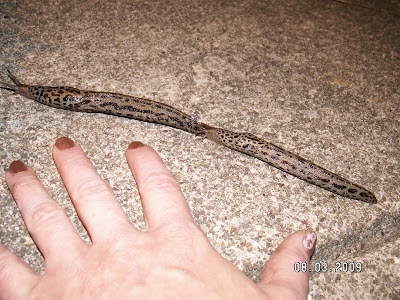 Slug "train" on my front sidwalk... my hand is included for scale so you can see how large the slugs are around here!
We suspected that this was part of some kind of mating ritual, or maybe a precursor to... and after a minute or two of Google searching, we discovered that we were right. Apparently, if a slug wants to mate, it will change some of the secretions in its slime trail to advertise its desires. If another slug picks up on this special scent and is amenable to the idea, it will follow along closely behind the first slug, touching, to let it know that its invitation has been accepted.

I had seen pictures of leopard slugs mating before, but during our research Steve and I also found a couple of videos that showed slug sex--you can see one at the Animal Planet site, here, or search YouTube for the British clip. I wondered aloud where the slugs on my front sidewalk were going to fulfill their quest... but we agreed that we were not likely to actually witness slug sex in my yard until my trees get quite a bit older.

And then, on Tuesday, we walked up to the house after volleyball and saw this: 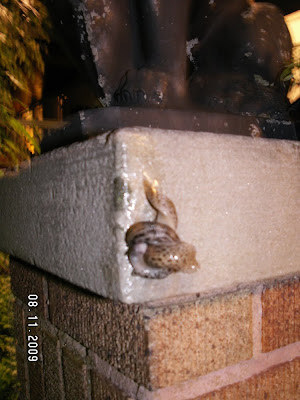 A tangle of two slugs. On a vertical surface. With a big blotch of slime sturdy enough from which to hang their trapeze rope. I was convinced that it could only be one thing: "Steve, look! I bet we're about to see Slug Sex!"

After coming over for a quick look, he turned to me with a grin: "I think you're right! So... we need to watch this. You're going to go get your camera, aren't you?" (See why I like him?!) By the time I fetched the camera--and the dog--the slugs had already started their descent: 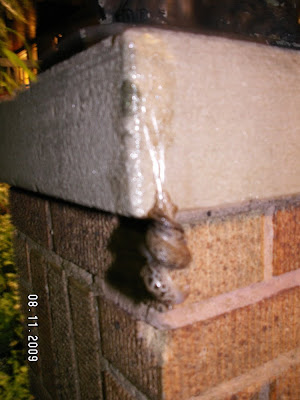 They didn't dangle nearly as far down as I'd expected. And for most of the descent, they stayed curled up like this: 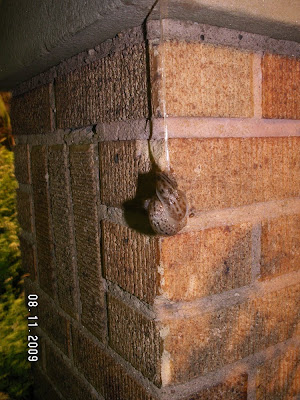 Once they were about 2-1/2 bricks' height down from the ledge, they stopped making their trapeze and started to uncurl and stretch out: 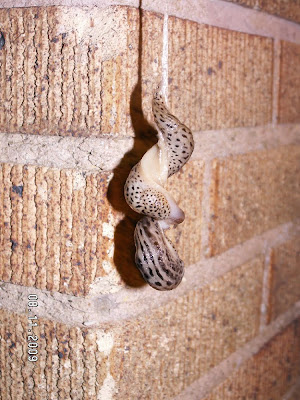 Then their male sex organs started to emerge. Slugs have both male and female sex organs, but they are not able to fertilize themselves--hence the need for these aerial acrobatics. The area of their bodies where all of the reproductive organs are located is called the mantle, and is located close to what we would think of as their "neck," as you can see here: 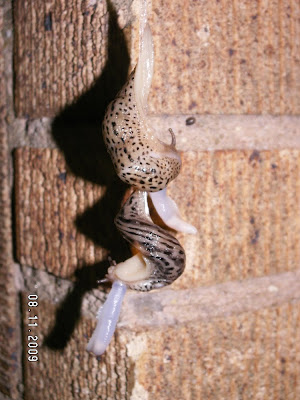 The male sex organs get longer fairly quickly, and start to drop straight down as they look to entwine with each other and swap sperm: 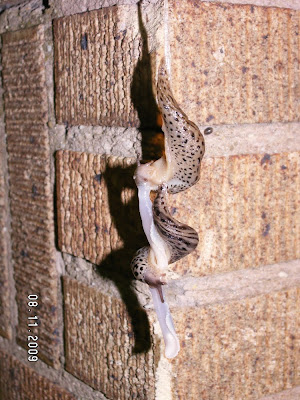 Unfortunately, I am not quite used to taking night photos on my parents' camera, so I didn't get a close-up shot of the entwined organs that wasn't blurry. Here is the best I could do: 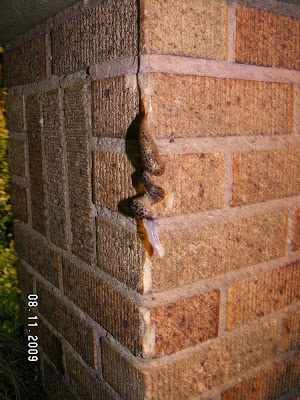 In the "slug sex documentaries" we watched, after the transfer was complete the slugs dropped down off of the slime trapeze and onto the forest floor. Maybe dropping onto concrete was a less hospitable idea to these slugs, maybe they've adapted to city living over the years, or maybe they're a slightly different species than the ones in the video clips. Whatever the reason, they curled back up once they were finished and their organs were fully retracted... 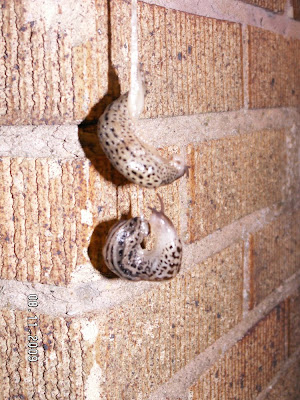 ... and then proceeded to "climb" back up the slime trail, to the top of the brick column: 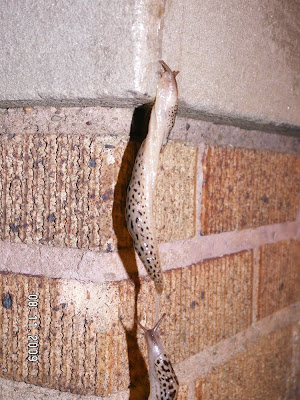 Once they arrived back at their starting point, one slug rested on the vertical slime blotch for a while, while the other continued a short distance onto the horizontal top of the stone slab to take a rest. (And probably to fertilize the eggs.) 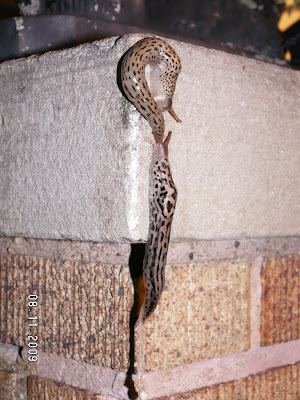 As I zoomed in on this last photo to make sure that I hadn't missed anything, I noticed a small circular "hole" in the top slug. A slug anatomy page told us that was the pneumostome, an opening to the slug's lung. The pneumostome is not usually open--the slug breathes through its body/skin normally, but when the slug is involved in strenuous activity the pneumostome opens to allow more surface area for air absorption. It's just about the size of the dot a pencil eraser makes if you dip its tip in ink, and you can see it just about 3/4" above the slug's head if you look: 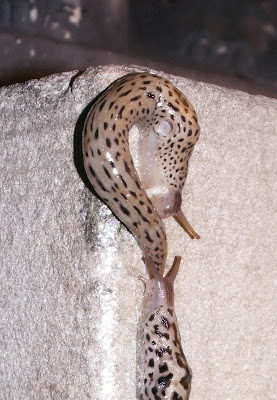 Well, that's all that I know about Slug Sex in my garden... and I'm sure that this post has left its readers with at least two key questions. So for the gardeners out there who are wondering: Yes, I peacefully coexist with the slugs in my garden. I rarely (if at all) see slug damage on leaves, so they only annoy me when I accidentally touch one and get that slime all over my hands. The slime is very hard to wash off... and now I know why: It's apparently strong and sticky enough to double as a slug trapeze!

The answer to the second question is also Yes: Steve and I did jokingly wonder if being camped out on the front steps, snapping photos of the big slug sex event, meant that we were now voyeurs! Lol.

But seriously, I am beyond excited about witnessing this amazing mating procedure, and being able to share it here on my blog. I hope that you all found it interesting as well... and that nobody was particularly grossed out. (Sorry, Mom! :) If you're not particularly amused at digressions into crazy animal behaviors, don't worry: I have been taking lots of pretty garden pictures this week as well, so we'll be returning to our usual green-and-growing theme here very shortly! Have a great weekend...

Oh my Gosh, This is great. I never knew such things happened in my garden. I mean, I figured it had to happen some time some place but just what takes place I didn't have a clue. Very interesting.

OMG!!! I never really thought about slug sex, but this really proves the saying, "It takes two to tangle" in a rather different way.

Very cool photography. How long did the entire session take? I'm trying to imagine how long you two were hunkered down on the sidewalk watching. I'm glad the slugs didn't seem to ming the flash.

Thanks for sharing. Very interesting and very cool too

I once watched a pair of snakes twine and untwine for what seemed like forever on the front lawn, fascinated.

Nicely photographed. I love garden blogs that wander about, so please feel to digress whenever something neat like this comes across your path!

Completely disgusting, yet oddly fascinating. I would have squished them in the act, but then I'm a bit overly protective of the Hostas.

You're not the only one who doesn't have a strictly "garden" blog. I suffer from eclecticism in a big way. I LOVED this post, so interesting. I especially liked the explanation about the pneumostome. If we all always stayed on one topic, the rest of us would not have the opportunity to learn new things.

I'm a voyeur too, check out this capture I got last year.

Hey, this was great. And so informative! Thanks for watching...

Now I know what the slime is all over my bricks. I have noticed over a period of time this slime, and have had numerous slugs crawling around at night. Good to know, thanks.

once saw squirrels have sex.. side of tree facing down.

by the way... did you get my e-mail about our newsletter? we hope to send one this week.

We witnessed Slug-amore once in Seattle and agree it is creepily fascinating, but that was years before the blog. Bet now we'd also see it as a potential blog post ;-]

It IS all about sex...thanks for the info although I do feel a little bit the 'voyeur' right now. More slugs...ugh.

What a great opportunity!
Amazing and disgusting at the same time :)
I'm glad you took the time to watch, photograph and share the fascinating (though unappetizing) details. Who knew?
The garden offers up all sorts of interesting stuff, doesn't it?

I just saw a couple of slugs doing this tonight, I was out in the backyard with my dog and flashlight, and noticed what I found to be 2 slugs dangling from my stone birdbath, I don't mind slugs, but this pretty much grossed me out, and I wasn't sure what they were doing so I removed them with a stick. I don't think I completely spoiled their mood, as it looked like they finished up on the ground. In my 54 yrs., I've never seen that before, and I really can't say I care to see it again, LMAO!!