Seriously, is this not one of the weirdest blog post titles you have ever seen?  It's definitely been a strange stretch of days, both garden- and cooking-wise, though, so the title "fits" my week pretty well!

The weirdness started on Sunday night, when I freaked out a little bit because the temperatures were supposed to drop down into the low 30s for the first time.  I had left my tomato plants up in the garden as a little experiment to see just how long into a Northeast Ohio November they would survive... but I had a LOT of green tomatoes out there, and I hated the thought of them all going to waste.  So I went out and picked a bunch of the largest ones left on the vine: 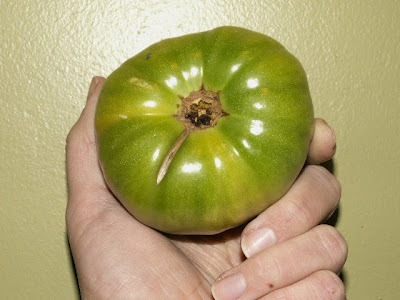 On Monday nights, I head over to Steve's apartment and we watch "Jeopardy," "Heroes," and "Castle," and just generally chill out while Steve makes dinner.  Sunday night, I told him that I needed to make use of some of my newly harvested green tomatoes, and offered to fry them up as part of Monday supper.  Sliced to about 1/4 of an inch, breaded first in flour seasoned with smoked paprika, sea salt and black pepper, and then in cornmeal... they were delicious.

On Tuesday after work, I noticed a distinct pear smell when I walked into the kitchen.  Last week, during a quick trip home, my grandma and I filled up a large grocery bag with fresh pears from her neighbor's tree.  Eloise doesn't do anything with the pears anymore so she's glad when someone takes them so they don't go to waste... and I'm planning to bring her a jar of pear butter as a thank you when I go home for Thanksgiving.  But Tuesday night, I skipped the pear butter and made this instead: 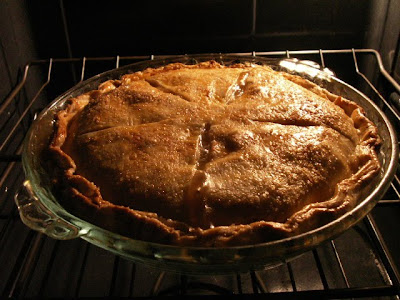 It's a mishmash of two recipes from Epicurious, Pear Pie with Maple and Ginger and Pear-Cardamom Pie with Almond Crust.  Steve and I tasted it while it was still oven-warm, and it was... absolutely amazing:  The flavors were  more subtle and delicate than I thought I was capable of producing in a pastry, and completely balanced.

The next day, though, I had a small sliver of pie after work and was surprised to find that it tasted completely bland!  In a panic, I tossed it in the microwave for a few seconds... and luckily that did the trick.  I handed out a few slices to friends with the warning that it needed to be reheated, but I'm still curious:  Why would both the spices and the luscious pear flavor itself disappear like that at room temperature?  Any of my foodie friends have a guess as to why the heat restored the flavor excitement?

Speaking of excitement, this gardener is extremely excited about a certain development in her indoor garden: 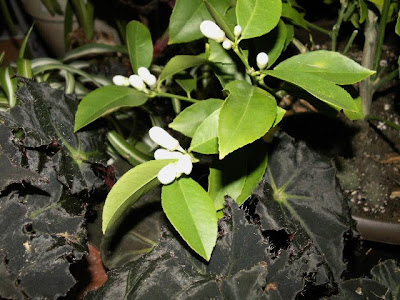 There are 51 (yes, fifty-one!) flower buds on my Meyer (Improved) lemon!  I'm sure that they won't all turn into baby lemons--and I know that the ones that do will not be ready to pick for a while--but I will definitely enjoy the flower fragrance in a few weeks.  And if I get enough to make even just one of the yummy-sounding Meyer Lemon recipes I've uncovered, I'll be ecstatic.

Hope that everyone has a wonderful weekend, full of similarly pleasant surprises!

Did you happen to note down the combined recipe?
I don't know why the temperature is so important, but I know our wedding cake and icing was totally tasteless fresh out of the fridge.

Even green tomatoes count as a crop, Kim - I'm jealous!

I can't remember the lemon tree - is it new? When mine blooms outside the bees pollinate it, but if the flowers open inside I use a soft artist's brush.
It does take a long time for the fruit to develop - the lemons begun last March are just about ready now.

Meagan, I didn't at first, but my friend Jane just asked about it via Facebook last night, so I typed it out and sent it over. (Good thing, too, because otherwise I'd never remember the recipe next time.) I'll forward it over to you. :)

I guess maybe the heat coaxes out more flavor? Or the cool/cold kind of "kills" it somehow? Hmm.

Annie, your memory is fine--the lemon is indeed new-ish! I "rescued" it in July when some of the more potbound tropicals went on sale at the garden center where I work part time, and then potted it up and proceeded to ignore it for the rest of the summer. It must have liked the neglect.

And I like your hint about using a soft artist's brush! Someone else said a Q-tip, but that you have to be extra careful and gentle with that... since I have artist's brushes laying around, and that seems like it would be much easier all around, I'm definitely going that route. Thank you.

The pear concotion sounds yummy. I would be excited too if I had a lemon tree with buds on it.

I can almost smell that pear pie which will soon be replaced by the scent of all those citrus flowers.

I can't even think about the pear pie. I am so jealous of the Meyer lemon blossoms! I have not been able to keep a lemon going, not that I've tried that hard. I would love to know how you do it.

My grandmother makes a pear pie to die for! Usually I think pears are "meh" but I the pie and the Art of French cooking pear tart with frangiopane has made me a lover!

BTW, do you treat your meyer lemon special in any particular way to get it to flower? I get such limited flowering and wonder if I don't expose it to enough cold?

Greenbow Lisa, it WAS yummy... so much so that I think I'm going to use vanilla and cardamom in my pear butter when I finally get around to making it!

Layanee, I KNOW. I'm more excited about the perfume of those flowers than I am about little Meyer lemons, even. :)

EAL, I wish I knew what to tell you--I think it's just that this particular lemon must have appreciated my special brand of neglect? I'll try to "take notes" as it grows and (hopefully) makes lemons, though.

persephone, hmm... you might just be on to something there with the cold. It's been a very cool summer here, and I didn't take the Meyer lemon inside nearly as soon as I thought I probably should have. Exposing Christmas cactus to some cold temps helps it to flower, why wouldn't the same be true of the Meyer lemon? I'll have to do some research.

Oh, and I definitely need to make a pear tart at some point--thanks for the reminder! :)

Very cool developments here! My lemon is jealous of your lemon-it got fussed into wet feet and dropped all its' leaves! Neglect and well-drained soil seems to be key thus far, IMO. Say, I have a proposition for you: I'll trade you my Pear Cranberry Struesel pie recipie for the one you made! :)

Is the pie more fragrant when it's warm? Could that be it? The way things smell plays a big part of how things taste. No fragrance, no taste. Try plugging your nose and comparing the taste of raw apple and raw potato.

Cats and dogs who won't eat sometimes will if you pour some hot water over their food because that makes it more fragrant to them.

Chuck B. and Lisa, I think you both are on to something! Chuck, I'm going to test your theory tonight when I get home on the cooked pears with spices that I made last night. And Lisa, I definitely have provided my lemon with both well-drained soil and neglect... lol.

(By the way, Lisa, I'll email you to trade recipes! Yum!)