This evening, I noticed a story running on several news sites about the temperatures in June.  They were the highest in recorded history across the globe, and our temperatures here in Northeast Ohio were no exception.  I rarely run the air conditioning, but when they're consistently in the mid-90s for a few days with little cooling at night... well, my Gardening Assistant looks like she's about to melt under all of that heavy Malamute fur, and that's when I cave in.

Thanks to the wet spring and the hot temperatures, almost all of my fruit crops have been promising banner yields.  I had to thin the peaches, and the raspberries gave me so much fruit that it was borderline ridiculous.  Tonight, at dusk, I picked my first peach: 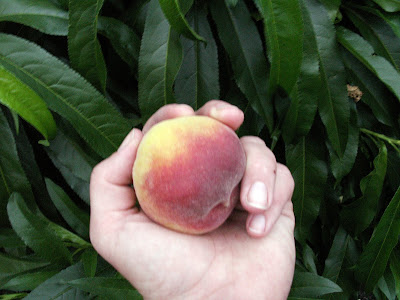 And I already found the first fruit on my container-planted 'Yellow Doll' watermelons: 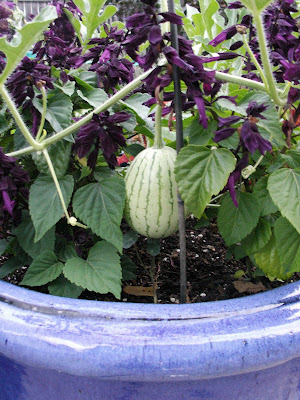 Guess it's time to start figuring out just how I'm going to support those fruits, huh?  They're a little smaller than a tennis ball right now, but will end up being 3-7lbs at maturity.  (Imagine that there was such a thing as a "single serving watermelon"... that's how the mature 'Yellow Dolls' will end up looking, size-wise.)


On the flip side, the heat and dryness of July has really decimated my blackberry crop.  On a single berry, about half of the little segments have dried up while the others mature.  I still eat them, carefully, but they're not really good for making jam and such.  And the birds and squirrels have been eating my grapes--partly for the juice in them, I would imagine.  The 'Concord' grapes are mostly okay, as there's a protective layer of chicken wire around the arbor that I've been too lazy to remove, but 'Himrod White' is almost completely picked clean! 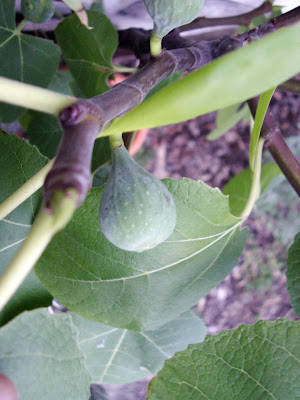 Hopefully the 'Brown Turkey' figs, pictured above, will keep enjoying the heat and will escape the critters' attention.  There are a good dozen and a half right now, and I would be happy to get at least several to harvest.  As always in a garden... time will tell!

Kim, Can you tell me more about the watermelon container plantings. So beautiful and I'm wondering what the purple flowers are?

Heather, I really need (and plan!) to do a separate post about the watermelon containers. I'm hoping to get to that this week, and I'll send you a link when they're done.

But those purple flowers are salvia splendens 'Vista Purple'... an annual that comes in flats at our local garden center, and which I admit I typically have overlooked in the past. Now that I've tried them, though, I think that they will have to be one of my tried-and-try garden standbys. :)

Watermelon in a bucket, what a hoot! Your peach looks yummy.

I love how you have so many fruits in your garden...it's one of my goals. My blackberries are just getting established so I hope to get some next year. And I have figs too...I'm anxiously awaiting them ripening. they will be my first fig harvest!

if is going to be this hot, fruit is a good thing to have around. congrats on your successes

Pretty cool, Kim - sure hope you get the figs along with the peaches, berries and melons. The peaches look beautiful.

Our 'Celeste' tree made a few figs - think the 5 we got makes us even with the critters. My fingers are crossed that a mystery melon still attached to the vine can get to maturity. It's now encased in one of those stretchy mesh bags that on-the-vine tomatoes come in, with an S-hook threaded through the top to suspend it from the compost-bin fence.

Greenbow Lisa, LOL! Well, it IS a little bigger than a bucket... *grin*... I'm really going to have to show photos soon to give you all a better idea of this whole experiment!

Leslie, mine too! I have a lot of fruit, but my goal for next year is to grow it all better. I really need to protect mine from the birds and squirrels, unfortunately... maybe a doggy door for Coco would help. ;)

Stratoz, good point. I wonder if marginal fruits will soon be hardier for us? And on the flip side, if fruit plants that require more chilling hours during the winter will fail to produce? Hmm...

Annie, the peach in question was still not quite ripe, in spite of its beauty. That didn't stop me from eating it anyway, of course--it had lots of flavor, just more of a tart edge and less sweetness.

Mystery melons are fun! I'm a little jealous--I seem to only get mystery squashes, which are not so much fun as the melons. :)

god could I go for a cold peach right now. I'll take your dry weather--15" of rain in the last 7 weeks, and stuff is leanign like a certain tower in Pisa.