Off to Put-In-Bay, where I plan to play a lot of volleyball tomorrow (hopefully)... but before I head out, I thought I'd post pictures of some strange tomato damage that I found this afternoon in my garden, in the hopes that my fellow gardeners could try to help me figure out the cause.  Here is the state in which I originally found the tomatoes as I walked around the yard: 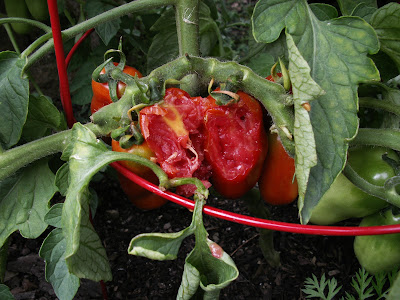 These tomatoes were at least a foot off the ground--way too high for something small like a mouse. It almost looks like the damage was caused by something that may have other large teeth, but have fairly flat teeth across the front.  Either that, or this particular animal is a very careful eater, because the gnawing is fairly even across the face of each tomato: 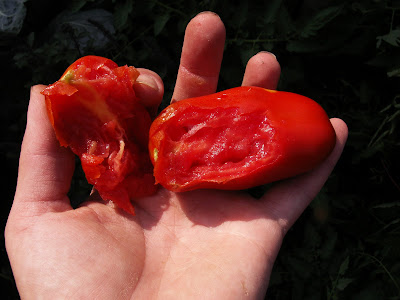 I asked my gardening assistant for her opinion, but she had no idea what it could be, either.  In fact, she was so guilt stricken disgusted by the sight that she had to avert her eyes: 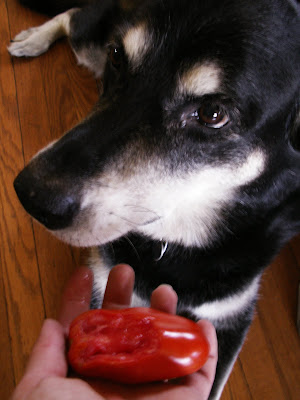 I know the feeling.  Oh well, at least she was kind enough to oblige me by eating the rest of the tomatoes, so they didn't go to waste.   In fact, they were gone in a flash of black and white fur... 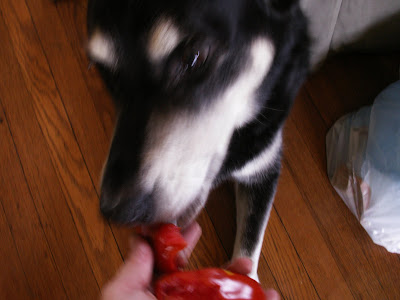 ... and white teeth, carefully hidden to make sure that I didn't notice how straight across they are in the front.  Hmm...
Posted by Unknown at 5:03 PM

My parent garden has the same problem. My guess is that it is a rodent, probably mice. No reason why they can't climb up the plant. Put out mouse traps and see if you get anything.

Poor Coco probably gets blamed for everything that goes wrong in the garden. Oh well, it is a rough job but I bet she can take it.

Aw, she's way too cute and innocent looking to be your tomato taster.

Got groundhogs? They're the ones chewing on my tomatoes this year, or so I believe. But I would guess squirrels (tree rats) or even real rats - they can take a huge chunk out of things.

Kim, The strike through + the look in your assistance's eyes had me laughing out loud! Thanks for the grins and have a good game~gail

I like your Holmsian deductive reasoning. Coco the omnivore, like our corgi. I wonder if dogs in the wild eat anything but meat or if this is learned behavior from living with us.

Liz and Entangled, I would normally think mice or chipmunks or such, too, but the neighbor's cat takes pretty good care of all of the rodents around here. Nope, I'm afraid that the creature in question is a whole lot larger... 90lbs, as per her last vet visit! *grin*

Garden Lily and Greenbow Lisa, don't tell me you two have been sucked in by that adorable "Who, me?" doggie act! :-D

Gail, thanks for the good wishes! We actually played really well--made it to the playoffs and lost in the semifinals. By the way, can't you just SEE the fake innocence in those eyes? "What? Tomatoes? I didn't even know you had those ripe tomatoes! Oh, but since they're already ruined, do you want me to finish--er, take care of them for you?" LOL.

Denise, oooh... that's a good question. I know that some abandoned dogs learn to be trash pickers, so I don't see why wild dogs wouldn't forage, too. But in Coco's case, it probably IS more learned behavior than anything else.

By the way, your comment reminded me of a funny conversation I once had with my ex-husband. He was horrified that I gave her some raw beef as I made dinner... and I was flabbergasted that he was berating me over such a ridiculous thing. I finally said, sarcastically: "Well, sure I can see why you're so concerned about the dog eating raw meat. I mean, I'm certain that Coco would cook her food in the wild!" Needless to say, we both dissolved into laughter at such a ridiculous thought, and the argument was over. :)

My dog picks melons and eats them. I think she had guilt in her eyes.

Layanee, Tucker steals MELONS?!?! That makes me want to go put a barbed wire cage around my tiny little watermelons--yikes!!!

Kim, my late perfect dog used to pick tomatoes just as they ripened and bury them. I'd find little dug up spots and know exactly what was in there. Good thing Coco is worth it, just as Zelda was.

Hmm ... never knew dogs liked tomatoes but my fav fresh veggie farmer has a dog who shucks and devours ears of corn. Have fun, Kim :)

Hi Kim, this was the first summer my dog Kahlo has been with me, so when the tomatoes were first ripening she would troll the ground under the plants for tomatoes that dropped and then she got smart and would pick them. She would take them, run away tossing them up in the air, all the while the tail just a wagging. I had a hard time getting upset with her because she would, in the end, eat the tomato and appeared to be having a blast.

Leslie, good point... it's mostly amusing, and she's definitely worth it. :)

Joey, I would LOVE to see a dog shuck and eat ears of corn! That's quite a task without opposable thumbs. lol.

char, Coco does the toss thing, too! I really want to know what that means in dog-speak. I just interpret it as, "Yippee!!!" for right now, though. :)