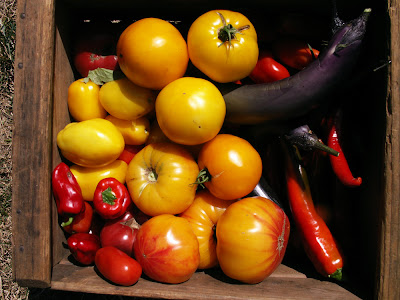 I've been busy harvesting in the garden this weekend, as you can see from the photo above.  The surprisingly zesty 'Italian Roaster' peppers (the long red ones on the right) are going ganbusters, but all of my bells are disappointingly small and thin-walled. But the tomatoes and eggplants are doing just fine in spite of this summer's drought.  The colors in the (old, trashpicked) sturdy trug above sort of remind me of the foliage colors in the mixed veggie-and-ornamental garden: 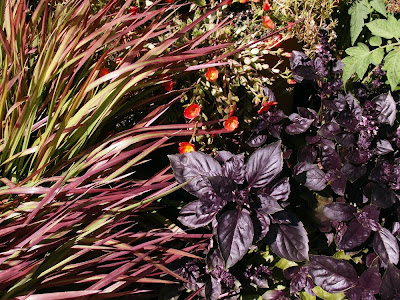 That photo was taken from a crouching position in front of one of the clay tile planters, which you could see dead center if it weren't obscured by bloodgrass, purple basil and portulaca.  The swirls of plant colors in this area even look cool when viewed from above: 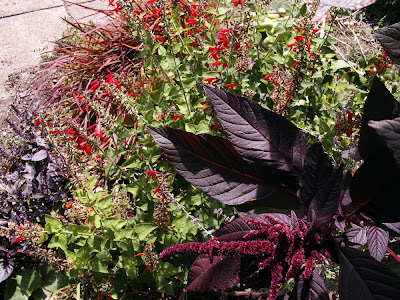 And here's a fuller shot from the front, so you can get a better sense of what all is going on here.  Bloodgrass, basil, cabbage, tomatoes, salvia, amaranth, oh my! 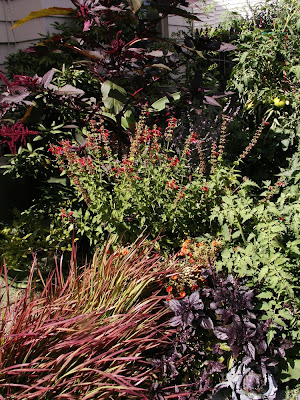 I thought that this might be the first summer without my beloved 'Hopi Red Dye' amaranth, because the seedlings were so late to emerge.  But they came up eventually, and now tower over my head in spite of the cutting back I did in August: 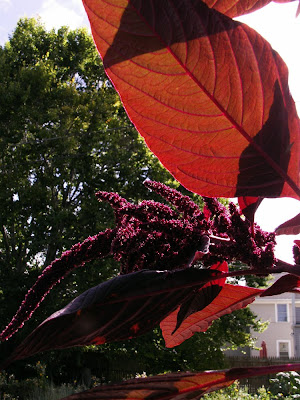 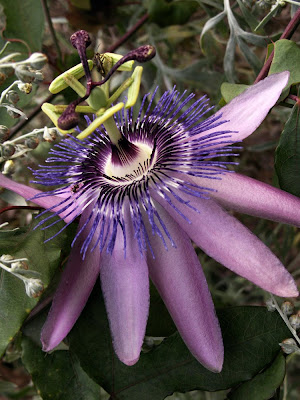 It is now making up for its slow start adding color through the artemisia: 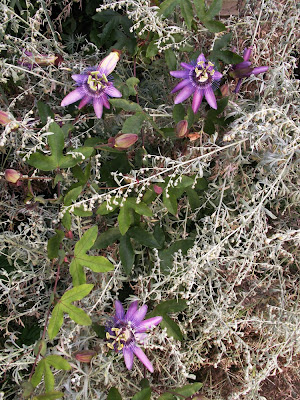 And all across the fence: 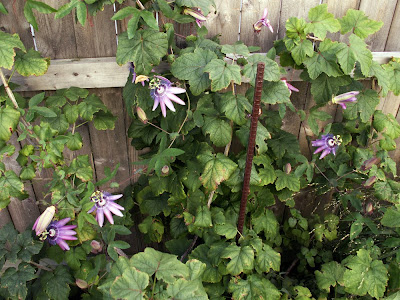 A slightly less wanted bloom is this: 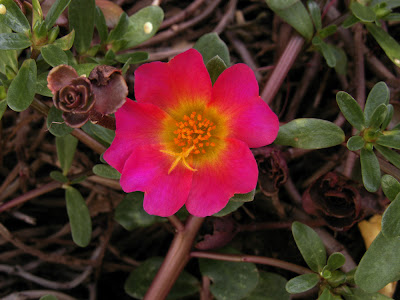 At first I thought that this explosion of purslane in my garden came from the common weed, and a dry summer... but this looks like the progeny of one of the fancy, large-flowering 'Yubi' portulacas that I have had in the clay tile planter for the last few years.  The individual flowers are the same size, but they aren't nearly as floriferous as the true Yubis.  Bummer.

Well, it smells like my latest batch of roasting veggies is about done, so it's time to post this and get back into the kitchen to cut some more tomatoes.  Hope that you're either getting all of your gardening chores done this weekend, so you feel both tired and satisfied... 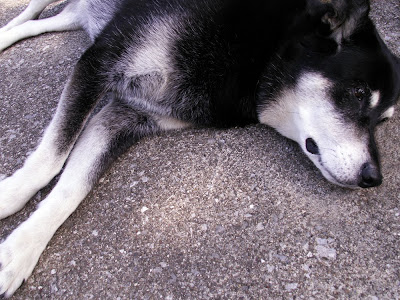 ... or that you're enjoying your trip to wherever the wind decides to take you: 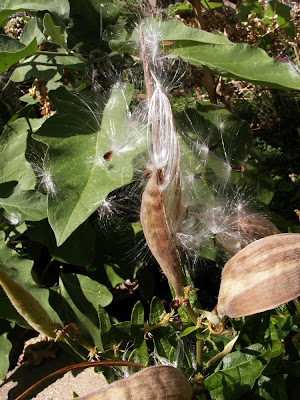 Either way, have a wonderful weekend!

Passion Flower?? Do you haul it indoors for the winter? Will it continue to bloom? Is it easy to grow? So many questions.. I'm just all giddy at the idea that I might be able to grow one of my all time favorite flowers. Indoors, or out.

Gorgeous vegetables. Do you have a favorite yellow tomato? I didn't plant any and want to choose a yellow for next season. I can smell the vegetables.

Fall seems to be the best time of year in your garden, with all the foliage colors and the plants tumbling over each other. The passion flower is awesome. (BTW, Coco's looking a little whiter these days. How old is she?)

Hey Kate, I left you a pretty detailed comment on your blog re: your passionflower questions... hope that helps get you started. (They're so interesting, aren't they? Like some beautiful, exotic Dr. Seuss flower!)

Layanee, 'Lemon Boy' was by far my favorite, and bright yellow. Want some seeds? I am just finishing drying a batch now, and have plenty to share--email and let me know. :)

MMGD, that's true... I guess my garden revels in chaos! lol. Coco's always had the white snout, and white dots above the eyes, but she IS getting white flecks all through her face now. (It's especially noticeable around the eyes.) And she's all old-dog-snuggly, often... it breaks and warms my heart all at the same time.

She's almost 9-1/2 now, which is good for her size. (90+lbs) 8-12 years is the general expected life span, so I'm hoping that her continued good health and our daily walks help give her a good life until the end of whatever time she has here with me. She'll be 10 on May 5th, so I think we might need to have a big "Cinco de Mayo de Coco" celebration for her!

love the warm colors of the veggies at the top of the post. Passionflowers now how cool is that!

I always enjoy seeing your veggies because I know you don't have a large garden yet you have a nice variety of veggies. That passion vine is gorgeous. I will have to pop over to Kates blog tosee your answers to her questions. I have a short clematis that has a similar bloom that I dearly love. Give Coco a pet for me. Luna is 8 now. I just mentioned to my DB the other day that we won't be able to watch her age via white around her muzzle since she is white all over. In our eyes she will be forever young.