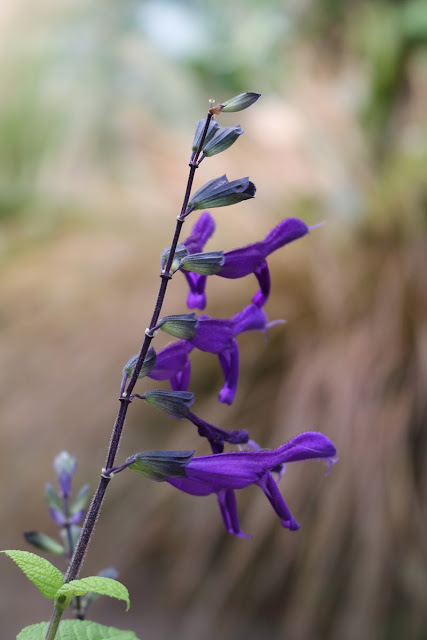 This is yet another better-late-than-never edition of Garden Bloggers' Bloom Day. I do know that I say that most months. But since I didn't seem to manage to post anything for July and August, I think this is a step in the right direction... no?

Above you see a one of my few new blooms.  It's a generic salvia guaranitica - NOT a named 'Black & Blue' plant like I usually buy.  I think that I will try to stick with the unnamed version in the future, as this plant has greatly outperformed B&B  in spite of a coolish summer when I would have expected it to do much less. 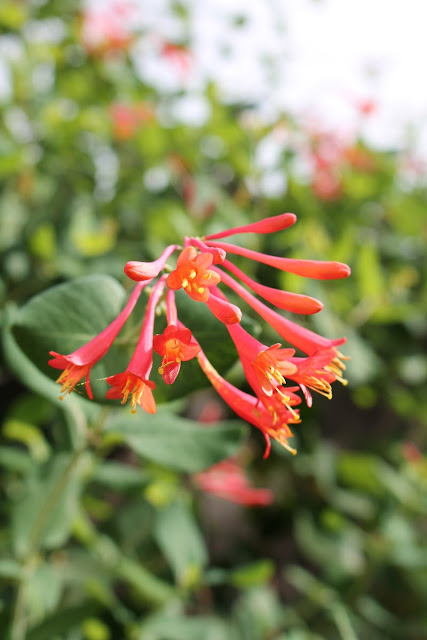 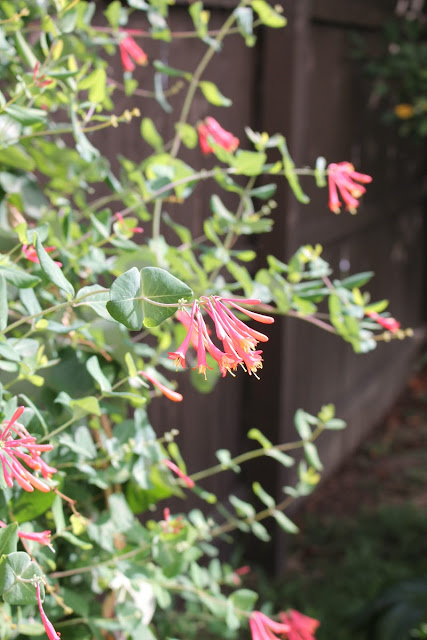 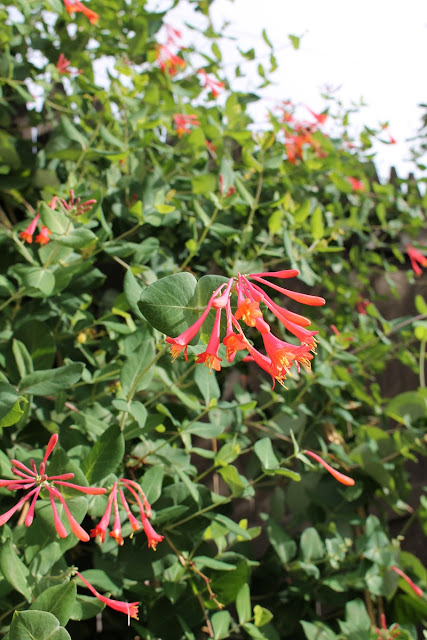 Yes, I'm still in love with the native (to the U.S., if not to here exactly) honeysuckle, lonicera sempervirens. (I blame the wonderful Annie in Austin for introducing me to this object of my obsession.) My hubby has been working on propagating it for me, so it can bring a baby of this plant with us whenever we go.

Instead of propagation, I'm just flat out going to dig up one of my 'Albury Purple' St. John's Wort bushes before we put the house on the market. There are two reasons for that:  1) It's patented, AND 2) The front yard is getting a little crowded anyway. I just love it when the yellow flowers and red berries appear together like this: 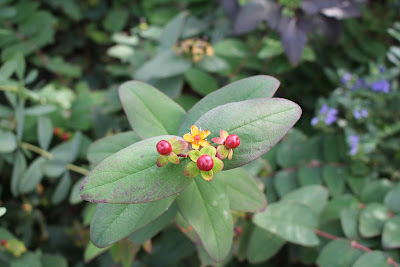 Speaking of the crowded front yard, there are quite a few things in bloom there right now.  Blue caryopteris and 'Hameln' pennisetum are vying for attention: 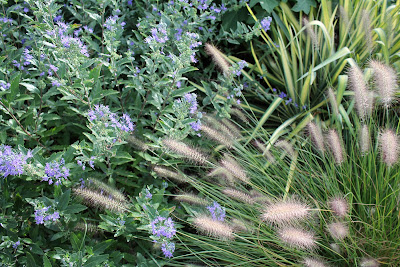 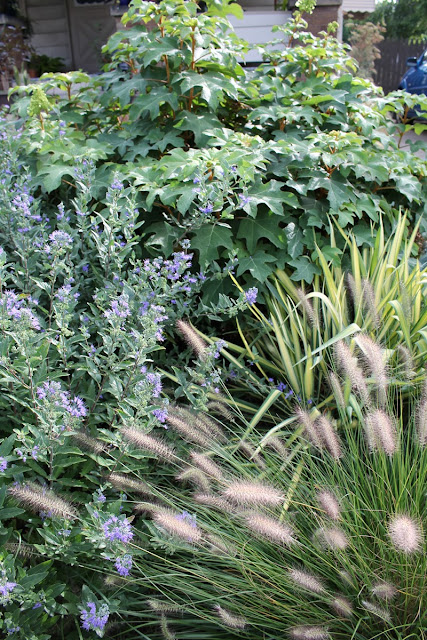 And the whole mess of Japanese anemone (mostly hidden by the now-huge Japanese maple and random miscanthus) were almost finished blooming before I even noticed them: 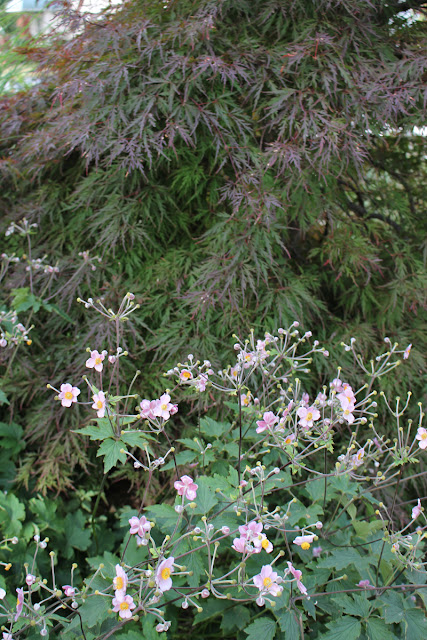 The bright side of having to go to the neighbor's yard to take their picture?  I realized that there IS a good side to this ill-planned hanging basket of fuchsia and philodendron.  Check it out now because I am NEVER planting this fuchsia again:  (Next year, I'm going back to 'Bonfire' begonias!) 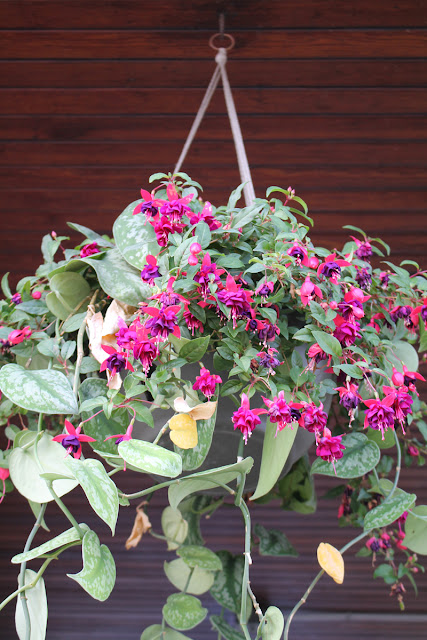 As I came back around to the front porch, I saw that the 'Sparkling Burgundy' eucomis, which sprawled alarmingly in August at the height of its bloom, had bravely thrown up another smaller bloomstalk: 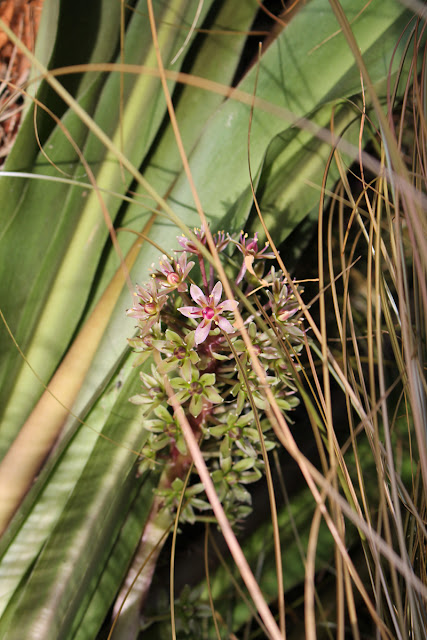 Inside, one of Steve's sensitive plants (mimosa pudica) is in bloom. Strangely, the ones that went outside never flowered at all this year. Just the inside plants: 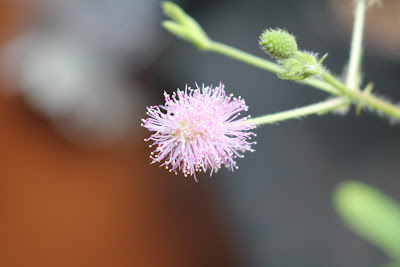 In the back yard, the 'Hopi Red Dye' amaranth, recently cut back orange butterfly weed, and Brazilian verbena are all in bloom.  But the highlight of the garden right now is this hot dwarf canna at the edge of the blue pot.  I picked it out for its purplish leaves (now looking a little worse for the wear) but love these in-your-face blooms next to the silver sage. If you look closely, you can see streaks of orange on the insides of these red flowers: 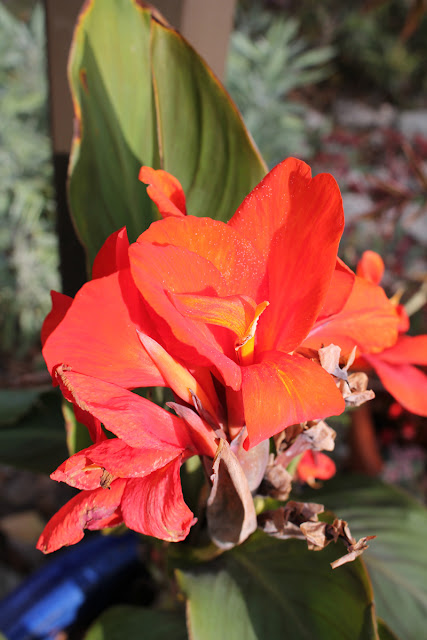 Outside of the highlights above, other September bloomers include 'Matrona' sedum, 'Rotstrahlbusch' panicum, 'Sioux Blue' sorghastrum nutens, 'Whiskey' wax begonias, 'Hab Gray' sedum, 'Red Rocks' penstemon, 'Purple Dragon' lamium, and a few hostas that I have yet to hack.

For more of what's in bloom around the world, check out Carol's September 2013 Bloom Day Post as May Dreams Gardens.
Posted by Unknown at 11:32 PM

Your blooms were worth waiting for. I haven't got my GBBD post done yet either. It is still droughty here. UGH I am watering just to keep things alive. Even the hellebores are laying down. I have never had to water them before. I am watching to see what will give up. Your plethora of blooms is one of the things that keeps me out there watering. I know this drought will pass. Happy GBBD.

To this day, I bemoan the fact that I didn't dig out and take cuttings of more of the plants in my former garden. I took some but, in the intensity of the sale process and moving, I left a lot behind. I think you're smart to prepare ahead of time.

Hey, I had better go check my Eucomis. I have yet to see a bloom. Actually, I love all of your blooms. Who wouldn't? Happy GBBD.

Greenbow Lisa, I'm hoping that the last few weeks have been a little wetter for you! (And if not, at least you have that gorgeous new garden - with the fork-and-spoon arch that I covet - to look at! ;-)

Thanks, Kris! If it makes you feel any better, the last time I moved, I probably took a bunch of plants that I shouldn't have bothered with at all. Things like ligularia and perennial geraniums that completely melted out here in my dry garden. So maybe you saved yourself a little heartache, too? ;-)

Layanee, I missed approving your comment earlier--sorry about that! Thanks for stopping by...hope you found some blooms on that ecomis, too. :-)