The new shrub definitely went in a whole lot easier than the willow came out! It's rather hard to see in the slanted morning sun, but the plant I chose for the featured corner of my "back bed" is a purple ninebark, physocarpus opulifolius. This particular cultivar goes by several different names, including 'Diablo,' 'Diabolo,' and 'Monlo': 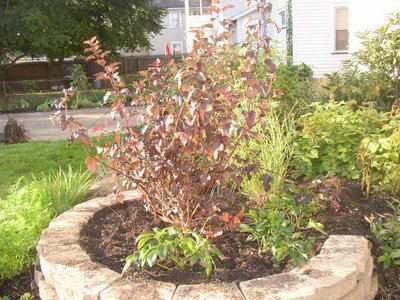 I've admired the purple ninebarks for a couple of years now... and when I saw one darkly glowing behind a fun piece of garden art over at Empress of Dirt, my admiration was further inflamed into desire. My only problem was figuring out where I could put it in my small yard, especially since my google searches turned up wildly different reports of mature size.

Where it is, it can get to its largest reported size of 8-10ft. tall and wide if it wants. It can also stay closer to the smaller reported size of 6ft. without ruining the look of the garden. It adds the dark foliage that I love to play with, and I can handle the pinky-looking flowers for a short time since they mature into lovely reddish clusters.

I have it underplanted with the same hellebores that I pulled out to get to the willow roots--we'll see if they survive or if they're as fussy as reported. There's a panicum virgatum 'Rotstrahlbusch' planted on the other side of it, as well as 'Little Spire' Russian sage, a rose, a few 'The Blues' little bluestem, and some dwarf Siberian iris. I hope that the dark foliage of the ninebark will help the lighter purple/blue plants really pop.

I need to figure out a good trailer for the front edge of that circle, though. I've already used thymes under the Japanese maple in the front, so I would like to find something different... something with a nice dark green that will complement the purple ninebark leaves. If it could be something that flowers in the summer (after the dwarf iris in front if it is done) that would be great--and I'm not married to the idea of using a perennial.

Any suggestions?
Posted by Unknown at 6:00 PM

Just how 'trailing' does the plant have to be? Would Ceratostigma plumbaginoides, [sometimes called hardy Plumbago] work for you? The flowers are blue, the leaves dark green, but there's a reddish cast to it. It's perennial, but would probably die back in winter.

Oooh... another plant that I've long wanted to include in the garden but haven't found a place for quite yet! I would love to try it, but I never thought of it as a trailer. Do you think that if I planted it close enough to the brick circle it would at least obscure the edge of it? That would be close enough, really.

When you asked for a trailer with dark green leaves, I was going to suggest vinca (aka myrtle, aka periwinkle), but then you talked about flowering in the summer, and it wouldn't give you that.

Have you considered something with a bluey-green foliage rather than dark green? (When I look at your composition, that's what comes to mind for me.) NOT that I have any suggestions for you. In fact all I can think of is creeping juniper (but I think that's because I'm biased -- you've seen my garden).

Hmm, I just found Red Valerian (Centranthus ruber) by googling. There's a wonderful picture of some interplanted with iris, located at

I am mentally inserting ninebark leaves into the mix and liking the result (that's just me), but it's not really a trailer and it looks to be blooming with the iris rather than after, and it seems to get pretty tall, so maybe not.

Sorry to ramble on. I love what you're doing with that area and I look forward to seeing the result when you finally decide how to finish it off.

How about the California and Arizonia Native Fushias, also called Zauchnaria and Epilobium? Some of them trail, some have dark leaves, and they bloom in either red, orange, or yellow, durring the late summer and fall. If you hadn't said dark foliage I would suggest good old sweet alysumn. Some of the trailing lobelias meet your needs - I think - but they may be too common a plant to suit your fancy . . . Anyway - thanks for stoping by my blog - and Yes Tom's site is awesome!

Karen, great minds think alike--but my bluish foliage is on the other side of the ninebark as you look at it in the photo! :) I have little bluestem in the ground (a step down from the circle) and 'Little Spire' Russian sage right next to it (kind of forming a triangle with it and the switchgrass)...

That's why I was looking for some dark green to go in the empty spot at the left of the circle--to set off the purple and blue. That said, I do like the centranthus ruber with the iris--maybe I could put it right next to the dwarf iris in the ground. Hmm...

Harvest, I am drooling over those California fuschias after googling them! I think I have a great place for them in the front yard, actually. Or I could do containers since they would be annuals for me... oh, and you're right about the lobelia being too "common" for my taste (I'm blushing with embarrassment at my snobbery here!) but I might end up using them next year out of desperation. :)

I think I need to take a picture of this are from the other side (my normal view) and post it. If for no other reason so that I can look at it myself. Too dark now, but maybe tomorrow...

Ninebark, hmmm . . . it looks best if it has been pruned from "the inside-out". keeping mature trunks to a minimum. Actually mature Ninebark are not that attractive. They look best in the shrub border or along the edge of the woods, my .02c

Hope things are well nice to see you over at my site once and awhile.

I planted Diablo Ninebark (brown) and 2 golden (their foliage chartresse green)glows in garden! I did a "Chocolate" post have a look there you"ll see mine and brown foliage from a trailing annual a potatoe vine I think
it was..you can get the chatresse green or the brown foliage I planted both as fill ins in front of the ninebarks.A brownish foliage ground cover with delightful blue flowers (see my most recent post the frog photo)Ajuga (choc.chip)may be what you want.I would do a choc. them around this ninebark..there are chocolate scented cosmos!!Have fun!NG

Harvest, I found one that's hardy to Zone 5!!! Yippee!

Rick I wish that I had woods in which to site it. :) This is hard to explain, but in the end it will be a member of a shrub border. It looks as though it's featured right now because I left some of the block there--I like the elevation change and it will add some winter interest--from when that spot was the featured corner of the bed, though.

Me too, lisa! I think I can fit that one into a smaller area later, though. :)

naturegirl I did enjoy that Chocolate post a while back. I already have the ajuga in my shade bed, and I really want some of the chocolate cosmos--love that chocolatey red flower! I think I still want to put in some dark green here, though. Hmm.

I've considered ninebark for awhile, but haven't taken the plunge and planted one. I don't have a suggestion on the trailing plant, but look forward to more reports on this shrub.

Like Karen, I was going to recommend periwinkle... and I know it's considered a weed, but I like ground ivy too. :)

Your ninebark looks great - it's going to be fun to watch and see just how big it gets. :)

My mother calls it "sevenbark" and I always wonder where the other two barks came from whenever anyone else talks about it. ;)

Since you commented on my recent post, I know you saw the "trailing" plant in the basket-ajuga! I never realized it would trail like that, but it's either trying to "make a getaway" from the planter, or it will trail when given the chance....kinda cool regardless.