My Head Spun Around...

Okay, maybe it didn't. But I definitely felt like I was possessed as I tore through the back bed last night. I didn't plan to start ripping the bed apart at all--I just kind of snapped as I was looking at it.

See, the area where I put in the purple ninebark a week or so ago is starting to look good already. In front of it, the 'Little Spire' Russian sage has rebound once it escaped the shade of the amaranths that had towered above it. I threw an unnamed hosta in the open space beside the perovskia until I can figure out what dark-green-leaf plant I want there permanently. I kind of like the play between those three things and the still-small 'Rotstrahlbusch' panicum virgatum to the left. 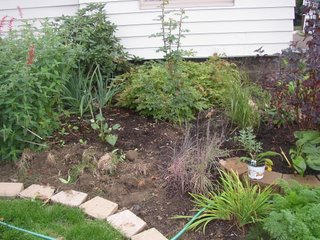 In fact, the more I looked at the area I liked, the more the rest of the bed just started to eat at me. There were so many things in temporary places--like the little bluestem, which clashes with the Russian sage--and so much unevenness. I tried to mentally move things so I'd have a plan for the spring, but even that wasn't helping... I finally couldn't stand it anymore and went to grab the shovel.

The picture above was taken midway through the carnage. I had hacked out one of the pineapple sages, dug out many tall iris, and transplanted a hollyhock that I'd started from seed. The rest of the pineapple sage, all of the other annuals, and the carrots would also come out before the sun went down, and I'm finally down to mere perennials and shrubs in that bed.

So it looks absolutely terrible now, but I can finally see what I'm working with and start moving plants accordingly. Out of chaos will come better order, but I must admit that I'm still a little stunned by all of the demo work that I accomplished yesterday. Does anyone else have, um, "episodes" like this in the garden? Or am I alone in my pseudo-artistic temper tantrums? 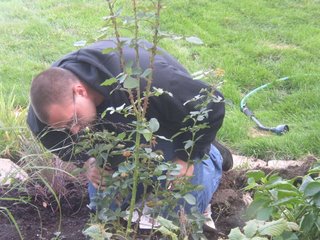 Lest you all think that I was just cranky and no-fun all day yesterday, I did have some amusement as well. Brian decided to go outside and closely inspect "his" rosebush... the one he brought me from Home Depot on a whim because it was so beautiful. (For that reason alone, I think it's gorgeous even though the flowers are... yes, pink. *sigh*)

He found some infected leaves on the bottom of Ms. Clair Renaissance, so he went back out with a sharp implement and a plastic bag and commenced removing said leaves very carefully. It was very cute, as he approached it as a bonsai: Look, consider a cut, look more, and finally make a cut. I couldn't resist taking some pictures of him through the picture window. He doesn't read my garden blog, so he probably won't know that I'm posting them... but isn't he cute? :)
Posted by Unknown at 8:00 PM

I've been trying to come up with a pleasing arrangement of plants in my new garden bed, and in the process of doing that I felt like ripping apart other areas and really moving things around, but the problem right now is weather. If I took things apart, I'd never get it all back together again before the next rain shower started.

I hear you, Karen... I like working and transplanting in the rain, but the ground here is getting to be a little too saturated--even in my mostly-sandy soil. It clumped up on my shoes last night as I walked in the bed, so I took that as a sign that it was too wet to mess with. Instead, I worked on the lasagna beds for next spring.

Oh yes, he is cute, but a little bit shy like Mr. Wonderful! I can not see his face exactly ;-)

Yes, that is cute. Let us know how Ms. Clair does.

Adorable. And no, you are not alone in the 'tear it all out and start over' catagory!

Sounds like you're having fun! You may want to plant some garlic with that lovely rose. It'll keep the plant healthy. :)

IF we ever get any rain, and IF our daily high temperatures fall into the 80's instead of the mid-90's, my plant rearranging will commence, too.

Even after decades of gardening, I still have 'episodes' when I just can't stand things to stay as they are - move OR die/move AND die - it doesn't matter as long as they MOVE.

"EPISODES"? Heck, I "go Taz" on my stuff everytime I move plants! It's kinda like, "Well, since I have the shovel out..." I moved a couple hostas in one bed, and I still need to scoot a couple other plants over, and it's eating at me....I anticipate my OCD will cause me to sleepwalk and dig if I don't take care of it soon...film at 11...;) P.S. your man is WAY cute...awesome he shares your interest!

Sigrun, I thought about putting a picture of the rose's bloom in front of his face like you do with your Mr. Wonderful, but then I decided that he was hard enough to see anyway! lol.

Christine and Jenn, thanks! :)

JLB, funny you mention that as I am currently stalking my garlic order via the UPS tracking links!

Annie you're absolutely right: I didn't care if they moved and died as long as they moved! Happily, nothing has died yet, though... :)

Hey...I got to thinking about trailing plants from our previous posting exchange-how about creeping thyme? It does well for me and cascades over ledges and rocks quite well. High Country Gardens also has a nice cascading plant, "Cascading Ornamental Oregano"...should grow well in your zone-looks cool, too.

Lisa, I LOVE that idea! I've actually drooled over that before in the HCG catalog (but really, I drool over almost everything in there) but I was really thinking I wanted dark green foliage.

Once I went back to the HCG and then googled it, though, I was completely sold. It totally fits my needs for quirky plants, xeriscaping, incorporating herbs, keeping the bees happy, etc. YAY!!!

Oh, and I'll just move that dark green hosta down to the next level and let the oregano cascade down onto it... *contented sigh*

Encourage him Kim, we need more men to break into bloom and get out into the garden. He might even start a blog.