The Year of the Spider?

Lots of people are having run-ins with spiders this year. I've seen more of them in my own garden this fall than I ever have... but none of mine are quite as big as those that Carol's sister is hosting. I admit that I do have a favorite spider amongst the denizens of my yard. I don't know how well you can see the web in front of my leaded glass window in this picture, but a 7-legged spider has taken up residence there. (Yes, 7... his left front leg is missing, but that doesn't seem to slow him down a whole lot.) 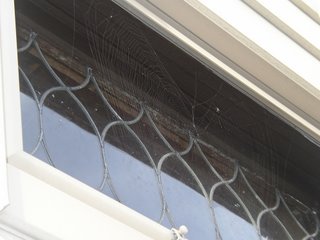 The storm window was removed in early June so that I could repaint the window sill. I stripped off the old cracked paint, primed, and got two coats of the dark brown paint on before we hit a rainy spell. The only steps left were to clean the paint spatters (some from me, some from previous owners) off of the glass with a straight razor and then carefully add a final coat of brown.

By the time I got back up on my ladder a week later, the spider had moved in. I didn't think that he was going to catch much up in that high window--it's a good 10ft. off of the ground--so I decided to finish off the other two and then come back to this one when he'd left for buggier pastures.

I'm still waiting for him to leave, in fact... but at this point it seems as though he's got a lease through the first frost. He travels the web during the evenings, but during the day he crawls up to the top of the web and hangs out on a little spider-sized "shelf" that the inside of the storm window provides.

I like to stand on my stair landing, just inside the window, and check on him as he naps the day away--he looks so snug and comfortable there. I haven't been able to get a good picture of him, though, because he's very camera shy and the old glass is uneven enough that it distorts anything I try to take from the inside.

So I'll just enjoy my temporary pet spider until it gets too cold for him... and postpone my plans to finish that window until next spring.
Posted by Unknown at 6:25 PM

Garden spiders are fine... it's the big, huge, wobbly, hairy kind that give me the willies! yeesh

It has been an interesting year for high population of 'critters' in the garden. I have had an influx of spiders. And last week I set foot on the sunny patio to be surrounded by non-poisonous Eastern Ribbon Snakes--probably 30 of them. Looks like you have quite a nice spider. Yeah, the window can wait.

My spiders are everywhere, much to Granddaughter's horror. She likes watching the movie "Spiderman" again and again, but has to have Daddy check repeatedly each night that there are no spiders in her room :D Any tricks to getting a good photo of their webs?

After i took a spider pic i noticed webs on all shrubs and tree's.Im waiting for a frosty morning to photograph them..i have seen lots of garden spiders.My fav one has moved on now somewhere...

"The itsy bitsy spiderrrr". Yes, I've noticed a lot more spiders. I walked around my own house the other day and noticed several big webs.

I've also had more garden spiders than ever this year...although they have slowed down now. And, as always, more than my fair share of black widows...I have to do the weekly 'black widow check' on a number of popular spider venues...and I never reach in any cozy spot without gloves!

I can handle the big fuzzy spiders, jlb... but Leslie, you can keep those black widows! We don't have them here, but there have been more and more brown recluse sightings in the area as temperatures warm up over the years.

Kati, I don't... it was hard to get any picture of the web in that dark window hole, and I still don't feel like I did a good job of it. Maybe as Snappy says we should wait for a good frost--but by that time the spiders will be disappearing. :( By the way, cute story about your granddaughter. :)

Judith, how cool! I like spiders, but I really love snakes... I really wish that I could host some of those in my garden.