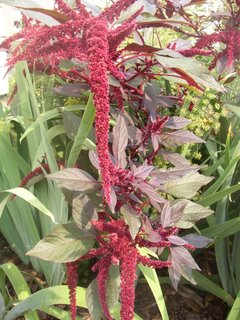 In early March, as I cut milk cartons and leftover plastic bags to make more winter sowing containers, I thought back through previous seed sowing adventures. In 2004, I had been excited about direct sowing Love-Lies-Bleeding (amaranthus caudatus) as well as a hybrid amaranth called 'Hopi Red Dye' that was reportedly used by the tribe as a ceremonial coloring for cornbread. None of the seeds had germinated.

On a whim, I dropped my scissors and pulled out my old seed packets. I did find some seeds in the bottom of the 'Hopi Red Dye' packet, so I prepped a couple of extra containers and scattered them across the top. All of the amaranth containers showed germination a few weeks later, and I planted out more than a dozen hunks of seedlings in the late spring. 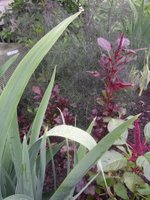 By the time the iris were done blooming, the amaranths had started shooting up out of their seedling clumps and some were even forming flowerheads. I pinched out the green ones but left all of the darker-foliaged seedlings, figuring that the weakest ones would die out on their own. That did not necessarily happen, as I ended up cutting down thick individual stalks growing a mere inch apart during fall cleanup.

My one regret with my 'Hopi Red Dye' is that I did not fully explore its culinary uses. The plants were so fascinating ornamentally that I simply sat back and enjoyed the show. The iris appeared to help keep them from tumbling down onto walkways, and they fraternized freely with everything from miscanthus zebrinus to bronze fennel. 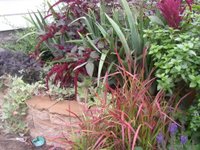 When a stiff wind felled some of the more top-heavy specimens, I discovered that they made great garden decor and were a favorite of the birds in the early winter as well. A few branches are still hanging in my kitchen, adding some interest to a plain green wall and the doorway to my basement stairs.

I will be growing the amaranths again in 2007 for sure... but right now I have my eyes on trying the gorgeous, golden 'Hot Biscuits' instead of doing the 'Hopi Red Dye' again. 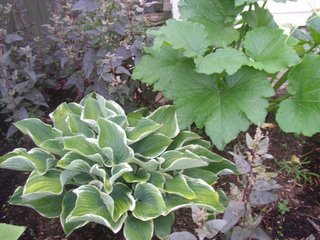 "Ruby Orach Mountain Spinach" was another winter sowing success story. Really atriplex hortensis var. rubra, the young leaves taste best fresh. I tucked in wintersown seedlings here and there in the garden, nestling their reddish purple leaves next to 'Paprika' achillea, grasses, and a variegated hosta. The leaves were particularly fun to check out after a rain, as the water beaded on them like it does on alchemilla mollis.

I've heard that you should cut back the flowerstalks before seed can set, because atriplex hortensis has a reputation for reseeding prolifically. I followed this advice in the front yard but let the backyard plants go for the most part.

I wouldn't mind some reseeding there anyway, and would gladly add more to my spring weeding chores in exchange for having enjoyed their bleached, wheat-colored skeletons all fall. I may buy some additional seeds this winter just to ensure that I get a few plants... even if I have to overlook how they turned a distressingly bright pink in the late summer. 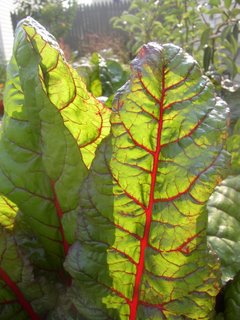 One last favorite in this category is 'Rhubarb' Swiss chard. All summer, the leaves caught the sun and glowed a bright golden green. The thick rubbery leaves provided good contrast for everything from the grassy foliage of dianthus to the soft, fuzzy silver of 'Newe Ya'ar' culinary sage.

I feel like I should think of this as an "ornamental edible" instead of an "edible ornamental," though, because I ate a whole lot of it this year! 2006 was either a good year for chard or I have been guilty of underestimating it.

I frequently sauteed it in a bit of olive oil and a lot of garlic, and served it over whole wheat pasta with some asiago cheese for a quick supper. By the end of the summer I had acquired a taste for eating the younger leaves raw while puttering around in the garden.

I had plans to harvest the remaining chard at the end of the season and follow Patrick's advice on dehydrating it for later use. But I so enjoyed the leaves as they turned a dark inky green in the fall that I never did get around to picking it. I am definitely growing some type of chard next year, though--maybe one with yellow/white veins. And if I don't like the way it looks, well... that just means I'll have to eat more of it!

Okay, I want to come and see your garden next year!

Hi Kim,
We've grown the Ruby chard along the front edge of the vegetable garden - very decorative, and love the way light shines through the leaves. It seems to me we tried the golden/veined one, too - but think it was one of those yellow variegated plants that look as if they are diseased or in need of nutrition rather than looking good.

If you sow chard 'Bright Light' you'll get an interesting mix of yellows, white, reds and pink tones.

Fun review! I enjoy seeing what suceeds/fails for other gardeners...thanks!

Wonderful photos. I also like this dark leaved plants, Amarant I habe in three colours.

Yes, there are lots of great colors to choose from with chard, consider the bright pink or orange ones, or the multicolored ones like John suggested. Chard also freezes well, just saute it with the olive oil and garlic first.

It's great to think back on the past year, isn't it!

k-oh, come on over--but I'll want to stop by and check out your new vermicompsting bins, too! ;)

Annie, I wondered about that with the Swiss chard, whether some of the yellow and white veined ones would look sickly. Hmm...

Deepak, thank you for stopping by my blog!

John, thank you for the tip--I'll have to go check that out.

Lisa, me too! And I hope that by posting this I'll also remember my own successes and failures better while I'm planning in the winter.

Patrick, you are making me drool... I think I may need to go out and see if any of that chard that's still out in my backyard is saute-able!

You have no idea how much this post made me wish it were spring!! I've considered growing 'Hopi Red Dye' before, but I wasn't sure....now I think I might give it a try next year. I have a bed that is almost all irises that is just beyond boring after the blooms are gone.

I grew Bright Lights in the garden this year. The yellow and the orangey stems are every bit as striking as the red ones. I may copy your use of it in the flower beds though. They are beautiful and mine were hidden in the garden. They are actually still going strong and the chickens greatly appreciate it.

Oh, I have a lot of catching up to do on your blog. What a beautiful review! I am enjoying every minute.

Great garden. Your bloodgrass looks pretty much like mine tho healthier. Prob. gets more sun. The swiss chard looks ornamental enough to be in with the other plants!

Great garden. Your bloodgrass looks pretty much like mine but healthier. Prob. gets more sun. The swiss chard is ornamental enough to be in with the other plants in your garden!

I was at the Whole Foods store the other day and a woman was asking the produce guy how to prepare the swiss chard she was holding. She said she wanted to try a new kind of vegetable. The produce guy wasn't much help and didn't seem to know much about chards. At the very least they should hire people who have actually eaten the stuff they sell especially when they tout organic veggies. It's hard to believe our experience in eating vegetables are so pedestrian or parochial. Not knowing what swiss chard is or how to cook it? c'mon.

Ok, off my soapbox.

Enjoyed your blog. If you would like free diet tips please visit Weight Loss

Nice blog. I will keep reading. Please take the time to visit my blog about loss weight program