Ah, They're So Cute When They're Young... 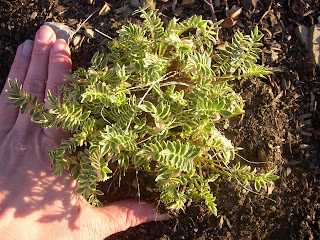 Some women swoon when their loved one surprises them with roses. (I never swooned, but I was touched by the gesture once.*) As far as I'm concerned, a boughten bouquet has nothing on emerging spring foliage in terms of excitement. Inspired by Colleen's picture of emerging bleeding hearts, I went around my garden and photographed a few of my current favorites to share. My hand is in each one to give you an idea of scale.

The fronds of 'Brise d'Anjou' polemonium caeruleum (Jacob's ladder) seem to sprawl excitedly out of the ground at the first hint of warmth. This is the plant that I worried over after it made a very early appearance around the turn of the year. I had wondered whether it would survive its first winter, with the warm start and the sudden temperature plunge that followed. 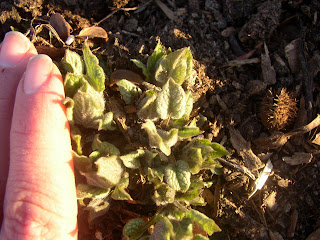 The second picture shows the felty hearts of 'Jack Frost' brunnera macrophylla, each leaf no bigger than my fingernail. This plant surprised me by making me fall in love with it--I generally do not appreciate white leaf variegation in my own garden.

Maybe it was just silver enough, or maybe the eye-popping planting around it was its ticket to acceptance? Placed at the foot of a dark urn planted with carex buchanii and 'Vodka' begonias, it shared company with black mondo grass, yellow creeping jenny, 'Chocolate Chip' ajuga, scaly buckler fern, 'Othello' ligularia, 'Hillside Black Beauty' cimicifuga/actaea, and more of those cherry-flowered begonias. 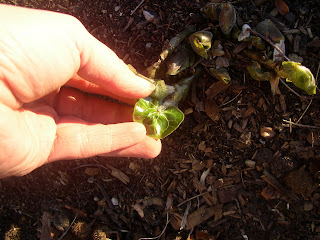 Can you guess what is sprouting in this last picture? It took me a minute to remember what these little rounds of leaves could be, but the glossiness gave them away. And then I remembered that I had trimmed several ratty leaves off of this European ginger last week. When I purchased a pint of this plant at a master gardener plant sale, it was mislabeled as the supposedly hardier Canadian ginger. I bought one pot of each, but the latter disappeared a month later and has not been seen since.

I hope that you enjoyed this little tour of what's new in my garden. If you are good at identifying sprouting perennials, by the way, amble on over to Hank's place. He just discovered that he was lucky enough to buy a house where a gardener had lived at one time, and could use help ID'ing a few things...


*edited to add: When I was 17, a guy I had known for a while showed up at my door for our first date with 3 beautiful cream-colored roses. He said that they were to let me know he appreciated me sharing the evening with him and wanted it to be memorable for me, too. I was a little suspicious of his motives, but he was a perfect gentleman. Even now, 14 years later, the thought makes me smile...
Posted by Unknown at 6:41 PM

I did enjoy the tour through the sprouts!

I'm loving seeing what's popping up in other people's plots, too. Have been taking quite a few of my own photos and posting them. Such a lovely time!

All those sprouting plants make us feel happy because it's the promise of things to come. The anticipation is usually more exciting than the fullfilment of said promise. Or something!

Lovely pics and I enjoyed the tour!

They're all cute when they're young, and they haven't gotten out of control or eaten by anything yet :-) BTW, your plant combinations with the Brunnera sound absolutely stunning! I was happy just sitting here picturing it (okay, now we all know I'm nuts. Normal women daydream about men, or shopping, or maybe food. I daydream about plant combinations....)

I do a tour every day of the yard to see what has appeared. It seems something new every day. And it is amazing that things that looked very very dead a few days ago are now full of life.

What a great journey through your emerging garden - the Jacob's ladder looks so inviting - and also through your memories ... I thought your reminiscences of the guy with the cream-coloured roses was really touching. Thanks for sharing that and making me smile this morning!

It looks like the sun is shining brightly and spring is here.

Do you have any photos of the Chocolate Chip Ajuga?

As the saying goes, Kim - "never trust a guy with cream-coloured roses!" I'm not sure where that saying came from but it's certainly helped me over the years.

BTW - I'm infatuated with your Jack Frost brunerra - it's so quaint.

The regular old Brunnera was enough to make me happy when it started leafing out in spring - I can't imagine what feelings a a 'Jack Frost' could incite. And the combinations I remember were sweet, rather than dramatic, like Brunnera with Old-Fashioned Bleeding Heart/Dicentra spectabilis and small hostas.

The plants you are growing have such a kick to them, Kim. Jack Frost with Black Ophiopogon and Carex buchanii!

Thoroughly enjoyed the pictures! You grow such interesting cultivars.... touring your garden in pictures is a treat :)

Great post and blog. I've long said that the infant of any species is irresitably cute. Have you ever seen a baby warthog? Makes you want to cuddle right up!

BTW - How can I subscribe to your blog? I don't see a RSS feed button to add it to My Yahoo.

Keep up the good work,

I do love emerging perennial foliage. It is filled with such promise.